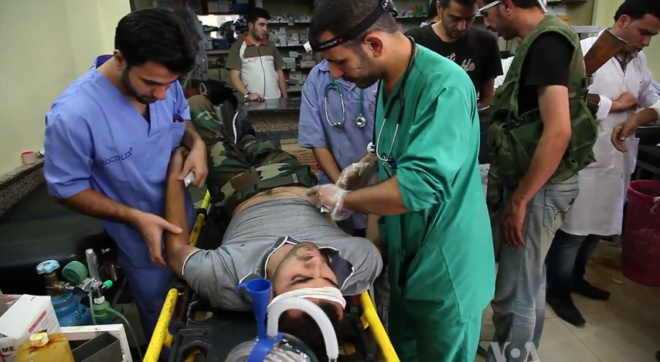 A group of doctors and pharmacists working in Idleb have announced their intention to begin a three day strike starting from Thursday in protest to violations medical workers have been subjected to in the area as a result of the prevailing security breakdown, which has been ongoing for months.

The Union of Doctors and Pharmacists working in Idleb city issued a statement in which they said that they would suspend emergency and non-emergency work in Idleb city for three days from Jun. 23, 2018 to Jun. 25, 2018, subject to renewal if the security agencies do not take responsibility and put in place the necessary measures to prevent violations.

According to the statement, the strike is “due to the increasing violations to which medical staff have been subjected to in Idleb city, the state of chaos, the lack of security, systematic policies to remove medical staff and the security agencies in the area not taking the necessary measures to prevent these types of violations, despite repeated calls to protect what remains of the medical staff who are suffering from the scourges of war and the targeting of hospitals.”

The statement called for “the immediate release of all related medical staff, particularly Dr. Mazen Dakhan, as well as revealing the identities of the security members deployed in Idleb city and its checkpoints. Security members should wear matching uniforms, be in possession of identity cards and should not arrest any member of the medical staff unless by way of the relevant union, and according to an official letter issued by the judiciary, medical staff have the right to self defense and carrying personal weapons.”

The statement added that if there was no response to their demands “we inform you that we will escalate the halting of medical services in all northern Syria.”