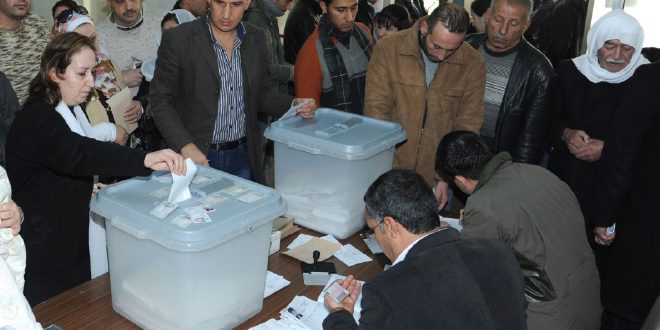 The head of the High Judicial Council for Elections, Suleiman al-Qaed, said: “We will begin to receive requests for nominations for the local administration elections,” in a decree published in the official gazette. He added that the nomination period will last for seven days.

In a statement to Al-Watan, Qaed said that the council had formed election committees for nominations that would receive requests from nominees in the provinces.

Qaed announced a plan prepared by the council for the areas outside state control, with two committees formed in Hama but with their constituencies in Raqqa and Idleb.

With regards to the liberated areas where there are no longer residents, Qaed said that the Ministry of Local Administration was logistically responsible for specifying centers in coordination with the council. He said that the areas in which elections will be run had been determined without giving any other details.

Regarding the issue of expatriates, Qaed said that voting outside the country was only for the presidency, and not for local elections.

Qaed expects that there will be large turnout for the elections and the nominations, since they had not been held for a long time. He said that a good number of migrants had returned, especially from Lebanon, to the country.

Qaed said that the elections were the right of every Syrian citizen, whatever their community. He said that the council would carry out tours from the first day of nominations to address any problems with nominations as quickly as possible.

President Bashar al-Assad has issued a nomination decree stipulating that the local administrative elections will be held from Sep. 16, 2018, after they had been halted for years. This is considered by many observers to be a step toward the country’s recovery after the return of many areas to state control.