With the liberation of the Nasib Border Crossing, it is hoped that economic activity will return to Daraa writes SANA 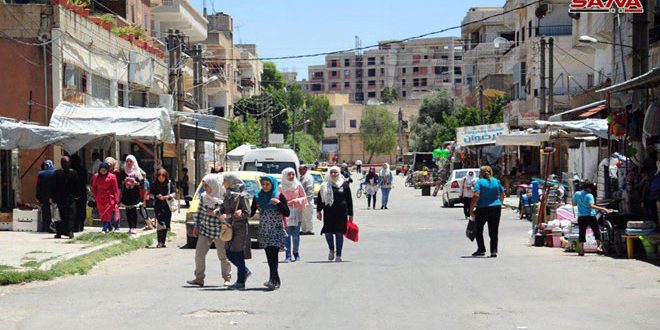 Less than two days after the defeat of terrorists in the nearby town of al-Nu’aima and the raising of the Syrian flag over the Nasib Border Crossing, the streets of Daraa city are witnessing more activity, as locals are feeling safer, after years of being subjected to shelling and sniper attacks carried out by the terrorists who had been present in the town for years.

With the liberation of al-Nu’aima and the deployment of the army at the Nassib Border Crossing, which connects Syria to Jordan, locals in Daraa are feeling hopeful that this will pave the way for the rest of the southern and southeastern part of their city to be cleared of the terrorists that remain in Daraa al-Balad, al-Sad Road and al-Nazihin Camp areas.

The victories of the Syrian Arab Army and the reconciliations that are taking place across the province have had a positive impact on activity and commerce in the city. A local correspondent for SANA said that the liberation of Nasib will have a positive impact on the economy in Daraa in particular and the rest of Syria in general after it is repaired and resumes activity.

The locals also said that al-Nu’aima had been a source of shelling by terrorists that had targeted Daraa city, and now they feel more at ease and hopeful that safety, security, and stability will be restored fully.