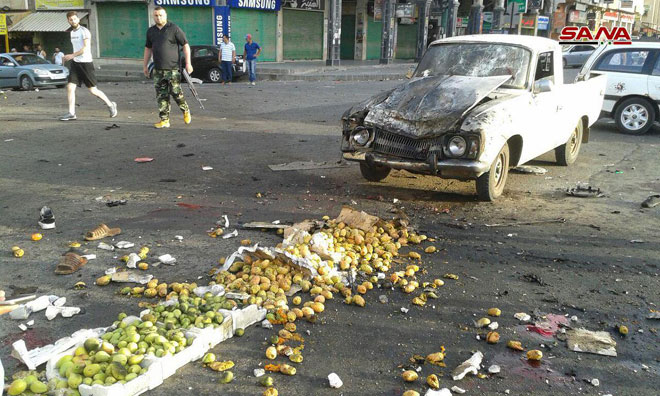 Scores of citizens were martyred and others were injured on Wednesday in a suicide bombing in Suweida city.

SANA’s reporter in Suweida said that a terrorist blew himself up in the area of al-Souq in Suweida city, and as a result a number of citizens were martyred and others were injured.

The reporter added that the authorities hunted down two additional terrorist suicide bombers who had been wearing explosive belts and killed them before they were able to blow themselves up in residential areas in the city.

Later, the authorities, in cooperation with the locals, killed a terrorist from the Islamic State (ISIS) in the area of al-Maslakh, in al-Jalaa neighborhood in the city.

Simultaneously, ISIS terrorists launched terrorist attacks on the villages of al-Matouneh, Douma, Tima, al-Shabaki, and Rami in the northeastern countryside of the province, with military units confronting the terrorist attacks and killing a large number of terrorists.

Suweida Governor Amer al-Ashshi said life in Suweida city is returning to normal, adding that all of the state’s institutions are providing services to the citizens.

The Director of Suweida Health Department Hassan Amro told SANA in a statement that the medical staff in Suweida National Hospital raised the state of readiness to receive wounded citizens, asserting that all necessary medical, emergency and surgical supplies are available.