The Syrian Arab Army has been chasing out what remains of the Islamic State in the region and evacuating terrorists, who have not agreed to reconciliation deals writes SANA 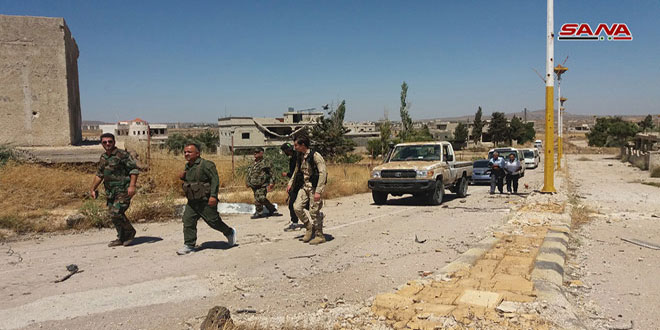 SANA’s reporter in Daraa said that army units clashed with the remaining Islamic State (ISIS) terrorists in the village of al-Qasir, as they continued to advance and encircled the last remnants in the village where their last hotbeds were destroyed and the village was declared free of terrorism.

The reporter said that the military units that broke through are hunting down the remnants of the terrorists who fled away to the neighboring valleys as a state of collapse prevailed among them, meanwhile, military engineering units are combing the village.

On Wednesday, the Syrian army extended its control over Jubbata al-Khashab town in the northern countryside of Quneitra after evacuating terrorists from the area and into northern Syria.

SANA’s reporter in Quneitra said that with the participation of the locals, the flag of the Syrian Arab Republic was hoisted over the town of Jubbata al-Khashab in the northern countryside, ending the terrorist presence and evacuating the terrorists who rejected the reconciliation settlement to northern Syria.