Mariam Hallaq is one of tens of thousands of women who lost their sons or daughters in the Syrian revolution. Her son Ayham was killed by security agents and shabeeha when he was arrested from his Medical School in Damascus University. He was 23. Below is an interview with the grieving mother. 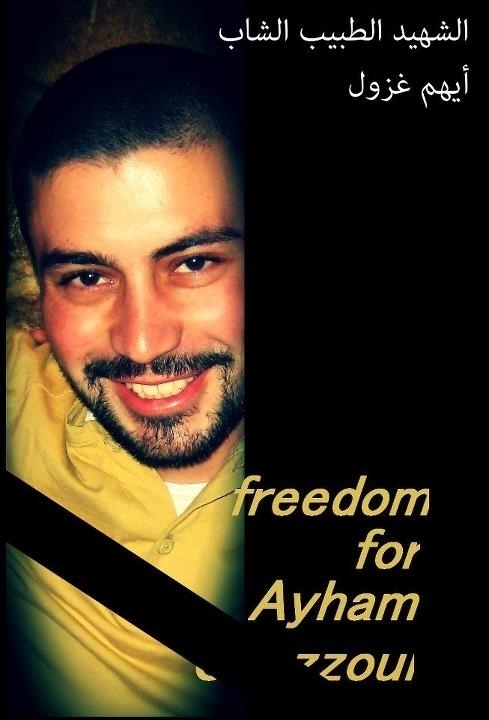 Q: The Syrian people are crying. All sides are crying, whether supporters, or oppositionists, and the price has been costly for all. What was the price which Mariam Hallaq gave before, and during, the revolution?

A: The price of my message as an educator and mother has been my health. I spent 26 years shifting between schools in Damascus and its countryside. Of those, 25 years were spent in three schools, until, at the last, I was obligated to resign.

I am also a mother of three; Ayham was the youngest. I raised my children on the values of hard work, dignity and altruism and I taught my students the same.

Many Syrians may not have known Mariam Hallaq, the teacher. But by now, many of you know me as the mother of Ayham Ghazoul, the martyr. Consider that Ayham, suckled the milk and was fed on the thoughts of Mariam Hallaq, carrying her inside him.

The national spirit was strong in all that we did. As a family, we appealed for freedom, a life of dignity and justice, and to be the regulator of our human relationships. Ayham must have cherished these values just as we did.

Q: Have you followed up Ayham’s file from his time in prison? What did he tell you after his first imprisonment?

A: When Ayham was first imprisoned on 16 February, 2012, I had left my home in Harasta, and was staying with my sister in Damascus. I was quite sure, considering the group he was arrested with, that they wouldn't be tortured. The days passed slowly. I tried to relax by checking on his health, inquiring with the different Air Force Intelligence branches and putting in visit requests, even though I expected no answer. And so that's how it went until Ayham was released from jail on 12 May, 2012. He told us about the physical and psychological torture he endured, particularly as a doctor from a village considered to be supportive of the regime.

Q: A mother’s intuition is strong. She can feel her children. Did you ever have the sense of Ayham's death before you heard the news?

A: In the afternoon, a few days after his second imprisonment, I went into his room and felt the door from where he usually enters the house open. I felt Ayham’s featureless body being thrown on the room's floor. I felt a sense of grief and catastrophe; I was sure that some big disaster had taken place and that this was the day of his martyrdom. After I learned of his death, and I saw him in that state every time I entered his room. I expelled the black thoughts and worries and began to move away from that room – but whenever I felt overwhelmed with the emotions and nostalgia, I went in to empty the load of pain and tears and bottled screams.

Q: In some moments so you meet Ayham? Do you blame him for never saying goodbye, sing a sad song for him? Remember the story of his love? Smell his unknown grave? What do you tell him when you telepathize with him?

A: Everything in my diaries reminds me of him. I call to him: My son, you moved too soon, you have not finished what you began. You‘ve almost completed the master's degree, your ambition was to have your own clinic. Your first love which I blessed and I was happy with, those sweet feelings which pleased you. I wanted to receive your pure corpse. If I had buried you then I would have stayed next to your grave for the rest of my life.

Q: Militants die too, they have mother’s cry for them and some of them believe that they‘re fighting for their existence. If they bring Ayham’s killer to you, and ask you to avenge him, what would you do? And what do you say to all the militias and their mothers?

I was, and am still, against all forms of violence. But when I knew how my son was beaten and tortured to death at the hands of those who are supposed to be his colleagues in the faculty of dentistry, that he was carried unconscious and thrown naked on the ground, remaining there for four days, bruised and dead…At that time I decided to go to the university and meet them, since they are familiar, and blow up at them.

I used to tell my sons and my students that the enemy is one: Israel. I never thought that the enemy would be my neighbor, or one of my students whom I used to call my own son, or the son of my friend. I used to say, and I still say, that all of them are my sons, but God damn those who deceived them and made them killers and monsters

Q: Cities have been ruined, spirits extinguished, whole families murdered and their children slain with knives. Who is responsible?

The regime, headed by that guy who we expected to step down as soon as the revolution started in order to accept the requests of his people. Those who wanted freedom or, at the very least, to announce early elections. But his own fears about the legacy of his family have brought us the unexpected

Most of those who have money, either those in power or the opposition were not hurt. Some opposition voices abroad are no more than talk. Some groups separated from the regime and formed similar mafias in the Gulf. Is the regime coming back to rule in a different form?

A: What happens to the opposition abroad doesn’t matter for us. I wish the civil and internal opposition military forces would unify in order to eliminate what is left of the regime politically and militarily. That way a civil internal force could start to make clear steps towards a civil, democratic Syria for which we gave our sons and our blood.

Q: Have you left Syria?

Q: Do you intend to? We all want a civil Syria. "Religion is for God and the country is for all," that was the logo of the revolution. Is that logo still applicable?

A: We hope it will be, and if things change, the Syrian people will take them back to the right path, although it may be after a while.

Q: What do you want to say to the Syrian people, of all sects and ethnicities?

I just want to say: Let us go back in our memories to recover our relationships with relatives, friends, neighbors and colleagues, to forgive who faulted and pardon those who hurt us, to hold each other's hands because what remains is the worthiest and most precious of Syria.

I don’t say this theoretically; I am the one who lost a young son, a dentist. I lost him to savages. I am the one who lost a house which was our safety. My sons lost their dear brother and their life-long home, which we built and furnished. We are now homeless, living in my brother's house, which he was forced to leave and gave to me and my sons and my sister, who also lost her house during a bombardment, along with her children and her husband.

I repeat: Let us forgive and let justice rule after the fall of the regime.