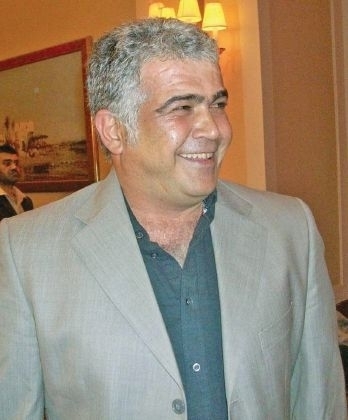 The Syrian writer Khalid Khalifa moves inside Damascus from one neighborhood to another, moving in what he describes as "bourgeois displacement". The writer says he doesn't believe he is entitled to the honor of saying he shares the suffering of real displacement in refugees camps.

Khalifa gained international fame for his his novel 'In Praise Of Hatred' which dealt with the events of the 1980s in Syria, and which was shortlisted for the International Prize for Arabic Fiction in 2008.

His novel 'No Knives in Kitchens of This City' was published during the tragic crisis overwhelming the country, and was recently shortlised for the Arabic Booker Prize 2014, along with five other novels. Although the novel didn’t deal with events during the revolution, as its main subjects deal witht he emergence of the Baath Party, the death of Hafez Assad and then the fear that inhabited the lives of Syrians afterwards, it still reflects Khalifa's position towards the Syrian revolution which he considers a legitimate way to face injustice.

Like many other Syrian artists, Khalifa was assaulted by Syrian security forces in May 2012 during the funeral of one of his pro-opposition friends. Nonetheless, the experience did not deter Khalifa from staying in Damascus, choosing to stay in his city. From one of those Damascus neighborhoods, Khalifa grated this Internet interview to Al-Hayat.

Q: After winning the Naguib Mahfouz Prize, your novel 'No Knives in This City's Kitchens was shortlisted for the Arabic Booker Prize for 2013. Do you consider this success an appreciation for your individuality in describing the Syrian complex political and social structure?

A: I don’t know why I have been nominated or why my novel was shortlisted; it was lucky to be shortlisted and lucky with the juries of Naguib Mahfouz Prize. It is well-known that each jury committee has its own measures and methods of reading and taste that agree to give the prize to a specific writer. As for my success and individuality, I am still not sure of them.

Q: May be some people wonder how you dare to write about the revolution and criticize the institutions of the state without leaving Damascus?

A: I have never been a coward or a conspirator, but I have never been a reckless either. I don’t care about anything after what has happened. Whatever I may pay is nothing compared to the pains of a detainee or a martyr who sacrificed his life for the freedom of his people. Staying inside Syria gives me a different kind of courage, different from the courage of the exiled or of those living abroad. I feel more afraid abroad and I don’t know how to justify this feeling.

Q: How do you approach the position of the Syrian regime towards literature? Did the authorities bother you after the publication of 'No Knives in this City's Kitchens'? And how did they deal with you after 'In Praise of Hatred'?

A: The authorities didn’t bother me; actually they totally ignored 'In Praise of Hatred'. This is the attitude of Syrian authorities towards the books they despise. I think they have experience in this, just as we have experience in dealing with being banned, expelled or ignored. I don’t think the Syrian authorities have changed their style, although they are more busy now and they don’t have time to keep up with these things. What is happening in the country is far more serious than following up a book that should be banned in their opinion.

Q: Aleppo, the setting of your most recent novel, is being buried under death barrels. What do you think aboutwhen you follow the news coming from there?

A: Of course what happens in Aleppo doubles my pain. The phone is not enough to check on my friends and family there. I feel disabled and I dream that I may wake up one morning to discover that things have stopped. I still hope that Aleppo will become more beautiful than before March, 2011; this is what the history of the city tells us and I hope that it will not let us down this time, too. It is hard to see the places you lived in being destroyed and you can do nothing to stop the destruction.

Q: You used the term of "life parallel to the Baath party" so frequently in your novel 'No Knives in the City's Kitchens'. Why did you describe the emergence of Baath party, its domination and the change it did to life in Aleppo as a "parallel life"? What do you mean by this term?

A: If you looked at Syrian life during the last thirty years, you would definitely describe it as a parallel life. The authorities live far away from the concerns of the majority of people who became poorer, more exposed to death and ended up hoping for nothing but to survive. This is what I tried to say in my novel. The terms of happiness have changed here during half a century.

Q: You wrote in your novel that "more than ninety percent of Syrians lived a life parallel to the party and the regime who ruled by tyranny. The two lives have never met and the country was divided into two banks. On one bank lived the mercenaries who knew nothing about the other bank, where life goes on slowly and quietly and where people knew everything about the bank of the regime". Was this division the reason behind the revolution? And why the revolution come late if the people of the rebellious bank were the majority?

A: This is one of the reasons behind the revolution; poverty, exclusion, decay and lack of hope among whole generations, discrimination and deprivation from the simplest political rights, the great corruption which led to the monopoly of a minority which gained all the powers and benefits. We can count many reasons behind the revolution, every person from the majority of Syrian society has a personal or common reason to rebel. As for why it came late, I think because the circumstances were not suitable. But the general atmosphere in the Arab countries is now ready for revolutions, Arab people are no longer able to stay apart from history.

Q: You also spoke about a feeling of shame among the characters of the novel. Did the Syrian people dispose of shame by being servile to the Baath party through their revolution?

A: They are about to, but the feeling of shame will remain inside whole generations, especially because things will not finish easily and the country will not reach prosperity soon. Our transitional phase will take a long time, just like all the countries that suffered under tyrannical regimes.

A: I think that everything will be better after the revolution for one basic reason: people will not be deprived from the right to express their problems clearly and honestly. This will be the beginning of reconciliation, and everybody will work to protect the right of citizenship which is the goal of the Arab revolutions. The ideas of justice and a personal share in the national income will help in bridging the gap between many fighting parts inside the community.

Q: Sex is an essential motivation behind the behaviors of your characters, was breaking the taboos the goal of these excessive sexual descriptions, or did you want to sell more copies of your novel?

A: I don’t think that there is excessive sex in the novel and I have never sought to attract readers from the street. Sex is a real problem for Arabs, this problem will not be solved unless through revealing its hidden secrets and turning it into daily speech without taboo, which means to resize it, to show it as a humane activity that leads to happiness, not depression.

Q: If you wanted to rewrite 'In Praise of Hatred', would you change the basis you adopted for the subject of the novel? To what extent did the sectarian hatred influence the events in Syria?

A: I don’t think that I would change anything, especially since what I wrote about in the novel has not finished yet and its traces are still present. As for the influence of sectarian hatred, I think that it influenced a lot, but I still believe that Syrian community will remain the same; a moderate and non-sectarian community, despite the efforts to intensify its sectarianism.

Q: Finally, what do you think of Geneva II negotiations?

A: There is no salvation for Syrians except through a political solution, especially since Syria's sovereignty is under threat. But the signs of this conference indicate that it will fail and it will lead to more deaths among Syrian people.