In an interview, Abdul Basset Seyda, a member of the political committee of the Syrian National Coalition criticizes the opposition for not being able to draw a political vision for the revolution 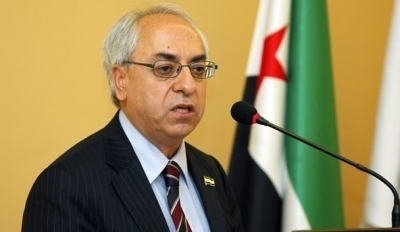 “We call for overcoming the negative forces by shedding favoritism, which has become one of the characteristic of the Coalition’s political work,” Seyda said in an interview with Zaman al-Wasl.

Regarding his position toward the announcement by the Democratic Union Party of an Interim Administration in some Kurdish areas in north of Syria, Seyda also said that it is important to involve all the ethnic and religious components in Syria. But, he asked, if the administration was successful, why does migration continue from these areas?

The following are extracts of the interview:

Describe the political scene of the Syrian crisis after Geneva II

We are now waiting for the report of U.N. and Arab League Special Envoy to Syria, Lakhdar Brahimi in his trip to the United Nations in the next few days. In terms of the political climate, the Syrian regime is certainly not serious in finding a political solution, and doesn’t even have a negotiable project for Geneva II, other than to stay in power.

At the same time, the regime is making progress on the ground while the international stance is still far removed from the crisis and has not provided any guarantees for Geneva II.

According to these current circumstances, we find that the Russian standpoint is hardening, which was obvious when the Coalition delegation met Russian Foreign Minister Sergei Lavrov, who said: "Te transitional government is a dream that is out of reach.”

It seems that the Coalition is not in harmony over attendance at Geneva II. Is this correct?

There are two approaches within the Coalition toward Geneva II. The first calls the opposition to be self-reliant and not to go to the negotiations, to depend on field developments while supporting the fighters on the ground. The other approach is betting entirely on regional and international interactions and on the international community’s decisions. From my point of view, we need to adopt the realistic direction by linking the two approaches, provided that the process is in accordance with a strategy that an effective political leadership adopts and works in coordination with those inside Syria.


The Coalition is now exposed to severe criticism from all political and military parties in addition to Syrians inside the country because of its performance. What are the Coalition's weaknesses?

The problem with the Coalition is the same since it was founded; it has always postponed its differences and weaknesses until the end of the Syrian crisis and hasn’t done anything to solve the internal problems. Because of this accumulated oversight, the problem now is that there are no political forces within the Coalition who are able to draw a political vision for the revolution, because the traditional political forces were not able to comprehend the democratic movement and that's what created a divided and sporadic opposition whicj now lacks a political project.

The solution to the Coalition’s negativity is that we should override any cronyism and stay away from the marketing, because there are many in the Coalition who market themselves as the solution. We need to take advantage of the opposition‘s first experiment and the experiences of the Syrina National Council.