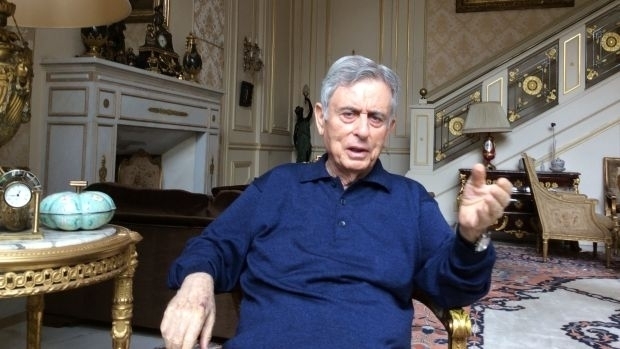 Abdul Halim Khaddam originally met Hafez Al-Assad in the early 1950s when still a student activist, the beginning of a life-long association that would see Khaddam elevated to the posts of foreign minister and then vice-president of Syria.

His relationship with Hafez’s son and Syria’s current ruler, Bashar Al-Assad, was less close. The last of Hafez’s “old guard” to leave—or be pushed out of—office, Khaddam left Syria for exile in Paris in 2005, shortly after resigning as vice-president of Syria.

Asharq Al-Awsat spoke to the former regime stalwart about Syria’s ongoing crisis, this week’s presidential election and his thoughts on the Syrian opposition.

Asharq Al-Awsat: Will the Syrian people vote for Bashar Al-Assad in the presidential elections?

Abdul Halim Khaddam: The ballots are just a pile of papers; the votes that will be cast into the ballot boxes are as meaningless as piles of paper. Those who choose Bashar Al-Assad or anyone else will be either forced to do so or they will be acting out of fear. This is not a [real] election, and everyone knows that. But Bashar is keen on conducting the elections in defiance of the international community.

Q: Who is responsible for what is going on in Syria?

There are two main parties responsible: Russia, Iran and the [Syrian] regime on the one hand, and on the other, there are the Arab countries. There is a key difference between those who kill or participate in killing and those who can stop or reduce the bloodshed. The latter is what the Arab League did when—only after six months of the [Syrian] uprising—did it consider sending [Secretary-General] Nabil Elaraby to meet Bashar.

To be honest, the situation in Syria brings to mind the beginning of the Palestinian Nakba. Another important point to make is that Syria never had extremists, nor are the Syrian people extremist in nature. But their sense of defeat and the feeling of being abandoned by the world have prompted many Syrians to escape to extremism.

Q: Why did extremist groups emerge among the rebels?

When pressures on the Syrian people increased alongside the international community’s lax position, everyone began to fight. Of course, there are those who try to exploit this unruly [public] enthusiasm.

Q: Are you referring to the Islamic State of Iraq and Syria (ISIS) and the Al-Nusra Front, for instance?

Yes, and other armed groups. However, the Al-Nusra Front differs from ISIS in the sense that the majority of its fighters are Syrians and I can assert that they will immediately put down their arms once Bashar leaves power.

Q: Speaking of ISIS: Who brought them to Syria?

Iran brought ISIS to Syria. No one has any doubts about that, and I know what I am saying. Iran is a main part of the fighting in Syria. There are the Shi’ite organizations, the Iranian Revolutionary Guards and Hezbollah, fighting alongside Assad. The fall of Assad will [be] a painful blow to the Iranian regime. If Assad’s regime falls, Iran’s presence in Iraq will be over and Hezbollah’s role in Lebanon will weaken, or shall we say, vanish.

Q: Under what scenario will Iran abandon Assad—reconciliation with the Gulf states, a wider international agreement . . .

Who said that Iran is seeking reconciliation with the Gulf [states] in the first place? Iran is seeking to temporarily calm things down until it finishes with the Syrian crisis. Then Iran will turn its attention to other countries to create conflicts, most prominently in Bahrain. Tehran will also support the Houthis in Yemen to cause tensions on Saudi Arabia’s borders. The Arab region will witness an unprecedented sectarian conflict in the coming years.

Q: If you were you still in your former position in Syria, what would you suggest doing to end the crisis?

In all honesty, after the death of Hafiz Al-Assad, I did not have any desire to be involved in any direct political activity. But I was embarrassed [not to know] how I [could] leave the partisan and political arena in peace. If one suddenly leaves, they face either death or prison. As for your question, I cannot answer it because it is speculation.

Q: There is much talk about a potential Alawite state being established in the coastal region in Syria. If this happens, what do you expect will happen to the Sunnis in the region?

This will not happen. More than 40 percent of the population in the coastal area are Sunnis. In the event the coast was taken, Syria would be a closed country with no access to the sea. Therefore, I very much rule out the establishment of an [Alawite] “statelet” . . . The present conflict may reach a stage where one part [of Syria] is more powerful than the other but not independent from it.

Believe me, if the Arab countries gave sophisticated weapons to the Syrian people, rather than [the president of the Syrian National Coalition] Ahmed Al-Jarba, Assad and his regime would fall within a month.

Q: Why are you so critical of Jarba?

Jarba has no direct relationship with the Syrian people. In other words, he has no presence inside Syria. Therefore, he will not be able to make a difference [on the ground].

Q: Are you prepared to attempt to reunite the Syrian people, or name figures capable of getting Syria out of its present crisis?

I have already tried and am still trying. I am in contact with many influential Syrians, who have been responsive. Returning to your question about Jarba: for example, out of the dozens of influential Syrian [opposition] factions leaders I contacted, only Jarba did not respond. When asked about the reason, he was reported to have said: ‘It is too late.’ I do not know why it is too late. Does he guarantee that he will go to Damascus tomorrow? He who wants to be a leader should be open to and accept everybody.

Q: What is left of the Ba’ath Party in Syria, and who represents it?

There is nothing left.

Q: Did you break with Bashar, or did he exclude you?

I decided to leave. I remember attending an hour-and-a-half-long meeting of the Ba’ath Party leadership in which I talked about what should be done in the future. By the way, I have not worked so much with [Bashar Al-]Assad. The only foreign trip I made with Assad was to Tehran before the US army entered Iraq . . l;. We went to Tehran and Bashar suddenly suggested to the Iranians that they should train Shi’ite combatant factions to fight the Americans if they entered Iraq.

Q: Why would Assad make such a suggestion when the Syrian borders were almost open for terrorists to enter Iraq?

The borders were not open in this way. But there was indeed something akin to leniency [on the part of the government] towards the access of those wanting to go to Iraq

Q: Will the Syrian crisis continue for other ten years, as has been suggested by some reports from international intelligence agencies?

If they so wish, the crisis will continue for more than twenty years. If they so wish, Assad will meet his end in one month. They need not worry much about armed groups, because they will vanish after the fall of Bashar.

This is an abridged version of an interview originally conducted in Arabic.