In an interview with Asharq al-Awsat, the U.N. envoy argues that shared Americana and Russian interests have helped reach the deal on southern Syria 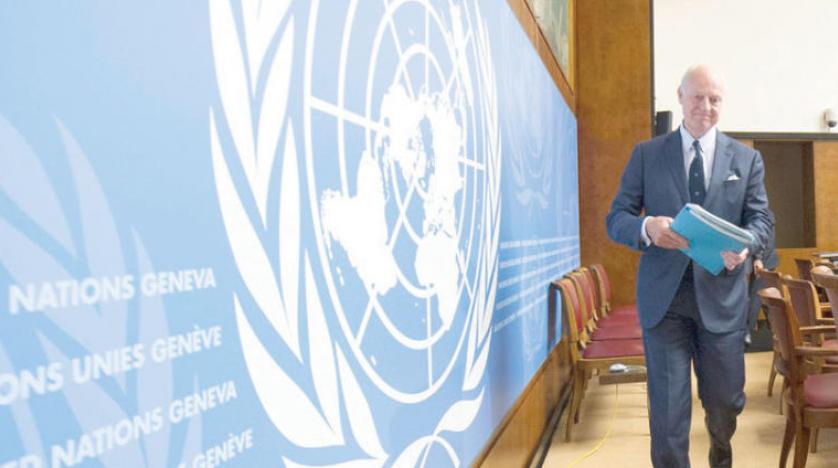 * How do you evaluate the “south’s truce” agreement between America and Russia which started on Sunday?
– Any cease-fire, any de-escalation will always be good news for the Syrian people. For that reason, we support it. Why? Because of six years of war, and I say with sadness, of the 400,000 people that may have been killed, the first thing Syrians are demanding is this cease-fire. Second, this agreement between the two presidents, Donald Trump and Vladimir Putin, is a meaningful step in the right direction. Also, this agreement was reached after a series of meetings in Amman and after the Astana meetings.

* What’s the relationship between the “south’s truce” and the Astana process?
– There is an indirect relationship to the Astana process. True, the truce was discussed in Amman and not in Astana, but it is part of the initiative and process which was launched by the Astana meetings, which created the “de-escalation” zones. We hope that the agreement over this zone and the three other zones will make an additional push, especially since the recent truce will be approved in the Astana meetings soon.

* What about the monitoring mechanism?
– Obviously, the devil is in the details and discussions are continuing in Amman around how to achieve an effective monitoring mechanism. Because every cease-fire, we have learned, cannot be sustained only on the basis of the goodwill of the parties, but rather through a quality monitoring mechanism and system. There is another point, which is that we need to remember that this truce is gradual. Therefore, it is called a temporary de-escalation zone, which should not affect the principle of the unity of Syria. This principle is something everyone is working hard toward achieving in every step we take. When there is a de-escalation zone, we expect that this will increase humanitarian aid, the release of prisoners and captives, and some actions related to de-mining, because these are important matters to Syrians.

* What would you tell Syrians worried about the “de-escalation” zones turning into a partition or zones of influence for regional and international countries?
– I would tell them clearly: I understand your concern. Perhaps your worry is that when there are de-escalation zones you may think that a partition is a fait accompli. But I want Syrians to know that the United Nations and the international community are continuously resolved that these zones are temporary and that partition will not be part of Syria’s future.

* The “south’s truce” agreement is the third between America and Russia. What’s new?
– I want to focus on the current American administration. Based on the statements and indications it is clear that there are shared interests between America and Russia. One of these shared interests is fighting and defeating ISIS. This organization may be involved in future attacks in America, New York, London, Paris, Brussels, Tunisia, Ottawa, St. Petersburg, or anywhere. The second point in terms of shared interests is the de-escalation in Syria, because it is not in the interests of either one to increase the level of the escalation of the conflict as this would increase the instability of the region and create more influxes of refugees, as well as serving the interests of ISIS, which thrives amid instability and escalation in the region. For that reason, I hope that there is a point of shared interests [between Russia and America] which is stability in Syria, and that is how to implement Resolution 2254 through the political process in Geneva.

* There are two points of shared interests between America and Russia. Are those enough to make us optimistic about this round of Geneva negotiations, and believe that this round is different from the previous ones?
– I am always cautious in terms of expectations, but I remain positive on behalf of the Syrian people. I am cautious, pragmatic and realistic. Therefore, I would say the following: Currently the shared interests are not only between Russia and America but also with other countries such as France, the Arab world, Turkey, and every country in the region. Everyone wants to end the conflict, and at least reduce the level of violence to a level of non-escalation. But nevertheless, we must remember that the devil is in the details. There were developments that previously contributed to the escalation. I do not expect that there will be a breakthrough in this negotiating round because we are in a stage of preparation for the moment in which the breakthrough can be achieved. We are carrying out cumulative preparatory work. The Astana process is an example. Everyone thought that it would pass quickly, but what happened was cumulative work and then the de-escalation zones. This is similar in the Geneva process. It is like the Astana process in that it will not achieve a breakthrough but rather cumulative, positive progress in preparing for the moment when we can begin real negotiations.

* If we discuss the spoilers of the political process or the de-escalation agreement, we know that the terrorists and groups such as ISIS or the Nusra Front, classified as terrorist groups by the United Nations, have an interest in not stopping the escalation. Are there regional spoilers? Some talk about militias and Iran. What do you say?
– I have learned that in every cease-fire agreement there are subversive initiatives from some parties. I will not name anyone now but Nusra and ISIS. What I know is that there is a strong and steadfast will between two great powers, Russia and America, and there are agreements between countries such as Iran, Russia and Turkey in Astana, and that each of these parties will have a positive impact on the agreement. Therefore, these parties will be able to control the subversion if there is any.

* The Kurds are a political and military force and the Syrian Democratic Forces include Kurdish fighters with support of the American-led international coalition. Has the time come to include them in the political process, especially given that there is talk about Syria’s future and the new constitution?
– Let me be very specific about this point. In the recent interview with the Russian Sputnik news agency, when I answered a question on whether the Kurds should be part of the future negotiating process around the new Syrian constitution, I was referring to the Kurdish community and not to any specific political or military group. I think that no one can deny that the time is not yet ripe because we are in the pre-negotiations stage. When there are negotiations around the constitution, the Kurds are Syrians and they should have a chance like any other community to express their views.

* Yesterday you met with representatives of opposition groups. What was your message to them? Do you want them to be more united, or at least have a united position?
– One of the opposition’s points of weakness, or the government delegation’s impression of their weakness at least, is that the opposition is divided. But I believe that at this important and fundamental moment I want to help the various members of the opposition, in accordance with Resolution 2254, to reach some common ground. What we are trying to do is not to reach a united opposition, because this may take more time, but at least to reach a united position around issues such as the constitution and elections or on any of the “four baskets” [which include governance, the constitution, elections and fighting terrorism]. This at least will increase trust and will lead to a positive result and influence in the negotiating process.

* As a mediator, you want the implementation of Resolution 2254 and negotiations around the “four baskets.” What is your understanding of this resolution? And what is the most appropriate way to implement this resolution?
– You have asked me a question I should not answer. This question is for the Syrians to answer. This is exactly the task of the mediator. Resolution 2254 is clear and specific as a guide. The task of the mediator is how the Syrian parties can reach common ground and implement the instructions of Resolution 2254. My task is not to make pre-judgements.

* We know that Resolution 2254 calls for the formation of a government, drafting of a constitution and preparation for elections. If this is not achieved, will you look for other areas for a breakthrough, such as forming a joint military council or a technocratic government between the Syrian parties?
– As I said before, you will have to forgive me. I will not give specific details, but would prefer to discuss in a positive way with the Syrian parties. Only then will I be able to discuss some of these matters openly.

* Simply put, are you optimistic about this round of Geneva talks in terms of achieving something tangible and in a different way from the previous rounds?
– I am realistic. Perhaps this specific week will achieve some cumulative advances in understanding some preparatory work which needs to be done. For example, sometimes, in the Arab world or some other place, some say: “Mr. de Mistura, what do you do with this cumulative and preparatory exchange on the Syria issue? We don’t see major results.” My response is: Remember what I’m doing. In Afghanistan or Iraq when it was a major issue years ago, at that time there were discussions and meetings in Geneva and elsewhere around details. Some were saying that I was a waste of time. But then one day there was a decision to hold an urgent conference in Bonn. There was urgency and there was no time to prepare. But every party discovered that all the work which we had done had made the Bonn conference a success. This is the angle from which we must view this issue and the hard work that we are carrying out here [in Geneva] these days.