By establishing itself again as the sponsor of settlement agreements in southern Syria, Russia was able to consolidate its influence in the Jordanian border area, according to Asharq al-Awsat. 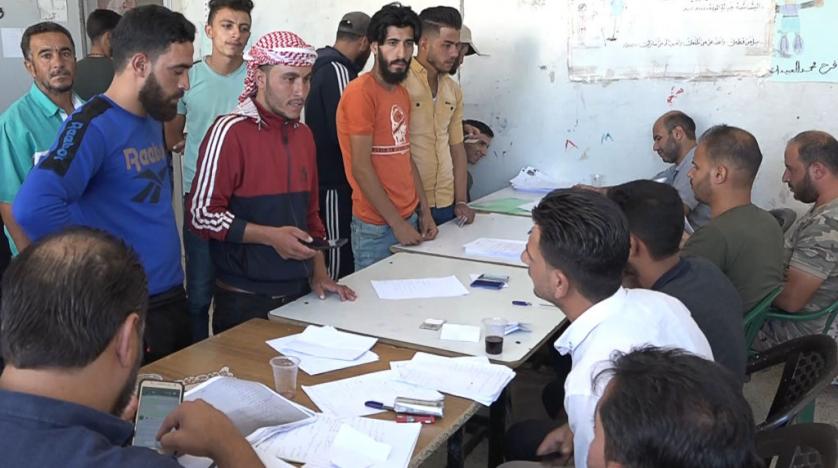 Russia and the Syrian regime established a center for settling the status of gunmen, wanted individuals, and military deserters, and handing over their weapons in Nassib town, near the Jordanian Border.

The agreement, based on the settlement agreement proposed by the state in August, started in Nassib in the southern Daraa province.

The center implements the new Russian map agreement for the settlement areas in southern Syria, which includes handing over light and medium weapons in the region.

The previous agreement in 2018 allowed former opposition fighters to keep their weapons.

Local sources in Nassib said a security committee of the regime arrived at the center to implement settlements. It will work with the Russian police and local forces from residents affiliated with the Military Security department.

The agreement includes several areas on the border, which are considered areas of influence affiliated with the former commander of the Yarmouk Army, Imad Abu Zureik.

Abu Zureik has been in charge of these areas within the military-security apparatus since the settlement agreement in 2018.

Previously, the Ninth Division al-Sanamayn, located north of Daraa, met with the security committee of the regime and the Russian forces in coordination with Abu Zreik, who heads a group working for the military security in these areas.

The meeting included officials from Nassib, Umm al-Mayathen, and al-Taibah.

The Nassib crossing is strategically located on the Damascus-Amman International Highway and it recently reopened following an agreement between the Jordanian and Syrian governments.

It is one of the most critical areas of the military security’s influence and boasts a large group of volunteers, who are affiliated with Abu Zureik.

Abu Zureik returned from Jordan after the reconciliation agreement in 2018 and formed affiliated groups working for the military security, namely in Nassib, Umm al-Mayathen, and al-Taibah.

Informed sources said the Russian map would include Giza and al-Mutaiyah in the eastern countryside of Daraa. The agreement was reached following a meeting with local notables from Daraa al-Mahatta on Saturday.

They added that the new agreement includes areas adjacent to the Jordanian border, including the police stations within the administrative boundaries of Daraa.