Assassinations are continuing to plague southern Syria, with members of the Central Committees, who are trying to implement the reconciliation agreements, being targeted reports Enab Baladi. 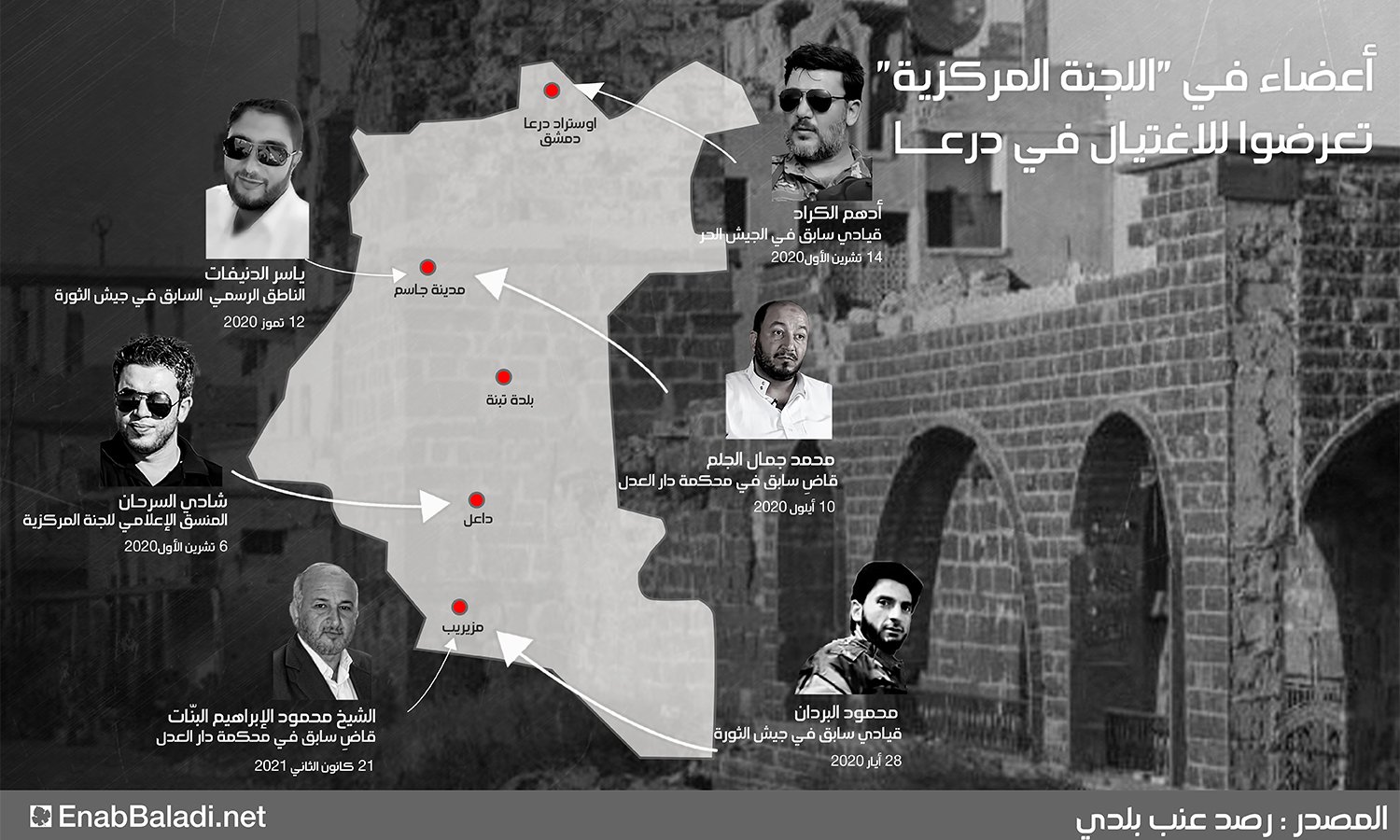 The Central Committees in Daraa Governorate were formed in 2018. The committees are tasked with negotiating and implementing the settlement agreement, after the regime spread its control over the southern region.

The last person to have been targeted was a member of the Central Committee for the Western Region, Mahmoud Ibrahim al-Banat.

Banat, the former judge of the Dar al-Adl (“Abode of Justice”) court in Nawa, was killed outside his house in the town of Muzayrib in the western countryside of Daraa, on Jan. 21, 2021. He was subjected to a previous assassination attempt in July 2019, by an unknown perpetrator. The latter targeted a convoy of the Central Committee, on May 28, which resulted in the injury of committee member, Mahmoud al-Bardan, a former leader of the Army of the Revolution, who was severely wounded, and the killing of four bodyguards. Committee members pointed the finger of accusation at the Islamic State (ISIS), who did not claim responsibility at the time.

On Jul. 12, a member of the Central Committee from the northern countryside of Daraa, Yasser al-Danaifat, nicknamed Abu al-Bakr al-Hassan, the official spokesperson for the Army of the Revolution, was assassinated. The Army of the Revolution was one of the southern front factions during the opposition’s control of the governorate.

On Aug. 15, a member of the Daraa Committee, Ramzi Abu Zeid, died in a minefield in northern Syria, while he was trying to migrate to the opposition-held areas.

Last September, a committee member, Sheikh Abu al-Bara al-Jalam, was assassinated outside his house in the city of Jasim. Jalam was a judge at the Dar al-Adl in Nawa. At that time, Faisal Abu Zeid, accused one of the committee members, in a post on his Facebook page, the head of the Security Committee Chief in Daraa, Maj. Gen. Husam Louka, of being behind the assassination.

On Oct. 6, unknown gunmen on a motorcycle shot the media coordinator of the Central Committee, Shadi al-Sarhan, in the city of Da’el.

On Oct. 14, unknown persons assassinated the former leader and member of the Central Committee, Adham al-Karrad, on the Damascus-Daraa road, after his car was shot at, and bombs were thrown in its direction until the vehicle caught fire.

The Central Committees are made up of former Free Army leaders, dignitaries, and civil activists. Their work centers around negotiating with the Russian side and the regime regarding the implementation of the terms of the settlement agreement. The terms relate to the release of detainees and agreeing on the fate of the dissidents and dismissed state workers.

A member of the Central Committee, who requested anonymity, told Enab Baladi that since its formation in October 2018, the committee has been subjected to security risks, “whether from the regime or the Islamic State.” Moreover, it is the “obstinate” security forces that hindered the Russian side’s implementation of the promises of implementing the settlement agreement, according to his opinion.

The former head of the Free Syrian Lawyers Association (FSLA), Suleiman al-Qarfan, believes that those behind the assassinations are the militias affiliated with and loyal to Iran, “because the central committees today are standing against the Iranian incursion into the south and fighting its presence,” he told Enab Baladi.

According to Qarfan, the popular resistance in the south escalated its pace after the committees united and the regime and its Iranian allies became fully convinced that they will not be able to extend their influence over the south “if the central committees are present.”

Over the two and a half years that the regime forces and Russia have been controlling the southern governorate, assassinations, kidnappings, and security tensions continued to take place. They were chalked up to the struggle for influence by the Russian and Iranian allies.