With the start of the Biden administration, decisions must be taken to as to how the US will proceed in Syria and what their next steps will be writes Arab News. 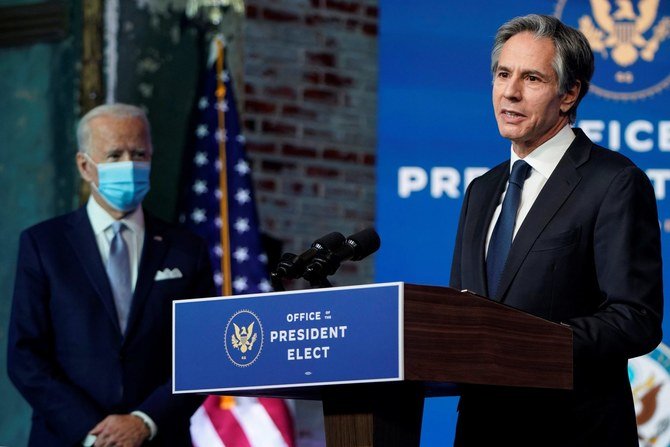 As the conflict in Syria nears its 10-year anniversary, the new Biden administration in Washington must decide how to shape US policy on this issue. As the administration names people to key positions, it is becoming clear that President Joe Biden is likely to take a more engaged yet pragmatic approach toward Syria.

The approach to Syria will be set within the administration’s broader Middle East policy, which will re-establish diplomacy and human rights as priorities. The emerging foreign policy team appears to take a nuanced view of using US military assets in the region, with strong opposition to large-scale military interventions but a willingness to use smaller military forces to pursue counterterrorism and other missions.

The Biden administration is very likely to view preventing any resurgence of Daesh as its top priority, but it also will view the refugee crisis, regional stability, human rights, and limiting Russian and Iranian influence as important issues in its Syria policy. However, Syria is likely to rank relatively low on the list of global and even regional priorities. Managing the pandemic, strengthening alliances, and addressing Iran’s nuclear program will take precedence.

Biden was vice president at the start of the Syrian civil war. Many members of his new team also served in the Obama administration and some feel a sense of regret for US policy failures in Syria. Antony Blinken, nominated for secretary of state, has suggested that he feels a responsibility to do better now. Some likely administration leaders have suggested that they learned lessons from their previous experience, and no one should assume that those who served under President Barack Obama will pursue exactly the same policies now. Indeed, there is widespread awareness that the Middle East has changed, the US has changed, and the individuals themselves have changed.

Biden and his team have revealed little about their Syria policy. The information available so far suggests that the administration will seek to increase diplomatic pressure on the Assad regime, including through rebuilding coalitions to pursue a political process to end the war. While diplomacy will play an essential role, there is widespread support among foreign policy officials for maintaining the current small military force in Syria and potentially increasing the military presence in a targeted way. The main purpose would be to counter a Daesh resurgence, but also to provide support to the Syrian Democratic Forces and to pressure the Assad regime.

The new administration is also likely to resettle more Syrian refugees and provide more humanitarian aid, including in Idlib. It will likely oppose reconstruction aid that might benefit the Assad regime unless there is a political process in place, although the administration’s position is not fully clear. Under Biden, the sanctions imposed by the Caesar Syria Civilian Protection Act will likely remain in place.

Statements by leading officials highlight a pragmatic mix of hard and soft power, though there are likely to be disagreements about how to apply those tools to Syria. Biden criticized Trump for withdrawing troops in 2019, saying that it betrayed the US’ Kurdish allies and damaged its “moral authority.” Blinken also criticized Trump’s troop withdrawal and expressed support for maintaining some military presence in Syria. Jake Sullivan, Biden’s national security adviser, reportedly advocated for arming anti-Assad rebels during the Obama administration but has since appeared to modify his views on the effectiveness of military interventions. Brett McGurk, selected as Middle East coordinator for the National Security Council, resigned from the Trump administration over the withdrawal of troops, which he strongly criticized, and he is known as a critic of Turkish policy in Syria. Dana Stroul, Biden’s pick to lead Middle East policy at the Pentagon, has advocated for maintaining a counter-Daesh force in Syria and co-chaired the Syria Study Group, which offers several recommendations.

The Biden administration faces many challenges in Syria. In addition to the many internal problems and the refugee crisis, there are multiple external stakeholders that have complex or hostile relations with Washington. Biden will be less willing than Trump to accommodate the leaders of Russia and Turkey. The administration faces a challenge in trying to manage different strands of Iran policy. After a decade of war, Syrians have little faith in Washington’s ability to improve the situation, but few other sources of hope.

After a decade of war, Syrians have little faith in Washington’s ability to improve the situation, but few other sources of hope.

The Biden administration also has some opportunities. The new foreign policy team is likely to re-evaluate the US’ overall regional role and place Syria policy within a refreshed understanding of what Washington can accomplish in the region. Many European allies are keen to work with Biden to address concerns, including the Syrian war’s impacts on Europe. While Biden has been critical of Turkish President Recep Tayyip Erdogan, the new administration has ideas for a reset in relations with Ankara. The Biden team believes in the value of strategy and will try to set pragmatic goals in Turkey with the means necessary to achieve those goals. The new administration has significant opportunities to maintain a coalition that ensures Daesh cannot regain power.

Washington alone cannot resolve the Syrian war and the Biden team is not interested in nation building. Syria will not be a top priority, with the administration taking a pragmatic approach with limited goals. However, Biden has significant opportunities to set policies that might help put Syria on a more positive track for the future.