With Russian approval, President Assad has been allowed to run in Syria’s next election, but he could be made to make changes to the constitution writes Annahar. 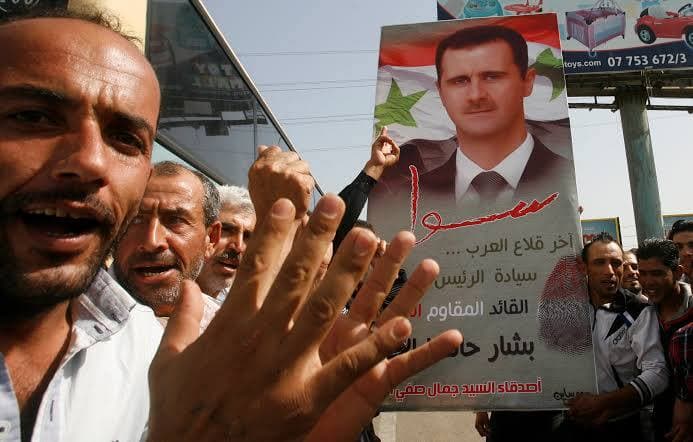 In mid-November, Bashar al-Assad began putting together the team to organize his election campaign and add a few tweaks here and there for the candidate whose victory has already been declared, despite that those loyal to him are suffering from terrible living conditions. However, Assad had been waiting on Moscow’s approval and was worried, back in September, that the Russian delegation that visited him was not enthusiastic about addressing the elections issue, rather asking him to wait.

Therefore, during a press conference with the delegation where tensions were high, the late Minister of Foreign Affairs, Walid al-Muallem, was keen to confirm that the elections will be held on time and separately from the work that is being done by the Constitutional Committee in Geneva.

Moscow was not opposed to the re-nomination of Assad, but rather its priority was concerning the conditions that he should meet, the most important of which was its economic project that included 19 agreements that were discussed in 2019 in Sochi and are related to Russian investments in the electricity, oil and gas, industry, and the construction sectors.

In early October, Assad signed most of the agreements in Moscow, where a debt schedule was agreed on — estimated at about 3 billion dollars — and ownership was transferred for projects and real estate he had previously acquired for the regime on the Syrian coast. After that, Moscow ordered the regime to host the refugee conference, in order to inform regional and international bodies that Russia now has leverage concerning the refugee issue, knowing that the real obstacle blocking their return is the regime’s existence and its practices.

After a long discussion, during the visit of the new Foreign Minister, Faisal Mikdad, Moscow agreed to nominate Assad, and approved the presidential elections, to be held in late May-early June. Russia did, however, set conditions, including enabling others (nominated by Moscow) to participate in the race and for Assad or his government to take measures including dropping the two conditions for nomination (having resided in Syria for the past 10 years, and the approval of 35 members of the People’s Council), with a plan to engineer results so that Assad wins by about 65 percent, which would allow Moscow to promote him as a legitimate president.

Among the conditions are also the issuance of pardons and the release of detainees, the issue where the Russians could not make progress, as they discovered that most of the detainees were no longer present. The regime devised a solution by finally doubling the detention campaigns, at the rate of hundreds a day, then releasing the detainees to buttress the electoral campaign. In the same context, sources close to the regime say that intensive operations have been carried out to set aside dollars and fuel, with the aim of re-pumping them in the market and create a relative living standards breakthrough, in conjunction with the announcement of the election date in February.

Assad is betting on staying in power, and he is not wrong to think that, especially since outside powers never expressed wanting his departure, which was reflected in operations that affected the Syrian geography, some of which derived their legitimacy from Russia and Iran and resulted in destroying the biggest cities and sending half of the Syrian people into homelessness. Other operations derived their legitimacy from the Russian subcontinent (Turkey and Israel), or from fighting terrorism as justified internationally and by the Americans. Various legalities have been clashing overtly and implicitly, all while keeping Assad legitimate by making people believe that his signature is necessary for constitutional reforms, under the pretext that he will sign on a reduction of his powers and control his regime’s tendency for brutality, or even recognize the existence of the Syrian people as individuals who have legitimate rights and are not just the subordinates of one sect.

The upcoming presidential elections will be the first since the issuance of UN Security Council Resolution 2254 in 2015, which, had it been implemented within the specified timeframe, would have changed all scenarios. However, the regime was able to dilute the implementation with the complicit planning of the Iranians, and it was able to void the decision of its content through a collusive tactic with the Russians, inserting the missions of the UN envoys Staffan De Mistura and Geir Pedersen into the mix, until Resolution 2254 was reduced to the Constitutional Committee that the Russians control and ignore daily as they work at creating the political solution they have always wanted within the confines of the Assad regime.

Assad’s survival could only mean one thing: Syria and the Syrians are denied any form of hope. The country is devastated and bankrupt, and its president has no justification for continuing, except that he exhausted his alternatives long ago, and the ghost of the Islamic alternative enabled him to silence those calling for his departure. What helps him today is that the US is using him as a means to drown Russia in Syria, while Russia is using it to compete with the US by pushing it towards a peace with Israel. A normalization of relations could be possible for Assad, but perhaps after the elections.