Syria and Israel have been on opposite sides for decades, but recent rumours have suggested that secret negotiations are taking place between the two countries writes Asharq Al-Awsat. 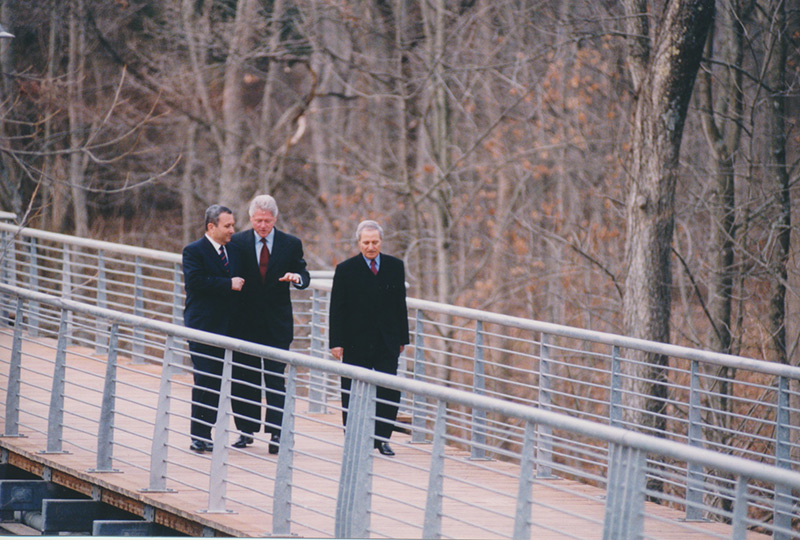 On an autumn evening in 2011, we heard the sound of intense gunfire in the air, in what could have been a celebration. As a group of opposition intellectuals and politicians, we had become accustomed to meeting to discuss the developments of the peace movement in Syria and the regime’s assaults on defenseless protesters to break their will…The meeting was held in a house on the outskirts of the Qudsaya suburb, which is surrounded by neighborhoods inhabited by regime security and military cadres and officers. At first, it seemed strange and alarming, and we were skeptical that something extraordinary had occurred… We gathered our papers and rushed out of the area…The shock came when we looked into why those bullets had been fired; the regime issued a directive to celebrate a message of reassurance sent by Israeli leaders that they had not abandoned their preference for the current regime and were against toppling or changing it!

A decade earlier, a Popular Front for the Liberation of Palestine official was asked: Why don’t you make use of the Golan Heights to launch attacks on Israel? A frank answer came swiftly that perhaps it might be possible to evade the Syrian forces’ extreme surveillance there, for once! But after that, the Baathist regime would increase surveillance and harshly punish those who violate its stringent parameters of action and the integrity of its borders with Israel, and it would ravage our comrades and cadres in Syria, Lebanon and Jordan, blocking the path of anyone who thinks, even merely, about crossing over through the Syrian border.

The mutually beneficial roles are transparent; there is no ambiguity or contention around them. They are contained by a wager, let us say an old reliance on the Syrian regime to satisfy the state of Israel so that the latter ensures the regime’s survival and perpetuity. The regime promotes itself as the best protector of border stability. Sometimes to avoid a direct war that could weaken its military and security pillars, and other times because it is aware of Tel Aviv’s apprehension of a change in Syria that would threaten its interests and security. Also, the Israelis have a strong influence on the international community’s stance on the future of the country that neighbors them and part of whose land it occupies. This is not to say that the regime in Damascus does not, from time to time, activate its political and media tools to raise the issue of the occupied Golan Heights and invigorate hostility to Israel or exploit this issue to establish a “national legitimacy” that allows it to rationalize its control of the country’s economy and appropriation of its wealth.

It also makes use of its alignment with the so-called “axis of resistance” to blackmail some Arab state, and more importantly, justify its repression and subjugation, not only of the Syrian society, which has suffered from both oppression and discrimination under the pretext of bogus nationalistic slogans, but also Palestinian and Lebanese forces, who were harnessed to enhance the regime’s regional influence. In some cases, going as far as waging proxy wars and battles. It did so in south Lebanon in 1978, 1982, 1996 and 2006, and in Gaza in 2008 and 2012.

On the other hand, Tel Aviv met this approach optimally. It chose the Syrian regime, seen as a time-tested protector of the Golan front, keeping it safe and stable for decades, since the 1974 Troop-Separation Accord. The Israelis did not hesitate to support or delay their support for its survival and perpetuity at several critical stages.

Whether this was done to alleviate the military and security burdens required to protect their border and its stability or to safeguard their deep interest in the continuity of oppression and corruption – being the tools of governance in Syria, with the containment of the society’s invigoration it entails, it is always accompanied by an inherent hostility to the emergence of a democratic regime in Syria that could trigger a strategic transformation of the status quo, and potentially develop the country and enhance its ability to genuinely demand the retrieval of the occupied territories.

An Israeli official explicitly referred to this issue, saying that what happened and is happening in Syria is priceless, as nothing could make Syrians forget the occupied Golan except for being mired to their ears in violence, disintegration and devastation!

From this angle, we can look into the explicit warnings raised by Israel leaders about the Syrian revolution’s victory and how it would threaten their security, in addition to the advice they gave to the White House to reduce the pressure being exerted on the regime, as well as Israel’s push to limit arming the Syrian opposition with high-grade weaponry that would render it capable of altering the balance of power, and their rush to announce their total support for Russia’s military intervention and, before that, their views on the role of the Iranian regime and Hezbollah’s decisive intervention in the Syrian conflict.

This reality does not negate, indeed it affirms, their wagering on the sectarian strife by killing off top Hezbollah cadres and whatever is left of its reputation as a resistance movement. It also does not negate their push to contain Iran’s influence in Syria, after Russia’s military weight increased, by launching airstrikes on the Revolutionary Guard’s most prominent site in rural Damascus, Daraa, Homs and Latakia, and preventing advanced weapons that could change the status quo from reaching Hezbollah.

There can be no smoke without a fire, and perhaps what has been said about secret negotiations between Israel and Syria or Moscow pressuring Damascus to negotiate with Te Aviv is true. Maybe it is true that the weak and besieged regime, today more ever before, needs to knock on the Israeli gate, seen as a quick and guaranteed way to open the door towards the West and to refurbish itself internationally. However, with its weakness and dependence, it is also true that it still needs nationalist demagoguery to promote itself to the people, its dubious alignment with Iran, and its heinous crimes against the Syrian people. This need explains the media campaigns against unilateral agreements and the reiteration of a holistic solution and the application of the land for peace principle as being requisites for normalization.

Everyone knows no agreement could give the Golan Heights back to Syria. Israel will not give the regime while it is weak that which Israel hadn’t been willing to grant when the regime was at its strongest. The potential for normalizing relations with Damascus to serve as a gateway to opening up to the Arab world has lost much capacity after the initiation of border demarcation talks with Lebanon. When we highlight the fact that nothing indicates a change in the implicit agreement between the Damascus and Tel Aviv’s rulers or their mutually beneficial arrangement, one would not be wrong to ask: What need is there, then, for negotiations between Syria and Israel?