The third round of the Constitutional Committee has come to an end and those involved believe that it was successful and some progress, however small, was made writes Al-Modon. 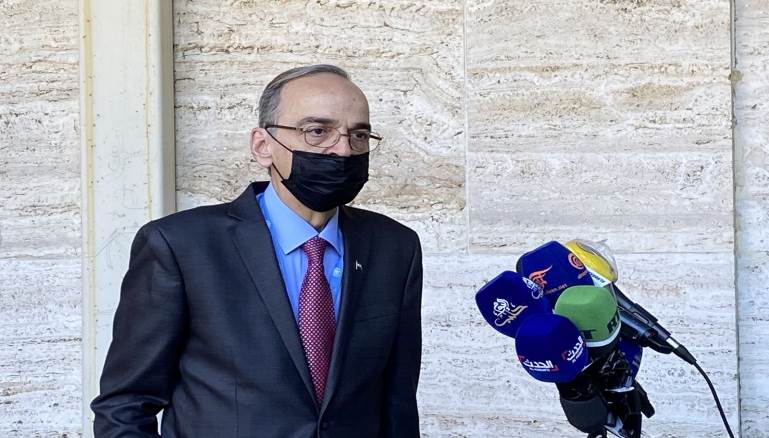 Although not much progress has been made, the third round of the Syrian Constitutional Committee meetings can be described as positive, especially since meetings were resumed after a months-long hiatus as a result of the coronavirus, which disrupted the sessions yet again after last Monday, for 48 hours.

The sessions, which were scheduled to be concluded on Friday, were extended for an additional day, due to the interruption. Two sessions were held on Saturday, while the regime delegation refused to extend the meetings for another week, which is an expected reaction given the regime’s attempt to avoid participating in this round that would not have happened in the first place had it not been for the international pressure, especially from the US and Russia.

After the conclusion of the third round of meetings, UN Special Envoy to Syria, Geir Pedersen, said that “this round has made some progress,” adding that “there were major differences in views between the two parties.” He confirmed that he had received a message from the co-presidents of the two opposition delegations, represented by Hadi al-Bahra, and the regime delegation, represented by Ahmad al-Kuzbari, confirming their eagerness to meet again in a new round of the Syrian Constitutional Committee, indicating that the date will be set after agreeing on the agenda with the two parties.

A member of the opposition delegation in the Constitutional Committee, Yahya Aridi, told Al-Modon that, “the positivity in this meeting emanates from the fact that the delegation of the High Negotiations Committee (HNC) and the civil society delegation tackled constitutional matters, despite the regime’s attempts to avoid even using the word constitution. This is the first step in the journey of a thousand miles.”

Member of the civil society delegation, Edouar Hashweh, saw that there was less tension in the air in the last round than the previous one, as the regime changed the name of its delegation from the “government-backed delegation” to the “national delegation.” The regime made sure not to burn bridges, should it decide to not take the results into consideration. This is despite the UN memo that called for a meeting between the regime delegation and the opposition delegation.

Hashweh told Al-Modon that, “the other aim behind the regime’s adoption of this method is to not recognize the opposition, which has become an international party and a legitimate side in the negotiations.”

Co-president of the Constitutional Committee, Hadi al-Bahra, demanded after the end of the round that the regime delegation meet as soon as possible to move forward and realize the goal of the Constitutional Committee, expressing his hope that the agenda would be “clear with the items specified in the next round.” He stressed that no single party can achieve a definitive military victory in the country, stressing the need to activate the political process.

The problem in Syria is not only related to the constitution; it is also linked to implementing the provisions of this constitution, respecting it, and not bypassing it. However, the current constitution is a presidential constitution, which the opposition rejects.

Hashweh believes that attempts to amend the current constitution and adopt it as an alternative to a new constitution will fail, as the opposition has vehemently expressed its rejection of the presidential system. On the other hand, it is unlikely that the regime would accept any fundamental amendments. According to Hashweh, “How can we, for example, approach the text of Article 114? By using the current constitution, the president has the right to do whatever he pleases in times of crisis?”

Aridi believes that writing a new constitution for Syria does not solve the crisis nor does it bring the country back to life.

He explained that the Syrian issue has been internationalized, and Syria has become an arena for settling scores. Reversing that would have a positive impact on Syria, according to Aridi.

Russian Special Envoy to Syria, Alexander Lavrentiev, addressed the HNC delegation, saying, “Do not think too much about Bashar al-Assad, for he will not be an obstacle,” according to Aridi, who added, “Let us take this statement seriously and put it to the test. Perhaps Russia will gravitate from a tactical approach to a strategic approach.”

Aridi added, “America included in the Caesar Act the regime’s involvement in the political process as one of the conditions for lifting sanctions, and the positive atmosphere that prevailed in Geneva is one of the products of this law that the regime and its supporters fear, as it has prevented them from reaping the fruits of all their violations against the Syrian people.”

He continued that, “had it not been for the current negotiations in Geneva, the efforts of the regime and its supporters would have succeeded in burying the Syrian issue on the international front, as the regime has made military wins in most of the Syrian lands, except for the north. Therefore, were it not for these efforts, the regime would have been able to do whatever it wants in Syria.”

Hashweh said that, “It is possible to build on the results, negatively or positively, to pressure the international community to find a solution that may be a constitutional declaration for the transitional phase, in the event that an agreement on a new constitution fails.” He added that, “many have not lost hope while some still consider the matter a hindrance, but I expect that should the committee meetings fail, the international community will eventually step up and agree on a military-political council solution.”

The procrastination on the part of the regime delegation and their attempt to waste time, and the seriousness of the opposition and civil society delegations were the highlights of this round. The latter will be followed by subsequent rounds during which a new constitution will be drafted.

The chances of success of these efforts are not clear yet in a country where the cards are constantly being reshuffled based on regional and international developments.