President Bashar al-Assad has visited the city of al-Qardahah to smooth things over with the Makhlouf family, following his falling out with Rami reports Al-Modon. 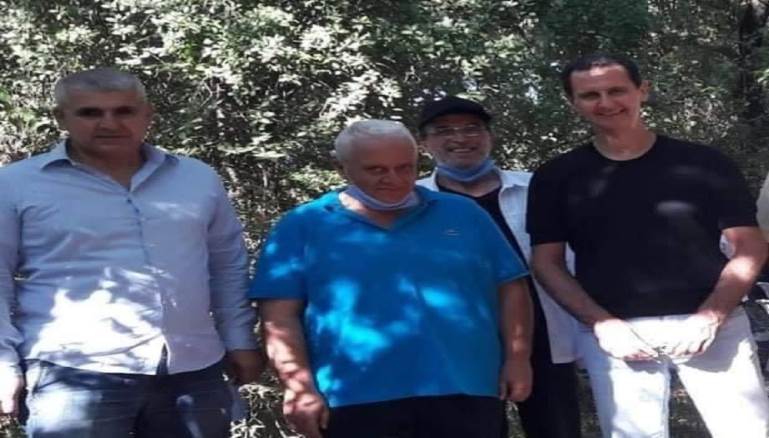 Many questions are left unanswered following president Bashar al-Assad’s visit to the city of al-Qardahah. Chief among which are: Has Assad succeeded in his endeavor to patch things up between his family and the Makhlouf’s, after the relationship between them deteriorated after many properties belonging to Rami Makhlouf were seized.

Informed sources told Al-Modon that Assad’s mission behind the visit, which witnessed meetings between Assad and the dignitaries of the Assad and Makhlouf families, was not a difficult one, given the kinship ties between the two families.

It was assumed that Assad’s mission would not be easy, given Makhlouf’s economic prowess along the Syrian coast and the prominence of his family. However, it seems that economic interests govern relations within the Alawite sect, regardless of family ties.

The Makhlouf family is considered one of the most prominent Alawite families, and a number of the al-Qardahah families (the Assad stronghold) have strong ties with it. The Makhlouf’s economic and political power has been escalating for the preceding decades.

The concessions Assad made to Ihab Makhlouf, Rami’s brother, including awarding him the contract to operate duty free markets seem to have returned some serenity to the turbulent relationship.

The director of the Sham Center for Democratic and Human Rights Studies, Alawite opposition figure Aktham Na’issa sees that, “handing over a part of Rami’s companies to Ihab has contributed to appeasing the Makhlouf family, as the acquisition returned to the family some of the great privileges it had lost”

Na’issa added that pushing Ihab, who has a weak personality, to the forefront of the Makhlouf family, is a step in the right direction to finding a solution to Assad’s tension with Rami.

He told Al-Modon, “Rami enjoys considerable popularity with the Alawite sect, thanks to the al-Bustan Association’s assistance to the community’s disadvantaged, and his position began to be buttressed as a result of the erosion of Assad’s popularity, after the poverty and hunger that the sect paid as a price in Assad’s war.”

This confirms, according to Na’isa, that Assad’s visit was successful in terms of restoring family relations, considering that, “the visit is an attempt to restore relations with the Makhlouf family, and also to rebuild and strengthen the relationship with the people of al-Qardahah, which has suffered some damage. While the attempt has succeeded in achieving some of its goals, it did not contribute to raising the level of Assad’s popularity among the Alawites.

Other views consider that the entire Makhlouf case is not worthy of Assad’s personal efforts, on the grounds that Makhlouf has always been an employee of the Assad family, and one of the family’s habits is to change employees without providing justifications.

Journalist Bassam al-Youssef, a Syrian Alawite dissident, said that linking Assad’s visit to al-Qardahah to the conflict with Makhlouf is a hypothesis that is not supported by facts, considering, that the Assad-Makhlouf dispute does not necessitate a reconciliation visit.

He believes that if Assad wants a reconciliation with the Makhlouf family, he could have sent a delegate on his behalf.

He added, “Today, after all that happened, the Makhlouf family has become weak and not influential enough for Assad to pay it a reconciliation visit. Generally speaking, there are no Alawite figures today that constitute an obstacle for Assad.”

Youssef added, “Rami Makhlouf is old news, and even his family no longer wants to defend him. All the regime cares about today is money and personal interests rather than the Alawite families issue.”

Assad and Rami’s disagreement had been covered by the media, after the regime requested Makhlouf to pay accumulated taxes on Makhlouf’s investments, including those tied to telecommunications company Syriatel. The dispute ended with the seizure of Rami Makhlouf’s money and the arrest of some of his senior employees.