The suffering of Syria has reached unimaginable limits, with the country physically destroyed, a huge loss of life and a crippled economy writes Asharq Al-Awsat. 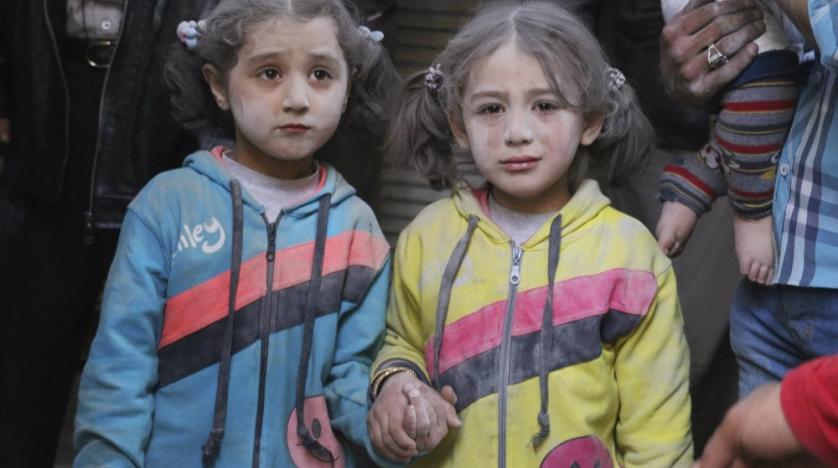 Nine years of war in Syria have left three forms of injustice: retroactive, current and future. Among its manifestations was the spike in economic losses to over half a trillion dollars, destruction of 40 percent of the country’s infrastructure and slide of 86 percent of the population of 20 million in poverty.

New figures have revealed that victims of the conflict have reached 700,000 or double United Nations estimates. These figures are of the injustices of the past. The future injustice lies in the fact that three million Syrian children, inside the country and abroad, are out of schools.

Syria has been described by the United Nations as the greatest humanitarian disaster since World War II, and the data attests to this. It was ranked 180 out of 189 in the human development index and its lies dead last in protecting children. It ranks 174 out of 180 in freedom of the press.

These are some of the findings reached by the Syrian Center for Policy Research (SCPR) in a report, entitled “Justice to Transcend Conflict”, that provides multidimensional analyses of the impact of the armed conflict in Syria between 2011 and 2019, examining the country’s socio-economic situation and institutional performance. The report should serve as a reference to UN agencies and Arab and foreign governments on the conflict.

“The conflict has created three types of injustices: the retroactive injustice, which refers to the destruction and deterioration of the tangible and intangible wealth of the country that have accumulated through centuries; the current injustice, which represents the production of injustice now, as the conflict shifted the integrated and productive economic and social activities towards the destructive one; and future injustice, as the subjugating powers institutionalizing conflict-centered institutions, relations and economy. These powers build the foundations of injustice in the future to be added to grievances that created during the conflict,” said the report.

The conflict had led to the emergence of different, fragmented economies within the “fractured state”, said the report. “The economic foundations were transformed into a self-sustaining cycle of violence in which much of the capital stock was destroyed or reallocated to conflict-related activities.”

Three years ago, Russian officials said the cost of rebuilding Syria may reach 400 billion dollars, while the International Monetary Fund put the figure at 300 billion. Since then, studies on Syria ceased as the international community’s attention to the conflict waned even though the violence did not.

Since Russia’s intervention in the conflict in late 2015, regime forces, with Moscow and Tehran’s backing, managed to recapture vast territories from the opposition. Prior to the intervention it held 10 percent of territory, while now it holds 64 percent. Twenty-six percent lies under Kurdish control, backed by the US-led anti-ISIS coalition, and ten percent is held by Turkey-backed factions.

These various “zones of influence” are somewhat stable, but suffer the same economic problems. The Syrian pound has steadily lost its value against the dollar, starting from 2011. It originally traded at 46 pounds to the dollar and now trades at 1,700 to the dollar. Unemployment has also soared. At the beginning of the conflict, 5.184 million people had jobs, but that number has since dropped to 3.058 million.

Syria’s population rose 0.9 percent in 2018 and 1.1 percent in 2019 to reach 19.584 million people. The conflict has led to the displacement of 5.6 million people to Lebanon, Turkey, Jordan and other countries. As of August 2019, the internally displaced are estimates at 6.14 million, the highest such figure in the world.

The recent military operations in Idlib have led to the displacement of over a million people towards the Turkish border. Northwestern Syria is home to 3 million civilians, have of whom were displaced at least once before from other areas. Over 3.6 million Syrians in Turkey receive protection, but the Syrian refugees in other countries are suffering. Lebanon, host to 500,000 Syrians, had relentlessly called for their return home and it has taken effective measures to stem their flow into its territories.

Syrians inside their own country are also suffering. Poverty reached its peak at 89.4 percent at the end of 2016 and it has since dropped to 86 percent in 2019. The stifling economic crisis in Lebanon has only exacerbated the economic situation in Syria. The coronavirus has only compounded suffering, as has the European Union’s extension of sanctions against the country. The country is in store for even more hardships as the United States moves to implement the Caesar Act in mid-June.

The continuation of the conflict has largely affected the fiscal policies adopted by the government. These policies still prioritize military expenditure and have resulted in the reallocation of available resources from public sector activities and services. The government has aimed to increase its revenue by imposing different fees and taxes, in addition to liberalizing and removing subsidies from some goods, particularly oil derivatives, said the report.

Iran has stated that it spent 20 to 30 billion dollars to back the regime in the past nine years. Russia has called for economic and sovereign compensation for its military contribution.

As the loans have been spent on current expenditure and conflict-related activities, more loans will be needed in the post-conflict era driving higher public debt and perpetuating and exacerbating injustice for future generations, said the report.

The Syrians continue to lose millions of years in education as 2.4 million children between the ages of 5 and 17 are out of school. “Almost half of Syria’s children are not in school, becoming a generation that has missed out enrolled on education which will have far-reaching future consequences. The quality of education has also deteriorated substantially,” it said.

“The continuation of the conflict has led to the creation of separate and isolated regions controlled by different powers that imposed their own vision and objectives on the community. This was reflected in the implementation of different educational curriculums and methods that deepen the state of fragmentation and invest in identity politics. These methods differ according to the dominant actor.”

A UN report said 5,427 children were killed and 3,739 wounded in 2019. Nine hundred of the victims were killed in northwestern Syria. A total of 4,619 have been recruited to fight. UNICEF said 6 million Syrian children have been born since 2011. One million were born in neighboring countries, while 7.5 million need aid, including 5 million inside Syria.

Kidnapping and forced disappearance represent exceptionally tragic consequences of the ways in which war actors have chosen to assert their power and control over Syrian communities, it added.

“The Human Status Index showed the enormous collapse in institutional performance and the deadly struggle between fighting political actors. Throughout the conflict, decision-making processes have been fragmented and internationalized, as multiple internal and external actors engaged in setting contradicting priorities and mechanisms for each of the involved actors,” said the report.

“The different forms of institutions were conflict-centered and adopted extreme strategies to detrimentally affect human beings, social relations, and resources, as well as to subordinate communities.”

“Although the intensity of battles has declined during 2017-2019, the rule of law, participation, accountability aspects of governance continued to deteriorate.

“The organic relations between political actors and new private elite have been deepened and transformed wealth (that which has not been destroyed) to their own benefits in an unprecedented forced redistribution of tangible and intangible capital. Therefore, enormous injustices were created between the political actors and the new private elite on one hand, and the surviving private sector, employees, unemployed, displaced, and poor people, among others.”

The report continued: “The global governance system failed to protect civilians in Syria and to activate humanitarian international law and/or effectively enhance the prospect of a just and sustainable settlement.”

“The application of international law during the Syrian conflict has been negligible, which has impeded the alleviation of civilian suffering and set the grounds for a prolonged conflict,” it warned. “The global power struggle has a direct effect on the intractability of the Syrian conflict. This struggle represented in the approaches of the permanent five members of the Security Council in addressing the Syrian war and the impacts thereof. The struggle is reflected in contradicted priorities and policies including political and military interventions, sanctions, and economic and humanitarian support, with substantial involvement of conflicting regional actors.”

The report suggested alternative approaches to start the transcending process of conflict, based on the political economy analysis of the key active powers and dynamics of the conflict, such as dismantling conflict economy and achieving justice to children.