The Syrian Network for Human Rights has released a report documenting the arbitrary arrests and enforced disappearances that took place during March. 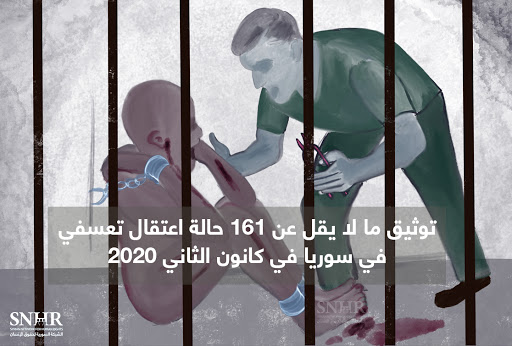 The Syrian Network for Human Rights (SNHR) said it documented at least 156 cases of arbitrary arrests in March 2020, including 97 enforced disappearances.

According to the report, the arrests did not spare women or children.

The Syrian regime arrested 74 individuals including one female, while the Syrian Democratic Forces were responsible for 35 arrests, including two children and one woman.

SNHR revealed the distribution of March’s arbitrary arrests according to governorates with Aleppo seeing the highest rate, followed by Deir ez-Zor, then Damascus countryside.

According to the report, arbitrary arrests were classified as enforced disappearances in several cases where individuals were detained for 20 days and their families were unable to discover where they were being held or obtain information from authorities regarding their detention, or when the fact of their detention is denied by the arresting authority.

Those held by the Syrian regime are subjected to brutal and sadistic torture methods, in addition to being detained under horrible conditions that lack minimum health and safety standards, SNHR reported, noting that this is a widespread strategy used intentionally by the regime to exacerbate the suffering of the detainees.

The regime deliberately subjects detainees to conditions that foster diseases and infections, leaving them to suffer and denying them any medical care, consequently leading to their death, it added.

The lives of almost 130,000 individuals who were detained or forcibly disappeared are at high risk amid the COVID-19 outbreak, in light of the inhuman conditions of the regime detention centers, the report warned citing SNHR database.

According to the report, the monitor used information provided by several sources to make its findings, including its members in Syrian governorates, supportive activists and former detainees.

SNHR also contacts the victims’ families and their relatives to obtain as much information and data as possible, despite exceptional and extremely difficult challenges.

The report called on the United Nations and the guarantor states of the Astana talks to form an impartial special committee to monitor arbitrary arrests and reveal the fate of the 98,000 missing persons in Syria, of whom almost 85 percent are detained by the Syrian regime.

It further stressed the need to pressure all parties to immediately release the records of all detainees, provide a timetable and the whereabouts of the victims and allow human rights groups and the International Committee of Red Cross to reach them directly.