A increase in attacks by Russia and the regime is forcing resident to be constantly moving to keep their families safe reports Enab Baladi. 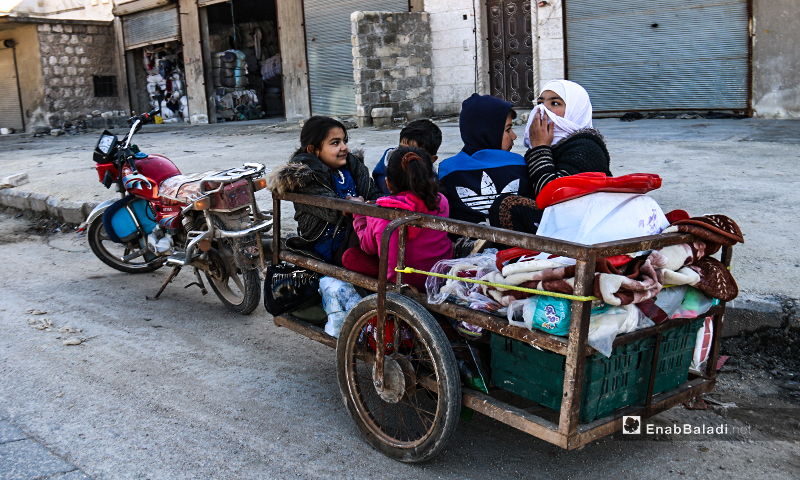 Trucks on the road between the towns and villages of northwestern Syria bear dozens of blankets, bags, personal items and food supplies, their first concern being to know where they are going next in their years-long displacement.

In a small geographic area

Ahmed al-Masri, displaced from the southern Idleb countryside, has been displaced for a second time because of bombardment and military operations, a month and a half after his first displacement.

Masri stopped at the village of Khan al-Subl in the southeastern Idleb countryside and does not know where he will go this time, according to Enab Baladi’s correspondent.

Ahmed, who is 50 years old, has a story that resembles those of hundreds of other Syrians looking for safety. It resembles the story of Ibrahim Mansour, a father of five, who was displaced from Aleppo towards Khan al-Asal in the western Aleppo countryside, and from there to the southern Idleb countryside.

Ahmed al-Masri told Enab Baladi’s correspondent that he was displaced by the severity of the bombardments and missile attacks, and he does not know where he will go next in his long displacement. He also cannot respond to all the questions in his children’s eyes.

The eastern and southern Idleb countryside and western Aleppo countryside have been hit by a major escalation by regime and Russian forces since Dec. 19, 2019, as part of a land campaign that has resulted in them taking control of various villages and positions. The Humanitarian Response Coordinators group has documented the displacement of more than 100,000 civilians, according to a statement on Sunday.

According to the same statistics, more than 90 civilians have been killed during the recent escalation, including 34 children, with 200 more people wounded.

The displaced are generally moving to border areas with Turkey in the northern governorates of Idleb and Aleppo, while some have reached the areas under “Self-Administration” control in northeastern Syria.

On Jan. 23, 2020, the Self-Administration’s Hawar agency said that 25 displaced families had arrived in Manbij, northeast of Aleppo.

The displaced are not only from the targeted governorates and areas. Abu Hamza, a displaced person from Homs, told Enab Baladi that he had been displaced from his town to Khan al-Asal in the Aleppo countryside, and from there to the Electricity Association area, which is two kilometers from Khan al-Asal, before moving again between several areas to escape bombardment, carrying only his clothes.

Putting what he could carry in a pickup truck, Abu Hamza said he did not know where he would go—but it would likely be to Afrin in the northern Aleppo countryside this time, “as a last resort.” He said that dozens of others like him were displaced from the same area by airstrikes.

The story of Abu Hamza al-Homsi is very similar to that of Abd al-Razzaq Rahal, who is from the village of Maarat Shammarin. He has 19 people in his family, including his children, their wives and grandchildren. He was displaced earlier from his village to Khan al-Asal.

Abdul Razzaq said that things had been stable until recently, with only two kilometers between them and regime forces. But he had now been forced to search for a new area to protect him from the severity of military operations, especially given that he believed conditions on the ground will get worse.