The regime delegation of the Constitutional Committee is attempting to dismantle the civil society list, which it sees as an obstacle writes Al-Modon. 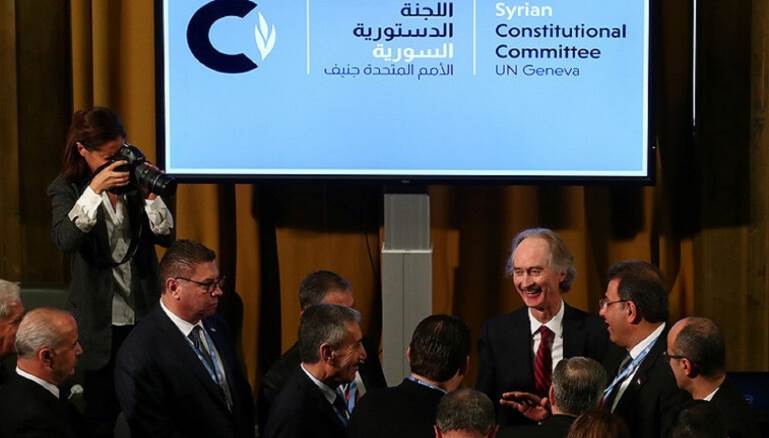 The Syrian regime is trying to get rid of the civil society (opposition) paper in the Constitutional Committee, which opens the doors of hell every day through demands submitted to the United Nations on one hand, and the papers presented to the committee’s members on the other, while Russia expressed its displeasure to the United Nations about the media performance of members affiliated with the opposition figures on the list.

Al-Modon has learned from its sources that the Syrian regime proposed to the UN Special Envoy to Syria, Geir Pedersen, that they cancel the third list (the civil society list) from the Constitutional Committee, claiming that this list was divided between loyalists and opposition, and therefore its members could be merged into the opposition and regime lists. The sources said that the regime will not succeed in its efforts, especially given that the matter is not in Pedersen’s hands, and requires an internal vote (inside the committee) that requires—for it to be passed—the approval of 75 percent of members, that is, the regime needs the approval of the civil society list that it is trying to break up.

According to reports, the regime’s proposal comes as a result of the nightmare the civil society members are making in the regime’s heart, as they primarily deal with humanitarian matters the regime cannot accept because they condemn it and expose it to an earthquake of criticism and shifts in the civic mood which it is trying to achieve through its media behaviors and agenda. These matters include: The issue of prisoners, the issue of bombing civilians and humanitarian facilities, and the issue of opening prisons to the concerned committees, the matter of freedoms, and others.

The civil society delegation registered a major goal in the last session by handing regime delegation head Ahmed al-Kuzbari a “non-paper” calling for “work to be done on the immediate release of all prisoners of conscience by all parties in Syria” and “revealing the fate of all missing and forcibly disappeared and captives by all parties,” as well as “stopping arbitrary arrests and forcible disappearances which are still ongoing in Syria” and “forming a national committee to monitor the periodic release of prisoners according to a time schedule from all parties holding them, and halting the sentences in terms of exceptional sentences, such as field courts and terrorism courts.” This paper was registered in the Constitutional Committee notes against the wishes of the regime, which evaded receiving any paper related to these matters.

The civil society list met with the international envoy on Monday and discussed with him humanitarian issues and the matter of prisoners and the matter of civilian safety and the delegation sending Pedersen a message before the launch of the current committee stressing that the ongoing bombardment and military operations were threatening the entire political process and obstructing the committee’s work, while the delegation also met Pedersen during the last session to stress these issues and to push for an immediate ceasefire.