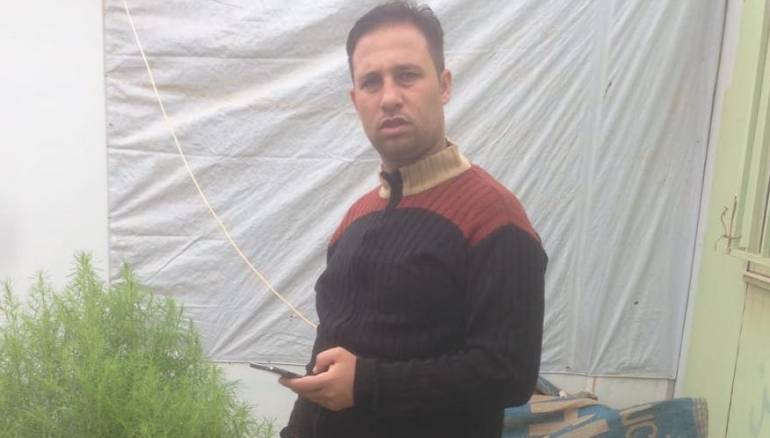 Ibrahim Hussein al-Muheisen, who hails from the northern countryside of Daraa, was arrested in May 2011 in Sayyida Zeinab south of Damascus by the Military Security Division on charges of assisting refugees without informing the authorities. The checkpoint arrested him, blindfolded and handcuffed him, and took him to intelligence branch No. 227, known as Al Mantiqa.

Muheisen told Zaman al-Wasl that the area is divided into two parts: the old prison and the new (where he was placed) comprising two groups numbered G1 and G2 with 3x3m rooms holding around 65-70 detainees, including his brother, who was only 17 and who later died under torture.

Muheisen was severely tortured, underwent “shabh” (hanging), and was placed on the German chair, leading to the breaking of the 4th and 5th vertebrae of his spine and burns all over his body.

In addition to feeding detainees, Muheisen was forced to wrap the bodies. After the doctor confirms the death, a plastic bag with a zipper is brought along with a black pen. Muheisen and other detainees are then asked to write a number dictated to them on the foreheads of the corpse. The same number is later written on the bag.

Muheisen revealed that a Kia 4000 pickup, with license plate number 744544, was used to transport the bodies, when the number reaches 76 corpses, leaving the prison to an unknown destination, adding that the last body he marked with a number was only one day before his release.

Rosemary DiCarlo, the U.N. political chief said last August that more than 100,000 people in Syria have been detained, abducted or gone missing during the eight-year conflict, with the government mainly responsible.

Syria is not a member of the International Criminal Court. The only way the court could prosecute someone from Syria would be through a referral from the United Nations Security Council.