Russia has stepped in to prevent the regime from blocking the formation of the constitutional committee and protect its work reports Brocar Press. 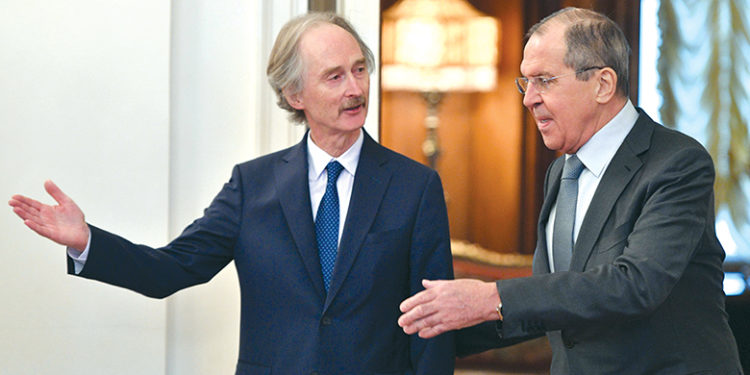 Diplomatic sources told Brocar Press that Russia has once again intervened in order to make a success out of the visit by the UN Special Envoy to Syria, Geir Pedersen, and put an end to the matter of the constitutional committee after the regime tried to impose three conditions that were rejected by Pedersen. In a new step by the regime to derail the committee, sources told Al-Hayat that two members had withdrawn from the UN list after pressure from security agencies on their families in regime-controlled areas.

A diplomatic source said that, “Russia first applied pressure to force the regime to accept the new UN list before the Ankara summit, and has now been forced to intervene again after the regime imposed three conditions in order to receive Pedersen and give final approval for the list to start work by the middle of next month.” The source said that the regime’s three conditions were: First, there be no reference made in the announcement of the constitutional committee’s formation to it being concerned with writing a new constitution; second, not setting a deadline for its work; and third, not making note of Resolution 2254 as a reference for the constitutional committee’s work.

After Pedersen rejected these conditions, the source said that Moscow was contacted in order to put pressure on the regime to comply with prior agreements with Russia, which led to Russia going back to the regime, which led to a formulation of agreements that will be issued during the UN envoy’s meetings with regime officials on Monday.

The source said that, “the final formula for the announcement of the committee will include a confirmation that its reference is Resolution 2254, which includes specific discussion of a new constitution and specifies the time limits for all parties. It makes reference to the 2012 constitution, which the regime approved with a referendum after the revolution broke out, and which canceled Article 8 of the old constitution that had stipulated that the Baath Party was the ruling party in society and the state.”

It is known that the Security Council resolution adopted on Dec. 18, 2015, stipulated in its first article that the Security Council, “expresses its support, in this regard, for a Syrian-led political process that is facilitated by the United Nations and, within a target of six months, establishes credible, inclusive and non-sectarian governance and sets a schedule and process for drafting a new constitution, and further expresses its support for free and fair elections, pursuant to the new constitution, to be held within 18 months and administered under supervision of the United Nations, to the satisfaction of the governance and to the highest international standards of transparency and accountability, with all Syrians, including members of the diaspora, eligible to participate, as set forth in the Nov. 14, 2015, ISSG Statement”

A Russian source told Brocar Press that, “Moscow is concerned with putting an end to the matter of forming the constitutional committee as soon as possible and is putting pressure on the regime not to obstruct Pedersen’s work and to cooperate with him fully.” The source attributed Russian pressure to, “the desire to move on to matter related to reconstruction and the return of refugees in order to stabilize the situation, so that Moscow can invest its military accomplishments on the ground in the political arena.”

A source in the Syrian opposition cast doubt on the regime’s cooperation and told Brocar Press that, “the regime, with Russia behind it, wanted to gain more time and to dilute the constitutional committee’s work and to go into other details such as the committee’s reference, the rules and procedures for voting, and other details that will complicate and obstruct its work.”

Brocar Press obtained confirmed information indicating that two members of the UN’s final list in the constitutional committee had decided to withdraw from the committee after the regime put pressure on their families. A source in the opposition said that, “this behavior is part of the regime’s attempts to obstruct Pedersen in order to confuse his work and obstruct the formation.”