Hospitals in Hassakeh are not disposing of medical waste correctly and medical workers who come into contact with it are falling ill reports Siraj. 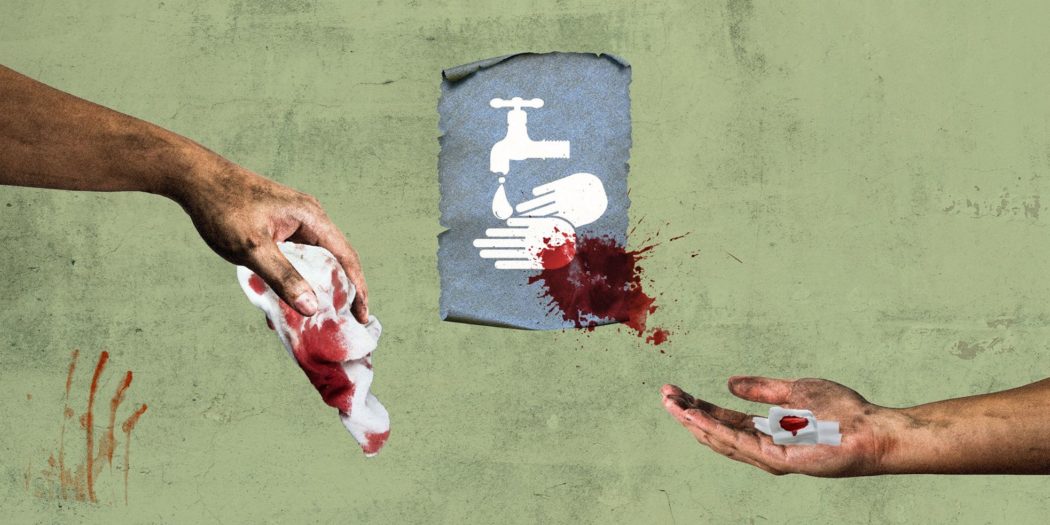 Jihan had worked three days in the al-Hikmeh hospital in Hassakeh city in northeastern Syria, when she suddenly breathed her last breath, to the shock of her family members.

“She got sick and went to the hospital, and then the next day the doctors removed her right foot, which had become infected with gangrene, and then she died,” explained her husband, Yasser Mustafa, a man in his 40s, who could not believe how quickly events occurred.

Her husband tried to save her by moving her to the capital Damascus, but the doctors informed him that “it was too late … there was no hope of saving her life.”

Jihan Mulla Ali, 33, had a job cleaning in the operating theatre at the National Hospital in Hassakeh (a government hospital), to help her husband provide for their six children. She worked for two years cleaning and sterilizing the room and the doctors’ scalpels and collecting detritus from the operations in bags, according to her husband.

The doctor, Adel Sharif, said in his report: “Jihan was affected by an infection that attacked her body’s immune system,” adding that her work and contact with medical waste and operating theatre trash had contributed to her illness.

In addition to Jihan’s situation, this investigation documented five stories of women and men working in hospitals and medical centers in northeast Syria who suffered from chronic and deadly ailments because of unsafe contact with medical waste.

This happened in light of cleaning staff in hospitals not following preventative measures in dealing with medical waste and a lack of monitoring.

The problem has been exacerbated by the lack of hospitals in Hassakeh province following safety procedures stipulated by the “national guide for safe administration of the health oversight in Syria” in dealing with medical waste in terms of gathering, transporting, storing and disposing of it, which has pushed nurses and cleaning staff deal with them as they deal with general waste.

This investigation followed the journey of medical waste from it leaving the operating theatre, to being put into normal plastic bags up to it being thrown into municipality waste bins and then sent to the outskirts of cities and burned in random pits.

A lab technician in Qamishli, Younes Abu Zeid, said: “In the public and private hospitals there is no caution given to the spread of some diseases.” He added that, “cleaners in the hospitals are the most exposed to diseases because they are less aware than doctors of precautionary measures.”

The World Health Organization (WHO) defines medical waste as “the secondary products of medical care including sharp and non-sharp objects polluted with blood, body parts, tissues, chemical materials, and pharmaceuticals and radioactive materials.”

The WHO says that poor management of healthcare can lead to care workers, patients, their families and communities being subject to infection, toxic materials and preventable injuries.

Abou Zeid said that, “Throwing sharp medical waste like needles, scalpels, venous catheters and laboratory glass in waste bins without following security precautions could cause injury and spread diseases.” He stressed the need for there to be an incinerators at each hospital.

Medical administration in the Syrian al-Jazeera area—which includes Raqqa, Hassakeh and Deir ez-Zor provinces east of the Euphrates—is split between the Syrian government, represented by the Health Ministry, and the Self-Administration, in an extension of the division of most authority there.

The joint president of the Health Committee in the Self-Administration in Qamishli, Dr. Abeer Hassaf, acknowledges that there is a major problem because of the lack of medical incinerators. She says: “The one incinerator is in Dreik/al-Malakiyeh, and was set up in 2018 with the help of an international organization. It’s enough for this hospital and all the medical centers around it.” She said that it cost 23,000 US dollars—about 14 million Syrian pounds.

Hassaf said there were no incinerators because the hospitals were set up before the Self-Administration was set up, meaning that the Health Commission was not at fault for them not having medical incinerators. But the field visits carried out by the investigative journalist showed that the Eye and Heart Hospital affiliated with the Health Committee, opened this year in Qamishli, did not have an incinerator for medical waste.

In February 2019, the investigator tracked a garbage truck in the western municipality after going out to collect trash in Qamishli, after reports that it was dumping medical waste along with general waste.

A cleaner in the National Hospital in Hassakeh informed us that medical waste including blood bags, syringes, body parts, contaminated medical gauze and scalpels used in surgery were being collected in bins in the hospital hallways, and then these contents were emptied into a trash container and then put into municipal garbage trucks without gloves. Then cleaners mixed it with general waste in trash trucks and it was later thrown out and burned.

The vehicle ended up in the Nafkeri landfill near Qamishli after passing by several hospitals and medical centers to collect medical waste. It was piled up at the landfill and then occasionally burned. The investigator witnessed a variety of medical waste at the landfill, even after the burning, such as catheters, serums, medical bottles and other items.

The negative effects of burning medical waste at landfills is not limited to spreading disease among workers, but also affects the environment through the emissions created by the unsafe burning.

A member of the board of trustees for the local Keskayi organization for environmental protection, Delbrin Mohamed, said: “Medical waste being mixed with general waste leads to a change in the composition of this waste, changing it from normal materials to toxic materials and making it a danger to humans and the environment.”