Soldiers fighting in the regime's forces have stepped up calls for them to be discharged, citing exhaustion and the fact that they have completed their required service writes Al-Modon. 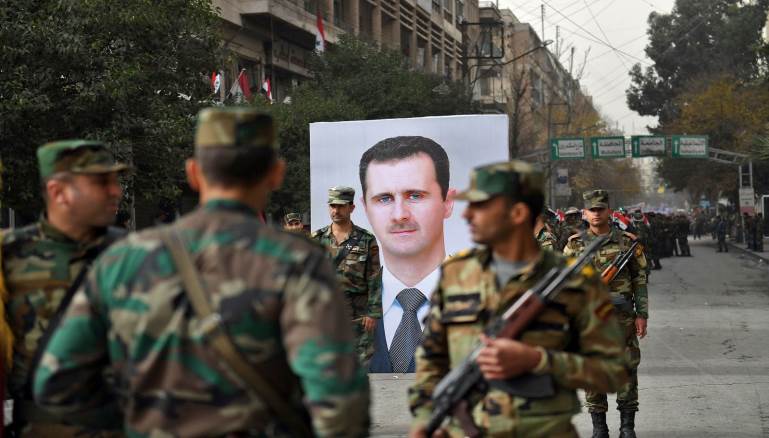 Two years after it was first launched, the hashtag #بدنا_نتسرح (we want to be discharged) has returned to forefront of social media pages in Syria, with soldiers in the Syrian regime army using it to call for their discharge from military service. It has become ubiquitous, exactly like the abhorrent regime’s slogans: “Assad forever.”

The campaign was launched in 2017 to call for the discharge of soldiers from the Classes of 102, 103, and 104—that is from 2010, as well as reserve soldiers who had been taken into service since 2012. While members of Class 102 had been discharged last year, many regime soldiers still suffer from long military services that had been supposed to end after just two years.

One soldier wrote on Facebook: “We want to be discharged. I have four children, and I’m exhausted. We’re all exhausted when we think of our children and our situation, so exhausted.” Another asked: “The regime discharged my class of officers, and more than one soldier, and then stopped the discharges. It could be that was a trick to make people think that the discharges were ongoing, and then would sign up. The question has been in my head for the last week—is the reason for the lack of discharges the fighting in Idleb?”

One posted a picture of a skeleton lying on a sofa with the writing: “Me waiting for my discharge cable #دورة 104 صف ضباط (officers class 104).”

Pages on Facebook like “Call for the dismissal of batches 104 and 106 and the 2012 reserves” are still active, devoting their time to calling for the discharge of soldiers in the regime army. But the reasons for that are radically different than the last two years. At the time, the Russian and Iranian military intervention had been the reasons for the reduction in the compulsory conscription restrictions imposed by the regime in areas under its control. But the reasons today are limited to the end of the war and the regime taking control over large parts of the country—which requires relaxing the militarization of the country, including conscription.

The regime is keeping soldiers in its ranks in compulsory and military service, some of whom have been in service for eight years. But comments indicate there is discrimination in the implementation of laws and decisions, in addition to nepotism and corruption in the regime army, whereby the compulsory conscription laws are implemented strictly against poor people and normal families and not on rich families or children of officials. One, for example, wrote: “Why have they discharged people born before 1981. Is it to protect the children of officials wanted for reserve service? Answer us for God’s sake–we were born in 1983, why hasn’t there been a decision to discharge us?”

A few days ago, loyalist media published an image of a regime soldier calling on his president to discharge the soldiers who have spent years in service. Participants in the campaign have meanwhile called for a clear and public decision with regards to the manner and length of reserve service and the retention period, especially given that there are thousands of them still in service who have been there for more than eight years.

It should be said that what is most surprising about this type of campaign is that those running it are looking to obtain justice from the Syrian regime, despite it being an entity that has carried out the same practices not just over the last nine years, but since the 1970s. But the expression of discontent is still notable, even if it doesn’t reach the point of rebellion.

After that, other classes were discharged after an administrative order was issued to discharge classes of reserve and compulsory soldiers that had completed five years. This began with Classes 248 and 249, and the officers before them, as well as stopping reserve calls for officers who had joined in 2013, who had completed five years in the reserve services up to the same date. But the administrative order was accompanied by intensifying reserve call-ups among various groups of young men through bulletins circulated at the conscription departments and border centers.

The fact is that through these superficial decisions the regime tried to create the the illusion that the state of war had ended after Damascus and its countryside were declared “free of terrorists” last year, even as the country headed toward a sort of frozen conflict. It was trying to reduce the pressure and discontent in loyalist ranks, especially after the repeated Israeli raids on Syrian territory, with the war turning into a direct confrontation between forces active on the ground—specifically Iran and Israel.