An uneasy relationship between the residents and the regime has lead to a failure to adhere to basic building regulations, leaving many buildings dangerously unsafe reports Baladi News. 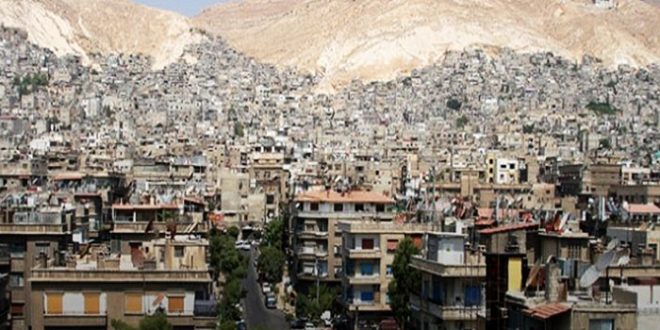 A few days ago, the pro-regime Tishreen newspaper issued warnings about cracks in a building in the Mezzeh 86th district of Damascus, which is mostly pro-Assad, while the Damascus governorate takes a position of neglect, as the district has has a rebellious attitude since it was founded!

The newspaper quoted a member of the executive office in the Damascus governorate as saying that, “there is a project to support this building and to sign a contract and carry out a tender to repair it, but there is currently no danger for residents in the building.”

The 86th district is one of the main district for unregulated violations due to the alliance of regime forces and intelligence with corruption, and has seen a number of buildings collapse in the past.

The district, which is named so because of the Military Brigade No. 86 that are headquartered in the same area and is part of the Defense Brigades, has witnessed conflicts because of its loyalty to Rifaat al-Assad, who tried to stage a coup against his brother in the 80s.

Historically, the 86th district’s buildings have been built in an unregulated manner, with approval given by Rifaat al-Assad, brother of Hafez al-Assad, and commander of what was known at the time as the infamous “Defense Brigades.”

Before the revolutionary mobilization, the governorate had been able to bring in building materials as they pleased, which were used for buildings that violated a number of codes.

With the beginning of the uprising against the regime, a blind eye was turned to this area, according to witnesses who asked not to be named.

The district’s return as a center of building violations has recently led to an increase in the number of buildings collapsing, according to loyalist media reports. These reports attribute this to two reasons, the first being connected to the unregulated building trade, and the second resulting from cracks and the poor quality of stone.

This area is distinguished for being not just a center for building violations, but also diseases and illnesses, according to loyalist sites and media, quoting residents of the area who complained about the accumulation of trash and the rough roads, as well as the sanitary neglect. Fires have broken out as a result of the electricity problems because electricity is illegally supplied.

Many people from Damascus including loyalists see the district as having a special status and near-independence from the authorities.

Many factors reinforce this view, which the rights activist Mulham al-Sharani discussed, saying, “Everything is explicit in the 86th district. Before the revolution, electricity and water bills were not paid to the regime and this is simply because they were supplied illegally, with no meters.”

He added: “Electricity or water bills go to loyalist areas or those near the district, and everyone knows this.”

With the start of the revolution, the district returned to prominence for the sacrifices of its residents and loyalty to Assad, and so a blind eye was turned to their practices, and the district became “above the law,” according to Sharani.

The loyalist Al-Watan newspaper reported in February of the danger facing the district because of caverns of unknown size under buildings.

According to Al-Watan, the Damascus governorate had assigned the geological division to make a study of the ground in this area, but this study hasn’t been completed. Most sewage water is still leaking under buildings and penetrating the earth, which is a reason for the caverns increasing, and it warned of the danger of the collapse of buildings that haven’t followed the lowest safety standards.

There has previously been mistrust between district residents and the regime despite their loyalty to Assad, but the relationship has become controversial according to Baraa al-Shami, who said that the governorate did not dare enter the district without obtaining prior permission from the security agencies whose checkpoints are deployed on the “Building 14” and “Falafel Ala Keifak” sides.