Alawites living on the Syrian coast are watching the unfolding events in Hama and Idleb and are concerned about what the developments might mean for them writes Al-Modon. 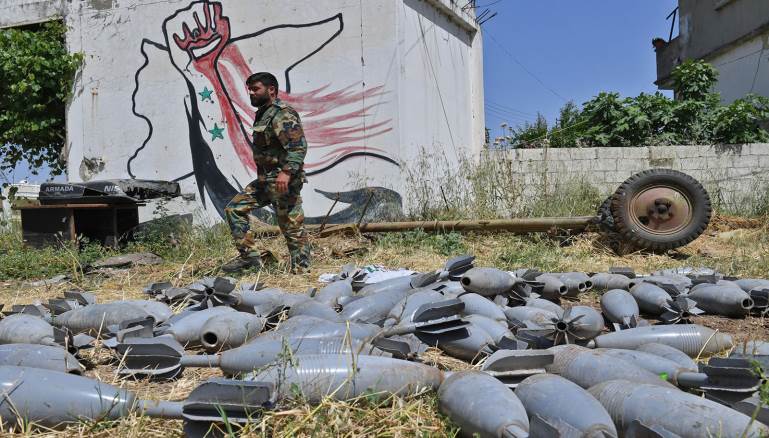 Alawites are watching the current battle in the Hama and Idleb countryside with a great deal of interest. Their children are fighting on the fronts against the opposition. The Russian warplanes in the skies over Idleb and Hama are launching from Hemeimeem—and the opposition are responding with bombardments using grad rockets and drones.

It is the “most important battle” says Ahmed, a young man from Lattakia. “Idleb is still a source of concern for this area.” The residents of the Syrian coast have not forgotten when Jaish al-Fatah (Army of Conquest) advanced and took control of Idleb in March 2015 and then some of its commanders announced that the next goal was Lattakia. “This spread fear among us—especially with the major retreat of the army and the apparent strength of the militants,” continues Ahmed. He adds: “I know that the fear was major. But this fear has pushed many to decide that fighting is the only option. At that time, everyone was following the militant commanders and sheikhs on the internet. Their rhetoric was sectarian and worrying, and therefore they contributed to mobilizing the coast, men and women, to repel them.”

Riyad, from Tartous, agrees, adding: “The army now being victorious in what remains of the Hama countryside and in Idleb and bringing these areas under state control will have positive effects.” Idleb is one of the biggest remaining fronts outside the control of the Assad regime. If it is able to win there, it will remove one of its biggest obstacles. And therefore, “this area remaining in the hands of militants means that the state areas will remain cut off. The most important roads toward the north and its capital Aleppo run through Idleb. Putting an end to this front will have a positive impact on all levels—especially economically,” according to Riyad, who continued to say: “Finally, it will provide the areas adjacent to Idleb with security, and therefore will reduce the drain on the army, which is deployed in these areas to protect them. This is positive in general because it means that the state has regained its control over new parts of Syria.”

Samir, a young man from the coast who supports the revolution and has experienced a lot of trouble because of that, confirmed what had been stated about the fears of Alawites when the Jaish al-Fatah approached their areas: “I noticed this. Their advance was swift, and so everyone prepared for fighting. For me, I was (and still am) in support of the downfall of the regime, but I was not at all with Jaish al-Fatah coming into Lattakia.”

With regards to the fighting currently ongoing in Idleb, many people on the coast are following intensively, “because Idleb and Hama are close to the coast or because their children are fighting there.” But at the same time, there are many who are indifferent, because people are preoccupied with earning a living more than with anything else. Samir continues: “Many people are exhausted and really uninterested in anything but their situation and their families. For me, everything happening is a nightmare—sad and scary for people in Idleb and everywhere. The problem is that I don’t see any future for anything.”

Riyad was not hesitant to say: “Yes, in Idleb there will certainly be casualties. This is a war. And especially among women and children. I don’t want that. But I know that this will happen. The problem is that there is no other alternative to this battle. It will happen now or later because the situation and the truces cannot continue without end.” For him, “The state will try sooner or later to regain control over the areas in their enemies’ hands.” In contrast, he adds: “If rebel forces were the ones advancing on our areas, for example, wouldn’t there also be casualties among women and children? Isn’t this what happened when they attacked the northern countryside in Lattakia? I don’t say this to make justification. I hope that it will not happen and that there will be a solution to keep children and women and non-fighters neutral.”

Hassan, a university student, was asked by Al-Modon about what was being said about people on the coast calling for the extermination of Idleb’s people, if necessary. He said: “Yes, this opinion exists … but with whom? You find it for example with some of those who have combined sectarianism with ignorance and arrogance, or some people who have been affected by the disasters of this war, such as losing loved ones. I can tell you that this view is rejected by many people here, and that the people who are saying it are rejected as well.”