As the regime continues its assault on Idleb, questions are being asked about what happens next and how Turkey and the US will come into play writes the Omran Center for Strategic Studies. 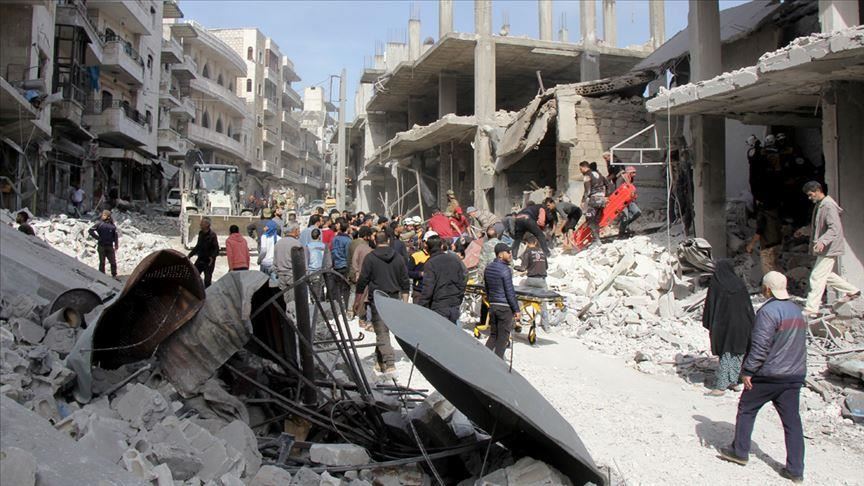 The Russian-Syrian escalation in Idleb comes amid hesitant American-European condemnation and a notable silence from the Turkish guarantor—the relevant party to the Sochi agreement. Coinciding with the Russian escalation, Turkey and its allied factions have begun military actions, which appear to be limited to the northern Aleppo countryside against the Kurdish People’s Protection Units (YPG), which suggests that there have been agreements about what is occurring—or what some consider to be a “barter deal” between Moscow and Ankara.

No one can predict what the situation on the ground will lead to in the fourth “de-escalation” zone, or the precise extent of the incursion that Moscow wants into this region. But through what has been put forward, one can reach the following conclusions, which may draw an approximate picture of the likely events:

1. The military campaign being carried out by Russia and the regime is considered the last stop of the Astana track, which has achieved Moscow’s military aims and failed to achieve any political results in terms of a solution, as a result of the divisions between the three parties overseeing the track (Russia, Turkey and Iran), and the UN obstacle represented by the reactivation of the Geneva track.

2. Progress in Ankara’s talks with Washington with regards to the buffer zone have apparently changed Ankara’s priorities, represented by their coordination with Moscow in clearing the YPG pocket in the northern Aleppo countryside and leaving the implementation of the items of the suspended Sochi agreement to Russia.

3. The withdrawal of the National Army forces backed by Turkey from three villages they controlled in the northern Aleppo countryside, along with the failure of the regime forces to advance during the first day of the campaign in the Hama countryside indicates that Turkey obtaining any new territory in the northern Aleppo countryside is subject to regime forces taking territory inside the demilitarized zone at a depth specified by the two parties.

4. It appears that in the statements and positions of the rebel groups operating in the demilitarized zone and the battles which they are still fighting against the regime forces and their allies, that they are not party to Ankara’s agreements with Moscow. Hay’at Tahrir al-Sham’s position is still ambiguous, and it is the force with greatest control in the area and the most flexible position regarding the entry of Russian patrols into the buffer zone, as it has not rejected Russia patrols entirely, but it has made it a condition that it accompany them, along with a number of other conditions.

5. The conditions surrounding the political battles (Ankara and Moscow’s agreements) and military battles (the regime’s insistence on land incursions) indicates that the operation is not just to put pressure to allow Russian patrols and open international roads and secure Russian military bases in the area. Rather, the aim is to eliminate the rebel groups who rejected the Russian patrols by gnawing at their territory and incurring to a depth which, according to experts, could reach up to 25km to secure international roads. They would then stop at this point, which would achieve Moscow its aim of securing the Hama and Lattakia countryside, including Russian military bases and airports, and opening and securing international commercial routes. Moscow has seized plains in Idleb and surrounded Tahrir al-Sham and other groups in a narrow mountainous pocket with a high civilian density.

Finally: The fourth de-escalation zone is today paying the price that other areas did for the accumulation of political and military errors, primarily the error of getting involved in the Astana track, which gave the regime a chance to catch its breath and to gather its strength and isolate the de-escalation zones one after the other. Today—even with the signs of the end of this path as a result of the divisions of those responsible for it—the regime and Russia are still benefiting from these divisions, which have secured and continue to secure it a number of margins to move between. The regime today is still living off of the divisions between the forces involved in Syria and their conflicting interests.