With daily airstrikes, large gatherings of people have become too great a risk, forcing traders to travel around to sell their products writes Ana Insan. 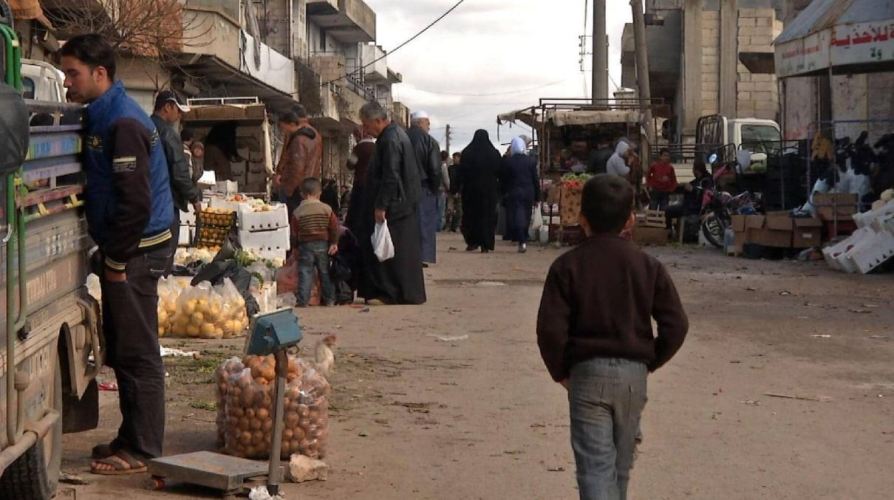 With the Syrian regime and its Russian ally striking markets and areas where people gather in parts of Idleb and its countryside, and many casaulties resulting from this bombardment, many lifestyles have been impeded in these areas, which has made it harder for people to obtain their daily needs at reasonable prices. But from the heart of this hell, a large number of roaming sellers have emerged who have decided to carry their goods to people wherever they are found, whether in homes or in the camps.

Mahmoud al-Saleh, 45, goes out in his car every morning from Maarat al-Nouman, accompanied by his eldest son, to head to the public market to buy clothes of all sorts and fill up the truck of the car with goods for his customers. Then he tours the city’s districts and their streets and in many districts he goes out to the countryside and the villages near his city, trying to earn a living. Saleh told Ana Insaan: “I used to sell clothes on a stall in the markets. After the bombing increased and the markets were targeted, I decided to move between villages and towns to sell my goods.”

Ibrahim Mishaan, 39, a displaced person from Idleb’s eastern countryside, who is now living in a camp in the town of Maarshamseh, decided to sell bread on a motorcycle. He goes out every day, “at the break of dawn to the bakery to get bread. Then I tour the neighborhoods and streets and camps to sell it. I usually sell everything I have because of the increasing demand among residents. I can earn a living to feed my children, which has become very hard these days.”

The work is not limited to adults, but young people also have a large role in supporting their families. Hisham al-Shaaban, 13, from Kafar Roma, after returning from school each day carries a bag full of various types of cleaning products and tours the streets between houses and alleys to sell some of them, helping his father meet household expenses in light of the severe inflation.

Mohamed al-Hussein, 46, is a wholesale food trader in Idleb. He told Ana Insaan that most of his customers are owners of mobile markets because buying and selling inside the markets has become very weak and that most of the traders have complained of declining sales and that the mobile markets offer some of them opportunities to sell their goods, such as bread and vegetables and fruits and even clothes and cleaning products.

The difficulties of this profession, which hundreds have begun to practice, are not limited to the low return on their sales. It has become one of the most dangerous jobs in opposition areas, which have not been spared bombardment, security breakdowns, and repeated explosions, as these people stand in squares and markets, which are always in danger of bombardment, as if they are hurrying towards death to ensure a living for their children. Most traveling salespeople are children or the elderly who were forced by low work opportunities or the absence of a breadwinner to practice this trade, which does not need much capital, but only a car or a three or four-wheel cart.