The fuel crisis in Syria, could be used as an opportunity to push the regime to accept a political solution and potentially could lead to a change at the top of the regime writes Iqtissad. 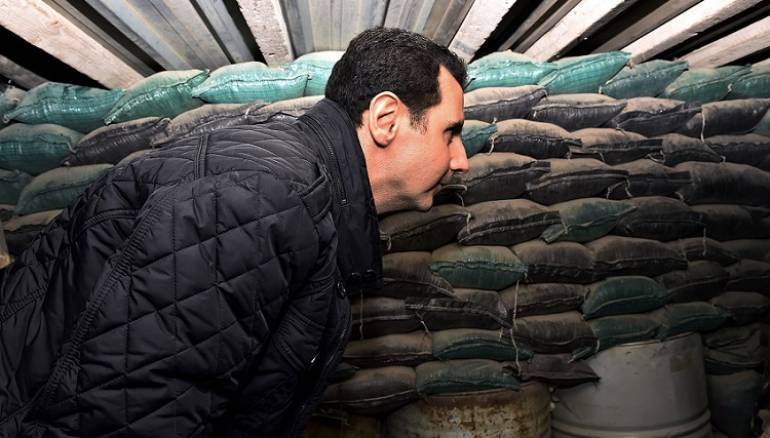 The shortage of gasoline and the almost total inability to provide solutions, has put the Assad regime under increasing pressure at a time when there is talk of an international and regional desire for a political solution in accordance with the Security Council’s resolutions.

Analysts argue that the economic crises plaguing the regime will push it to compromise in order to reach a political solution.

For more than a week, the regime has suffered from a severe fuel crisis that has immobilized transportation in all regions, particularly in the major cities of Damascus and Aleppo.

The head of the Syrian Economic Task Force, Osama Kadi, said in an exclusive interview with Iqtissad that, “the suffocating embargo on the Assad regime is designed to embarrass Iran and force the regime to abandon such a weak ally, which will not be able to deliver oil for its ally.”

In his analysis, Kadi asserts that the embargo is approved by Russia, in order to deliver a clear message to Iran that Russia is the only strong ally and the one in command in Syria, and that the embarrassment of the regime, in front its loyalists, is preparation for the replacement of the head of the regime by Russia.

“Russia is using US sanctions as a means of getting rid of the head of the regime and its ally Iran. Russia is trying to gain popularity in Syria, as well as gaining international recognition for its role in fighting Iran as a state sponsor of terrorism,” he said.

Kadi added that this time, America is serious about tightening the boycott against the regime and Iran, not to overthrow the regime, but to push for a political solution, especially if the Caesar Act is ratified (a civilian protection act drafted in 2016). He stresses that: “the Syrian crisis is very complex, and the political solution ensures a balance between the interests of Russia and America, specifically their relations with Israel, Turkey, Egypt and the Gulf.”

He expressed his belief that the American administration wants an additional gain, namely, the elimination of the Iranian influence and expansion in Syria and perhaps in Iraq as well, and appearing as the victor who brought the Syrian issue to political safety, albeit without fulfilling popular demands.

Economist Yunus al-Karim described the crisis in the system as a “complex crisis” and that to understand the impact of the oil crisis on the behavior of the regime it must be analyzed.

He pointed out, in an exclusive statement to Iqtissad, that there is a role played by the regime in the crisis, where it paves the way to raise government subsidies on fuel prices and sell it at international prices, in order to attract multinational companies, which are considered the main player in international policies.

He explained that state subsidies makes it hard for multinational companies to enter the local market, as it will make it more difficult to compete and will make the expected profits weaker; as well as an increase in the taxes imposed by the State because of its support for certain basic goods and materials, ie, increased State responsibility.

The second reason for the crisis, according to Karim, is political, resulting from the international demands from the regime in order to proceed with the political solution.

He said that, “the goal of the economic siege on the regime is to pressure it to implement the full procedures required to advance the political solution, specifically the formation of the constitutional committee, because that would reorganize the opposition.”

Karim continues that, “As a result of the oppressive policies of the regime, no Syrian opposition has been capable of performing the internationally demanded role. The withdrawal of the head of the regime or his absence, before arranging for what comes next, may drive the country towards a greater conflict.”

However, the dissented financial analyst, Munther Mohammed, ruled out the regime taking real steps towards a political solution, saying that, “despite the financial and economic crises shaking the regime, Assad still thinks that he is the only victor in the war.”

He added to Iqtissad that the regime mostly suffers from shortages in liquidity at its Central Bank, and its inability to pay the price of the oil that was imported from Iran, who stopped the supply of oil to demand the implementation of signed contracts with it, starting with receiving the port of Lattakia.