Despite some reports of progress, talks about the nature of a "security zone" in northeastern Syria are still ongoing reports Al-Quds Al-Araby. 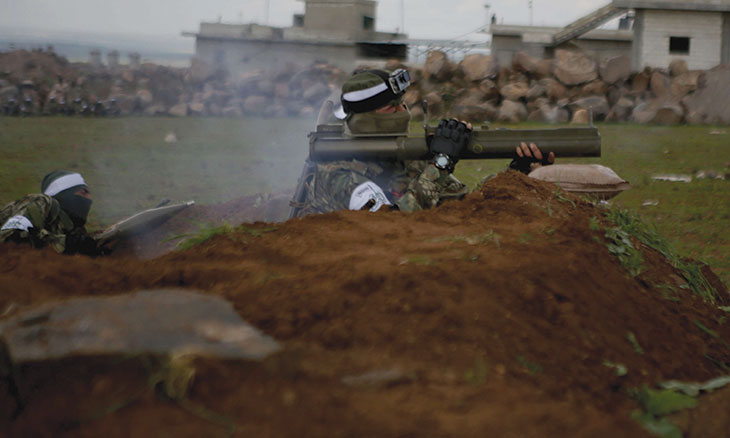 Discussions have advanced on the political and military levels between Turkey and America with regards to the Syrian-Turkish border zone between the east bank of the Euphrates, near Jarablus, up to the Syrian-Iraqi-Turkish triangle in the most northeastern point of Syria.

Al-Quds Al-Araby has learned from sources that negotiations between the two sides have not yet reached a deal with regards to the “security zone,” despite what has been rumored. The sources added that the area is not defined by a specific depth, and is not in accordance with the Adana agreement. Washington has agreed to leave the depth of the “security zone” according to “evaluation of the security risk for Turkey.” The first discussion exempted the city of Qamishli because of its proximity to the border and the Syrian regime’s control there.

The source said that Ankara had previously called for the M4 Road (Aleppo-Hassakeh) between Manbij and Ayn Eissa, passing through Sarrin, to be included in the “security zone” but that this proposal was rejected by the American team.

The source denied that a deal had been reached for the deployment of Turkish or opposition Syrian forces close to Ankara in the Euphrates Shield area, describing this as a matter “not subject to investigation” because of opposition from the Syrian Democratic Forces (SDF), led by the Kurdish People’s Protection Units (YPG).

The source noted that ideas have not yet crystallized around the nature of the “local forces” that will be deployed in this area, and said that the YPG was viewing that issue as a matter of its fighters in the Asayish who are from these areas, and they will be the ones to take responsibility for imposing security and pursuing Islamic State cells in cooperation with the command of the International Coalition.

The source closed by saying that the discussions had not addressed the opening of the closed crossings between Turkey and Syria, which are the Qamishli-Nusaybin or the Tel Abyad-Akcakale, or the Ayn al-Arab/Kobani-Mursitpinar crossings.

The source said: “There has been no discussion of the nature of governance or the form of city administration there, and it isn’t known if America will agree to the formation of local councils separate from the Self-Administration and under the authority of the Interim Government or National Coalition.” However, the source predicted that, “America will not agree to this and will limit their agreement to reducing and considering Turkey’s security preoccupations related to the presence of the Kurdistan Workers’ Party on the southern borders.”

From another perspective, the Kurdish Center for Studies, based in Berlin, published an extensive policy paper by the former political political adviser to the Self-Administration, Nasser Hajj Mansour, in which it reviewed the current situation east of the Euphrates and welcomed the initiative carried out by the American envoy James Jeffrey, but at the same time stressed eight points, which he described as red lines which can’t be “interpreted or touched,” which were:

What Al-Quds Al-Araby has quoted from a source close to the talks and regarding the initial agreements between Turkey and America accords with the YPG’s “red lines” as put by their former adviser.

It is clear that there is a desire by the Democratic Union Party and its military wing to move forward with the American desires in reassuring Ankara, especially after the American decision to stay, which pushed it to close the channels of dialogue it had opened with the Syrian regime The Self-Administration knows that it needs more flexibility in confronting the “post-ISIS” situation, which requires absorbing Arab tribal communities, movements and local actors in the region’s administration and not making them just a front for their control.

Ankara understands that it is impossible to launch a military campaign east of the Euphrates because of the American protection there. This is why it is likely to be involved in political negotiations and achieve possible gains there, most importantly keeping away the YPG from its borders. This has become clear in the American agreement to call the area as the Turks wanted, a “security zone” and not a “safe” zone in a major consideration for its NATO ally’s preoccupations.