Despite having to flee her home country and facing continued hardship, Shaza al-Manla has thrived as a musician and continues to excite audiences writes Zaman Al Wasl. 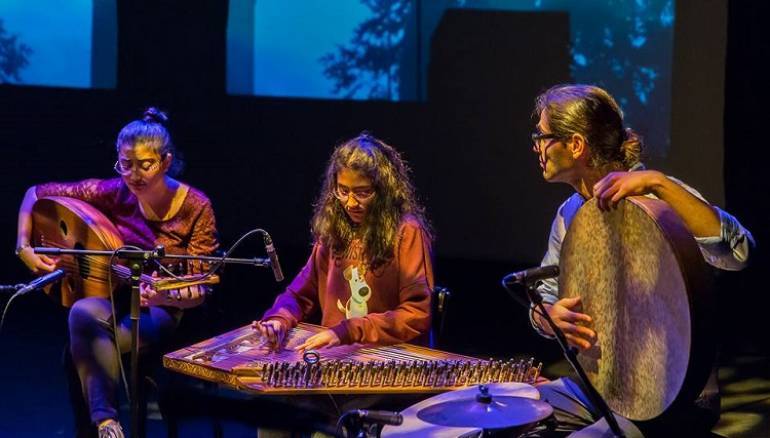 Research has shown the importance of exposing young children to music and how early exposure can increase a child’s musical sensibilities.

A child’s first experience, the way that they hear music and the way that they move their body to music will help them create an active relationship with music, which can encourage them to play instruments, perform and experiment.

Shaza al-Manla, a young girl from Syria, was one year-old when she discovered the sound of the Kanoun in her parents’ house and was more interested in that than the games usually played by children of her age.

The musical sensation grew inside her, before she stood on her feet. By the age of seven she had mastered playing the Kanoun.

He father, a professor at the Higher Institute of Dramatic Arts in Damascus, told Zaman al-Wasl that his daughter’s relationship with music began at the age of seven. She enrolled at the Salhi al-Wadi Institute in Damascus. She chose the Kanoun and had one lesson a week.

She also enrolled in a music institute in Jaramana, where she continued to study Solfege and a special teacher was brought in to continue her lessons on the Kanoun.

In 2012, when Shaza was eight years old, her and her family left Syria for Egypt. In Cairo, she was registered at the Egyptian Opera House – Talent Development Center. She continued her studies with one of the most prominent law professors, Dr. Saber Abdul Sattar.

According to her father, she also recorded at the “House of Oud” and continued to attend Solfege classes with Dr. Ahmed Youssef, a professor of Solfege at the Academy of Arts in Cairo. This intensive study lasted for two years.

She then began lessons with Ahmed Saad, a Kanoun professor, who taught her pieces of music by Goksel and other Turkish musicians.

Her father explained how she established an oriental band called “Qassion” in relation to the famous mountain overlooking the Syrian capital Damascus.

She participated in many concerts at the “House of Oud”, which is run by the famous Iraqi artist “Nasir Shamma”.

Due to the difficult asylum conditions in Egypt, this gifted young girl and her family were forced to move to the Netherlands at the end of 2015. She was immediately discovered as a musician with her sister Joey, where the two sisters continued to play in the group they founded in Egypt.

In the Netherlands, Shaza played in a wide range of concerts, travelling with her sister to many Dutch regions, and in 2017 participated in a music competition for children and young people under the age of 18, and which is hosted by the Nederlands Blazers Ensemble.

Shaza and two other won the competition at the Opera House in Amsterdam.

The two sisters were selected from a large group to play with the Nederlands Blazers Ensemble and participated in the 2016 New Year celebration, broadcast on Dutch television.

They also presented dozens of concerts across the Netherlands with Mudar Salama, who joined the band as a third member.