The prospect of the return of the United Nations Office for the Coordination of Humanitarian Affairs has raised many questions about the relationship between the regime and the UN and how aid will be used writes Al-Modon. 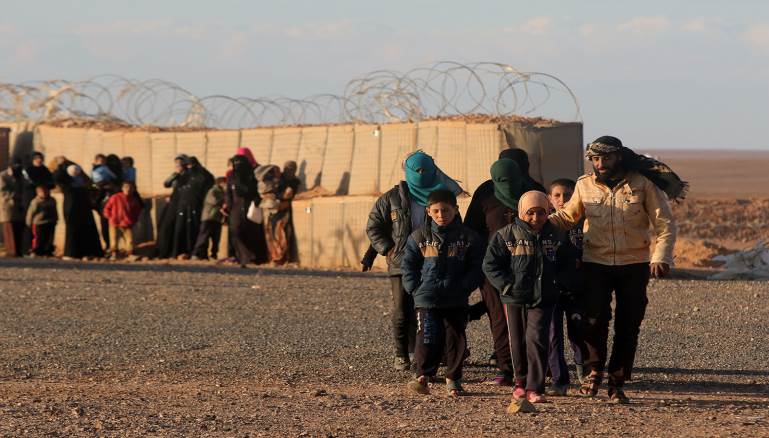 Some United Nations offices concerned with Syria have started taking new steps regarding their relations and work with the Syrian regime, in what may be an acknowledgment of the reality that Russian-backed regime militias have imposed control over large swathes of the country’s south and center. Although there has been no official announcement of these measures so far, available information has recently confirmed that the regional United Nations Office for the Coordination of Humanitarian Affairs (OCHA) headquartered in Jordan has started procedures to return to Damascus.

OCHA is the most active and circulated name in areas controlled by regime militias in Syria, given that it is concerned only with coordinating humanitarian and aid work. The main center for this work is in Jordan, with additional offices in Turkey and Lebanon. It also has an office with limited influence and powers in Damascus, which is constantly restricted by “transit permissions” issued by the regime to aid convoys, and which OCHA employees cannot move without. In contrast, the regime forbids the presence of offices concerned with documentation work, monitoring the human rights situation, and preparing reports for the United Nations in the areas it controls. These offices have had the visas of their employees withdrawn and have been banned from Damascus, in addition to the continuous official and media harassment of their rights reports.

After regime militias took control of southern Syria, which had been a major focus of OCHA’s work with dozens of humanitarian groups receiving aid there through the Syrian-Jordanian border, aid work declined heavily, and the humanitarian aid coming from Jordan became limited to a few convoys entering through the Nasib border crossing, with aid groups distributing them under regime observation.

However the biggest development in OCHA’s work in recent months has been it turning its focus toward the al-Rukban camp on the Syrian-Jordanian border inside the 55-km zone under American protection in the al-Tanf military base. Al-Modon’s sources said that OCHA had overseen February’s aid operation carried out by the Syrian Red Crescent in the camp with 15 employees accompanying hundreds of Red Crescent members to offer aid over about two weeks in the camp.

The success of this operation, despite it being limited, paved the way for a larger role for OCHA to enter by way of monitoring the negotiations that were held at the end of March between representatives and notables from the al-Rukban camp and Russian officers and regime officials with the aim of reaching an agreement to “dismantle” the camp and return the refugees inside them to their cities and towns under the control of regime militias. These meetings were attended by OCHA office officials, headed by Samir al-Hawari, the deputy director of the office in Syria, who signed the meeting minutes as a representative of the United Nations there.

The result of the meetings saw light in April with the start of an operation to clear hundreds of displaced people in the camp, who numbered more than 1,500 at the end of the first week of the month, all transported by way of Russian military police to shelter centers in the Deir Baalba district in Homs city, despite a prior agreement that they would be returned to their cities and towns in the eastern Homs countryside. Meanwhile, it was not announced what the fate was of those who refused to return to regime authority—especially young men wanted by security agencies or for military service.

After what was considered the “success” of Russian efforts at the al-Rukban camp, the next Russian mission began achieving international gains and renormalizing relations between the regime and the international community. Numerous sources said that the main OCHA office in Amman has begun logistical preparations to return to Damascus. The Damascus office will then become responsible for overseeing other offices, with Turkey’s office considered the most important because it is responsible for coordinating relief efforts in areas under opposition control in northern Syria.

It is expected that a number of European countries will take a position against this step. But what will this return accomplish? Technically, not much will change in the work of OCHA, which never cut its relations with the regime. But what could change is this: The assessments of needs and the responses to it, whether in regime or opposition-controlled areas, and naturally the increase of regime influence logistically and economically over this support.

The greatest share of Syria’s residents are currently in areas under regime control. But the biggest portion of those most in need and most affected are in opposition-controlled areas in northern Syria, as well as, of course, the camps for the displaced, such as al-Rukban and al-Hol.

The regime, which is suffering from a severe economic crisis in the areas under its control, will use the transfer of OCHA’s central operations to Damascus to direct aid to its base, and the least affected segments of the population. It will exploit this aid to help influential regime figures who have signed contracts to distribute and secure the needs for OCHA’s operations, as well as what it will gain from this return in terms of foreign currency. This is all in addition, of course, to the political gains achieved through the return of one of the United Nations’ main offices to Damascus.

The biggest damage will be to the work being done in opposition-controlled areas. Certainly OCHA will not stop this work, but the aid groups operating with them inside these areas could find themselves forced to coordinate with agencies working under regime supervision—specifically the Syrian Red Crescent—to coordinate the entry and distribution of this aid. The regime will receive data of those in need of aid and those working in the aid field, as well as the distribution and operation points and warehouses, as well as everything else connected to this matter—if, of course, rebel groups allow this type of coordination in the first place, which would put them in conflict with aid groups, international agencies, and those in need of aid.

The regime may have opened its doors to welcome the return of UN offices to Damascus, but it will only permit the office that helps them with political and economic gains. It will welcome funds that will be transferred internationally to its economy under the umbrella of “aid”, but it will certainly not open its prisons to the United Nations. It will not allow them to inspect the sites of massacres and crimes that it has committed. And of course it will not agree to any monitoring of elections or evaluation of the human rights situation. Here, we must wait and assess the position of the United Nations itself.