It has been one year since the regime dropped sarin and chlorine gas on Douma, killing 41 civilians and injuring hundreds more writes Zaman Al Wasl. 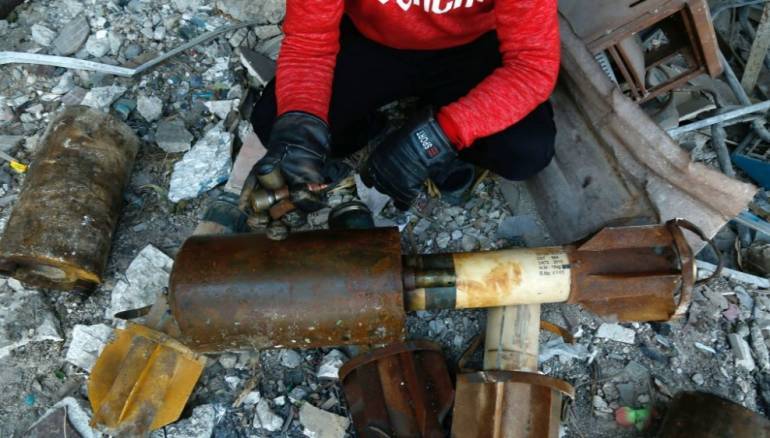 One year has passed since regime forces targeted Douma, the capital of the eastern Ghouta suburbs, with chemical weapons that left dozens dead and wounded.

The victims were in shelters and underground basements, trying to escape the heavy shelling on the city, during the regime’s deadliest offensive on the eastern enclave of Damascus last April.

The Syrian Network of Human Rights (SNHR) documented the death of 41 civilians, including 12 children and 15 women, with around 550 wounded in the chemical attack on the city.

Mukhtar al-Domani, a survivor of the chemical massacre, described the incident to Zaman al-Wasl saying, “On Apr. 7, 2018, at 08:45 pm, after a bombing campaign that lasted for several days, two helicopters flew over the city of Douma and threw two barrels of sarin and chlorine gas over the al-Quasarna district, onto residential buildings in the city centre.”

Adding that, “The regime chose a specific timing for the bombing, as it deliberately took advantage of the weather that contributed to the spreading of gas all over Douma.”

According to Domani, this resulted in the spread of a strange and foul smell across the city, while ambulance teams rushed to the scene to transport the injured who were fainting and foaming at the mouth, especially children, women and the elderly who died of suffocation.

Khaled al-Homsi, another witness to the incident, said: “I was forced to stay with my family and some of my relatives in a shelter near the medical center in the Abdul-Rauf neighborhood. Then a strange smell started to seep into the area and we knew that it was poisonous gases, so we immediately hid inside the medical center. It was a hysterical and frightful scene when we arrived, some people were dead, others were lying on the floor struggling to survive. Especially the children who were vomiting and suffering of convulsions and muscle cramps, with red eyes and foaming mouths.”

He added that the chemical gas caused severe chest pains and difficulties breathing. Because of the siege imposed on the area, doctors and nurses at the medical center were unable to provide any treatment, other than spraying the injured with cold water and giving them an injection to help the expansion of air passages, to save them from death.” Homsi also noted that he lost many of his family and relatives that day.

The fact-finding mission by the Organization for the Prohibition of Chemical Weapons (OPCW) confirmed, in a report released a month ago, the use of molecular chlorine, based on medical and environmental samples obtained during their inspection of the area.