The UN Special Envoy to Syria, Geir Pedersen, has said that he is working towards constitutional reform, rather than, a brand new constitution writes Hurriya Press. 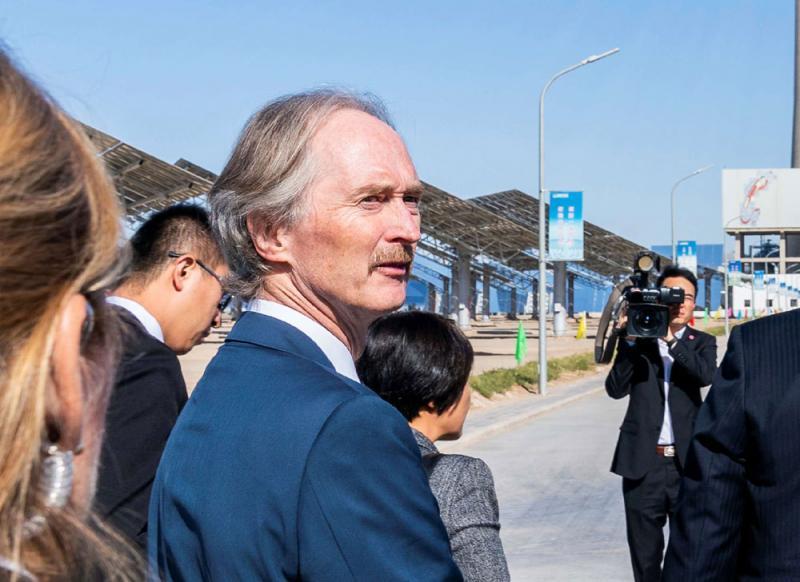 The UN Special Envoy to Syria, Geir Pedersen, said that his task is to work for, “constitutional reform and comprehensive elections under the supervision of the United Nations.”

In a lengthy interview with the Al-Sharq Al-Awsat newspaper published on Wednesday, Pedersen, who took over his duties this year following the resignation of Staffan de Mistura, said that his authorization from the United Nations in accordance with Resolution 2245 was to work towards constitutional reform and comprehensive elections with UN supervision, “but what is very much necessary is not to issue judgements on the results of the negotiations. It is not my role to say what the content of the constitution will be—this is a sovereign Syrian decision.”

By summarizing the UN role as “constitutional reform and elections” the new Envoy is falling completely into the Russian trap, and has become envoy to their plans and is not implementing the international mechanisms that are stated clearly in the Geneva declaration of 2012, which should achieve a political transition and establish a fully-empowered transitional ruling body. Russia has been able to circumvent this by creating an alternative track to the Geneva track (Astana and Sochi). This is evidenced by the fact that the Envoy has given up the Geneva declaration issued by the United Nations and has started working to achieve the outcomes of the Sochi National Dialogue conference which was held at the start of 2018 under Russian pressure. Over time, forming a constitutional committee to draft a new Syrian constitution, has become just “constitutional reform” to Bashar al-Assad’s constitution, which he approved in 2012 and which confirms him in power for two additional terms after 2021.

A few days ago, French President Emmanuel Macron proposed to Russia a plan to resolve the situation in Syria, which included “constitutional reform” and cancelling the “constitutional committee,” and disregarding the development of a new constitution. With this plan being developed in the West, it suggests that it being prepared to market it through the United Nations.

Pedersen noted in his interview that “work is underway to form a Syrian constitutional committee” saying that he is working at the same time for a “comprehensive approach” including an agreement on the committee’s operating rules and discussion of the “four baskets,” which include, “governance, the constitution, UN-monitored elections, and security and counter-terrorism.” The Special Envoy did not address the issue of prisoners, which is a priority for many Syrians, despite the fact that a delegation from the Negotiations Committee had discussed the matter with Pedersen two days earlier.

In this respect, the head of the Negotiations Committee, Nasser al-Hariri, said that, “the prisoners committee in the Negotiations Committee discussed with Special Envoy Geir Pedersen in Geneva the matter of prisoners and mechanisms to fundamentally resolve the issue under the Geneva umbrella, considering that it is a basic criteria for a secure and neutral environment and a central issue for the Syrian people.”

The constitutional committee, which resulted from the Sochi National Dialogue Conference, has not been announced officially by the United Nations as its formation has stumbled several times due to the dispute over the independents who are supposed to comprise a third of the committee’s members (150 members: 50 for the opposition, 50 for the regime, and 50 for independents). Russia is insisting that the Assad regime head the committee and that the “independents” be those close to it to ensure that it constitutionalizes the rule of the Assad regime and legitimizes the Russian occupation of Syria.