Despite Bashar al-Assad now being in control of the large majority of the country, his problems are far from over writes Alsouria Net. 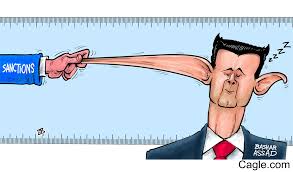 At a time when fighting has almost completely calmed in Syria and the regime has regained about 60 percent of Syrian territory, Bashar al-Assad is confronted by six severe crises, which he will not be able to overcome in the near future, and which comprise factors of weakness for him on the local, regional and international levels.

Statements by regime officials, starting with Assad himself and then his media reflect a delusion about the “end of the major crises” which the regime suffered from, and the beginning of a phase of recovery and regaining the reins on matters which had been lost for eight years, even during the moments when Russia and Iran gave their strongest support.

But facts points to another stage of complicated crises in which the regime is drowning more and more, the outlines of which will be drawn in the coming phase, and which will increase the longer they continue.

The Army Does Not Belong to Assad

The military establishment is one of the biggest dilemmas for Assad. After eight years of fighting, the regime has lost a large number of its fighters, planes, and military equipment. The regime army today is exhausted, and has been transformed into a stage for competition between Russia and Iran, who are trying to take control over it in large part.

The regime finds itself now governed by the interests of stronger countries. It is stuck between Russia’s efforts to ensure the centralized unity of the army through the elimination of some units and by integrating others with bigger units, and between Iran, which is trying to maintain unofficial military formations.

The gradually escalating Iranian-Russian competition is not limited only to military aspects, as both countries are also trying to present themselves as the most effective and influential players in Syria on the political, economic and intelligence levels—even in the educational sphere.

In recent years, the regime has tried, with a heavy reliance on the Russians and Iranians, to pursue a policy of reconciling the interests of the two countries to satisfy them at the same time. They have achieved some success in that, but matters seem to have begun to move outside their control, and they find themselves getting closer to Iran at the expense of the Russians.

The continuation of this competition is forcing Assad to take clear a position on sensitive issues, and without a doubt these will satisfy one of these two countries while angering the other, which will impact it negatively.

Assad inclined toward Iran in rejecting the safe zone in northern Syria, and stands with them condemning the Israeli bombardments of Syrian and Iranian forces, and Assad supports the expansion of Iranian militias towards the border with the occupied Golan.

This position is completely opposed to Russia’s, as Moscow does not object to establishing a safe zone and it is still allowing Israel to strike the regime and Iran, and is trying to keep Iranian militias out of southern Syria.

Russia did not hesitate in sending a message of annoyance to Assad. After his recent speech on Feb. 17, 2019, in which Assad appeared to challenge the Russian role in the “constitutional committee,” a photo was leaked which Syrians described as “humiliating” to Assad, in which he was shown waiting for Putin with his officers in the Hemeimeem airbase for the end of the speech, which Putin delivered to soldiers at the base when he visited in 2017.

One of the most important messages which Tehran wanted to send to Moscow in receiving Assad on Feb. 25, 2019, was that it was able to summon him when it wants him to offer them his thanks and to say that Russia does not have the deciding word on Iranian forces leaving Syria.

However, while Assad was meeting Khamenei and Iranian President Hassan Rouhani, the Israeli Prime Minister, Benjamin Netanyahu, was in Moscow, and agreed with Putin to form a working group, one of whose main tasks will be to find a way to get foreign forces out of Syria.

The United States is still insistent on its position rejecting Assad’s return to the international stage, and European Union countries are divided with regard to his rehabilitation. Some countries such as Germany and France have begun legal proceedings against Assad in an attempt to hold him to account for the crimes he committed, while a group of British lawyers last week moved with the same purpose, and raised two suits against Assad in the International Criminal Court.

On the Arab level, rapprochement with Assad is full of hazards. The Arab League is divided against itself with regards to Assad’s return, and after the United Arab Emirates and Bahrain reopened their countries’ embassies in Damascus, and the Sudanese president visited Assad in Damascus, Washington stopped attempts to restore relations with the regime by passing the “Caesar Law”, which imposes American sanctions on all those who try to support Assad.

Reconstruction is the fourth challenge that Assad faces, as he is still unable to reconstruct destroyed areas. The regime recognizes it is unable to secure the 400 billion dollars needed for reconstruction.

The Caesar Law blocks the path before any attempt to support the regime economically or any step to revive it, while Russia and Iran are limited their participation in reconstruction because the two countries face their own economic crises.

Assad does not have many choices when it comes to resolving this crisis. The American and European sanctions still weigh heavily on it. Since 2011, America and the European Union and the United Nations have imposed sanctions on imports, such as certain types of fuel and on Syrian individuals accused of supporting the regime financially.

Brussels strengthened sanctions in January, and issued more measures against 11 businessmen, which led, alongside the Caesar Law, to Syrian businessmen who say they are not connected to the regime worrying that these sanctions could harm anyone connected to reconstruction in any way.

No Return to “Assad’s Embrace”

Most of the refugees, who number 5.6 million, are refusing to return to Syria, despite the many pressures put on them and the serious number of challenges they face in countries of refuge.

Among the goals that the regime and Russia are trying to achieve by returning refugees to Syria, is to use this matter as a key to restoring Arab and European relations with the regime, and to encourage these countries to see the need to participate in the reconstruction to encourage refugees to return.

The two sides are also trying to exploit the huge human mass represented by the refugees, who if they return will be used by the regime to bolster itself militarily, and to distance itself from the threat of international attempts to hold presidential elections under strict supervision, in which Assad would of course not receive the votes of those he displaced and killed.

Internally the regime finds itself faced with unprecedented popular anger caused by the decline of living conditions and the spread of corruption and nepotism. These conditions have pushed the regime’s popular base to protest against it in an unprecedented fashion for loyalist.

In regime-controlled areas, fuel, gas, and electricity have disappeared almost entirely, coinciding with the collapse of the economic capacities of Syrians, and the severe inflation in prices. Since the beginning of 2019, the regime has been subjected to a major wave of criticism from its loyalists, with this reflected in the collapse of the image of “state prestige” which Assad has bolstered among his loyalists.

It does not seem that the regime will soon rid itself of this severe crisis, as long lines of Syrians are still filling the streets to obtain gas canisters, and the Syrian pound is still declining, which negatively impacts the regime’s economy. This is in addition to its inability to secure electricity in regime-controlled areas, which is now only available for limited hours of the day.