France has reportedly reached out to Moscow to break the impasse of the constitutional committee and speed up the process of elections in Syria writes Asharq al-Awsat. 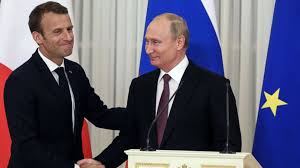 Official French sources have revealed contacts between Paris and Moscow to reactivate the Syrian political process by way of the constitution. A proposal has been communicated, by way of high-level contacts, based on the understanding that the agreed-upon international process, which stipulates the formation of a constitutional committee of 150 members who will be entrusted with the task of writing a new constitution, be subsequently approved and upon the basis of elections that will be conducted, is “extremely complex.” Evidence of this is that the committee has not yet been formed, and that explosive issues would subsequently erupt with the launch of this committee if it reaches that stage.

The sources added that the proposal transmitted to Moscow, which it agreed to, abandons the desire to write a new constitution and is based on the existing constitution and, “working to amend five or six points of dispute.” These points include the broad powers of the president, the independence of the judiciary and some state institutions, and the relationship between the security institutions. Sources added that these amendments, “should be discussed with international supervision to arrive at an amended constitution instead of losing time by drafting a new constitution.” The subsequent stage will be, “moving towards new transparent elections overseen by the United Nations, which has experience in this field.”

The French sources said that the proposal, which means giving up on efforts to establish a constitutional committee, was transmitted to President Vladimir Putin, who in turn transmitted it to the Syrian President Bashar al-Assad. According to Paris, the latter, “agreed to it on the condition that the elections be limited to inside Syria,” that is, excluding the millions of Syrian refugees in neighboring countries and in Europe. That means that he wants to, “make sure in advance that he will be reelected” in a process that will give him new legitimacy.

The West is insisting that the elections enable those who left Syria to cast their votes in the process determining their country’s future. The condition that Assad imposed derails the Western proposal, which had intended to get out of the dead end that the formation of the constitutional committee has found itself, and therefore attempted to relaunch the halted political process.

Meanwhile, French diplomats are interested in the efforts being exerted to “rehabilitate the Syrian regime among Arabs” by way of restoring Damascus to the Arab League. According to Paris “a group of American opponents” who have so far frozen the efforts that intend to ensure Syria’s return at the upcoming Arab summit in Tunisia.

The French vision is based on the belief that this issue is an “internal Arab matter” and that Paris “does not want to influence it” but that it “does not object in principle” to the return of Damascus. They are wagering it on the “active launch of the political process”—that is, Paris does not want this return to be a “free gift” for the Syrian regime, and Putin succeeding in this mission was “unacceptable.”

Other sources said that Westerners were, “aware that the situation in Syria is headed toward a reshuffling of the cards after the change of the shifting American position” which Paris has suffered from.

Paris says that President Macron “had a role” in pushing Trump to revise his position around the complete withdrawal of his forces from northeastern Syria, but that it is still “cautious” about what might come from Washington, after the elimination of the Islamic State from its last pocket. France did not hide its appreciation for the 200 American troops remaining in the areas controlled by the Syrian Democratic Forces, and perhaps the same number in the al-Tanf base. It has not yet revealed if this American shift will encourage it to participate in overseeing the “safe zone” that Washington wants and whose outlines have not yet appeared.

According to the sources, Paris is still pushing its Western allies and Arab friends to, “avoid any participation in the reconstruction process in Syria” without conditions for the launching of the political process, because it is the “main card” to put pressure on Damascus that remains if Washington withdraws from Syria, which will leave the stage open for Iran and Russia. It believes that, “giving the task of confronting Iranian influence to Israel will not lead to the results Washington desires, because all Israel has achieved is preventing Iranian bases settling on its borders, and not removing Iran and those who represent it on the ground from Syrian territory,” according to the sources.