The campaign, which was launched in 2017, is pushing back against the ideologies of Hay’at Tahrir al-Sham, that has taken control of large parts of northern Syria writes Salon Syria. 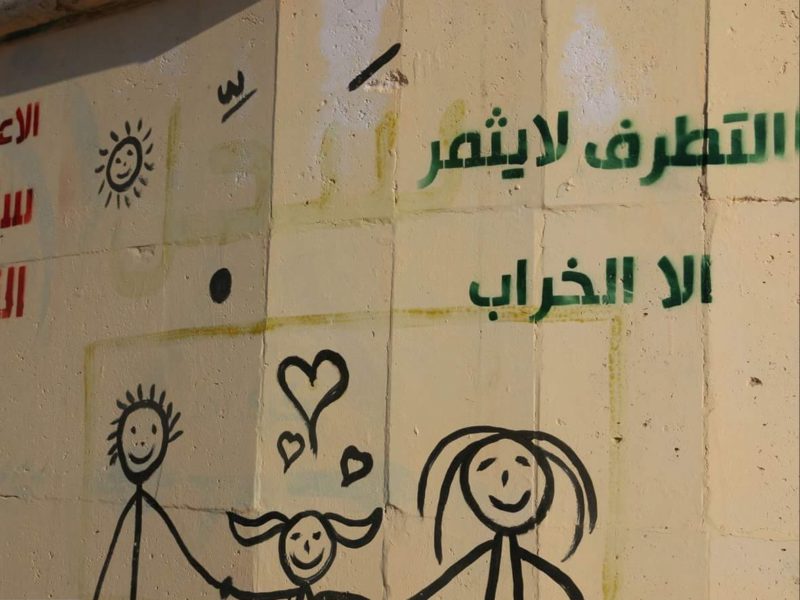 After Hay’at Tahrir al-Sham took full control over Idleb province, activists launched the campaign “Syrians Against Extremism” with the aim of raising awareness about the dangers of extremism and extremist ideology in Syria, among all communities.

The campaign began at the end of 2017 and is still ongoing in all parts of Idleb and its countryside.

Campaign organizer Nassib Abdelaziz, 31, said, “With the campaign, we are trying to distance the largest possible portion of the populace, which the terrorists groups might have been successful in attracting, especially after we saw the formal transformations of these groups recently.” Abdelaziz said these changes included changing the name al-Nusra Front to Fatah al-Sham and then Tahrir al-Sham, and playing with structures such as mergers, blocs, and civil administrations.

Standing against extremism and terrorism has been an issue adopted by many of the Syrian revolution’s activists, figures and thinkers. Even before the emergence of these organisations, they warned of how they could obstruct and threaten the revolution’s legitimate aims of freedom and dignity.

“On this basis, the ‘Syrians Against Extremism’ campaign was not born of this stage, but is a step on a path to building a civil, peaceful Syria that rejects violence and terrorism,” explains Abdelaziz. He adds that the aims of the campaign are limited to preventing the spread of extremist ideas in general and in particular among young men and adolescents, “which the extremist groups try to win over and exploit to carry out their aims, through their media and by manipulating religious concepts and moral values, which shows the real image of the al-Qaeda group.” Abdelaziz says that, “despite their attempts to obscure their real faces, the campaign is working to make sure al-Qaeda is unable to obtain a popular base, win the support of residents and keep away from its projects other forces in the areas al-Nusra is deployed.”

Syrians Against Extremism is a public campaign, but it has concentrated its efforts in the areas of northern Syria, and especially Idleb and its countryside, the southern and western Aleppo countryside, and the northern Hama countryside, which are the areas controlled by Hay’at Tahrir al-Sham, which is working to create changes to ensure its stability within Syrian society.

The campaign includes the distribution of brochures containing the views of influential figures, especially trustworthy clerics, and putting up posters showing the effects of extremism in a clear manner, as well as graffiti, and videos on the campaign’s social media platforms. The interaction and response to the campaign has been “very positive”, especially in light of the conditions that the area is undergoing and which was clearly influenced by extremism and its negative effects.