With 13.1 million people in need of aid in Syria, ensuring that it is delivered is a logistical nightmare and guaranteeing that it gets to the right people is even more difficult writes Al-Araby al-Jadeed. 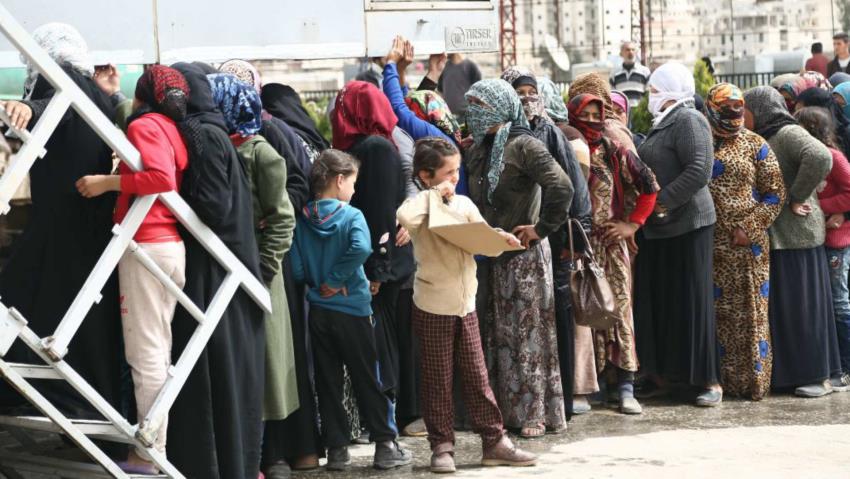 The recent extension in December 2018 of UN Resolution 2165 (now 2249), that covers UN cross border humanitarian assistance to Syria, combined with the growing influence of Damascus around the country in the past year, has once again raised questions about the future of the humanitarian response in Syria.

With more than half the original population of the country, over 13.1 million people, currently thought to be in need of humanitarian assistance according to UNOCHA, much emphasis has been placed on the importance of cross border aid from Turkey and Jordan.

However, an estimated 60 percent of the humanitarian response is still delivered from within Syrian government controlled territory, under difficult conditions, both practically and ethically.

The ethical dilemmas surrounding aid delivery in war zones is not new. In Syria, as in other civil wars, there is not only a state determined to maintain control over the nature and direction of humanitarian assistance, but a regime who is very often the direct beneficiary of this process.

The rapid rise in humanitarians exploring registration in Damascus in the past two years suggests that the growth of NGOs wanting to work in government-held areas is far from over, compounding this issue further.

But, to start working legally requires successful completion of a complex and idiosyncratic registration process that authorities in Damascus have kept unstandardised and unofficial.

Not only does this delay assistance to Syrians who truly need it, but it also continues to politicise the humanitarian response in Syria as well as test its founding principles even before aid delivery has begun.

Since 2011, the registration process for humanitarian organisations wanting to work in government-controlled areas has been firmly under the purview of the Syrian Ministry of Foreign Affairs.

In co-ordination with the various Syrian security services, registration involves the investment of significant amounts of time and money by INGOs.

Not only do they need to conduct scoping visits to Damascus, liaise with one of only a few potential Syrian partner organisation willing to work with INGOs (particularly the Syrian Arab Red Crescent and Syria Trust, the latter headed by the President’s wife, Asma al-Assad) but also experience invasive and time consuming background checks into the organisation’s operations, budget size and staff members.

In some cases these checks extend to the activities of employee’s spouses who are not involved with the humanitarian sector. For example, the Lebanese country director of an INGO that registered in Syria in 2016 had her own family file as well as the family file of her non-NGO Lebanese husband investigated by Syrian authorities.

Gaining official registration with Damascus can take anywhere from nine months to two years and even if successful, it is only the beginning of the process.

This plea is problematic for the way in which it conflates two issues; humanitarian aid for people in need, and rebuilding. Nobody is begrudging anyone the former, but the latter remains extremely problematic and external funds will only serve to consolidate issues.

Visas for international staff need to be subsequently applied for and granted (by no means a quick or guaranteed process even with registration), office space needs to be rented, lawyers with good connections hired, local staff recruited and approved by local partners and security services.

Administrative issues such as solving the complex payment and money transfer system for salaries and project costs that runs through only a handful of banks in Damascus need to be worked out, not to mention all of the above needing to be in compliance with international sanctions, anti-terrorism and anti-corruption laws as well as donor regulations.

Despite these challenges, in January 2016, around 14 INGOs were officially operating out of Damascus to government controlled areas of the country. By mid-2018, that number had over doubled, to 31.

However, only seven of these have managed to work in both opposition and government areas during the conflict. Put another way, over 75 percent (24) of these 31 INGOs have only ever worked in government controlled areas of Syria in the history of their organisation. With at least 36 other INGOs thought to be in the process of registration or exploring operating from Damascus going into 2019, the growth is not yet over.

Issues With the Registration Process

Three main issues arise regarding the INGO registration process, that all ultimately constrain the response of an organisation before they even begin operations. Firstly, the process of registration and subsequent steps is complex and time-consuming. This consequently delays aid to people who need it.

This effectively intensifies and entrenches a polarised, one-sided humanitarian response in Syria.

Finally, the registration process (and start up operations) require costly technical expertise and other payments that inevitably help support and sustain the incumbent regime.

Such concerns have been raised previously by INGOS in 2016, but these focused on operations and did not extend to the registration process.

While there is no doubt that there is urgent humanitarian work to be done in Syria, it is important to stress that the only certain beneficiary of the current registration process is the Syrian government.

Effectively, external NGO funding for the INGO registration process and following start up processes only consolidates the Syrian government’s existing monopoly over where and to whom aid is allocated, effectively setting conditions before operations begin.

As the Brookings Institute’s Steven Heydemann recently observed, “Anyone who thinks funds provided to the regime will: Be used to support those not deemed loyal; Be used to provide for safe return of refugees; Be used to assist IDPs from opposition areas to return; Be used in ways that are not corrupt, Is naive, a fool, or a loyalist.’

In all civil wars, by bringing political, economic and social resources to the table, humanitarian organisations can be implicated in either strengthening or undermining existing power systems and structures.

Spent first week November in Damascus. The moral hazards for principled NGOs in government-controlled Syria are immense. There is urgent humanitarian work to be done, but let’s call the main task what it is: reconstruction of infrastructure that government itself destroyed.

choosing where we work using own criteria (# of IDPs served, for example) and tying it to teacher training, curriculum development, and other “soft” support.

In the case of Syria, this has been all the more heightened because of the regime’s strangle-hold over humanitarian access, but also can be applied to the time before operations, to the INGO registration process itself.

While different approaches have been seen in the past in how NGOs react to government constraints, such as Mercy Corps taking the defiant step of leaving Syria after threats by the government due to their work in opposition areas, Damascus currently holds all the cards in terms of what organisations are granted access and who receives assistance.

While some other organisations try to work within the system, such as the Norwegian Refugee Council, who choose “light rehabilitation” and try to insist upon where and with whom they work, their mere presence in Damascus inevitably means that a certain amount of their budget and resources will be directed to regime interests.

In light of this, and the rapid rise in humanitarians exploring registration in Damascus in the past two years, it is imperative that policy makers and humanitarians better understand the implications of the Syrian registration process and how it too contributes to constraining and polarising the humanitarian response, benefiting the regime and testing humanitarian principles.

Paul Hastings is the pseudonym of a Middle East based security analyst who has focused on Syria and the region since 2010. His research focuses on humanitarian access, ceasefire and reconciliation agreements, and conflict analysis.

Marika Sosnowski is an admitted lawyer and PhD candidate at the University of Melbourne. Her research focuses on ceasefires, statebuilding and governance, with particular interest in the Syrian civil war.