The sustainability of education for displaced Syrian children is threatened, as donors hesitate to predict how much longer refugees will remain in host countries writes Al-Araby al-Jadeed 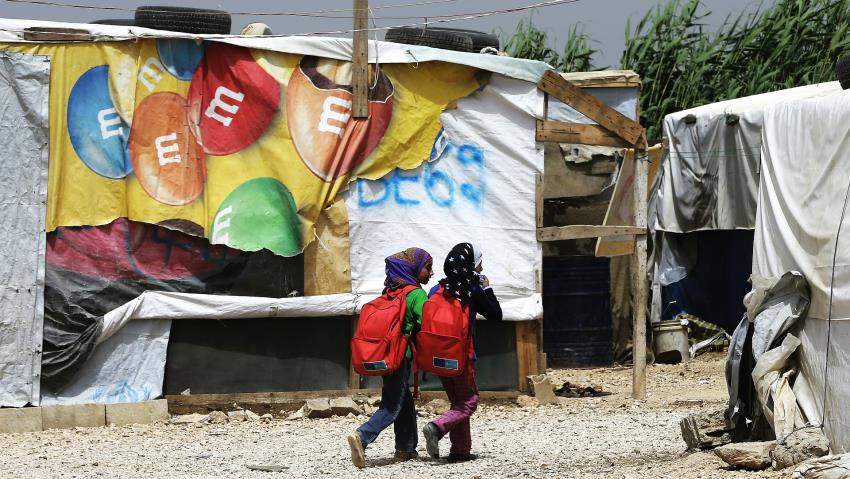 As the war in Syria continues, with fighting in the countryside of Hama and Idlib and in the province of Deir az-Zour, political and financial elites circle the remains of Syria.

The outcomes of their negotiations will go a long way in shaping the future of the country. But amid the talks of political settlements and reconstruction, humanitarian concerns, such as the future of a generation of Syrian children, are often put on the backbench.

In Syria at least 2.8 million children under the age of six have known nothing but war. Living under constant fear of bombardment and violence, many children in Syria are reported to live in a state of ‘toxic stress’, a state that if left untreated can irreparably damage a child’s cognitive development. Many children have plunged into depression or anger, and self-harm, suicide, and acts of violence are on the rise.

Where these children have had the opportunity to access psychosocial support, results have been impressive, says a 2017 report by Save the Children, one of the most up-to-date accounts on the situation of children in Syria. But in besieged areas under heavy bombardment, such professional support is rarely available.

Data on the current educational opportunities in Syria speak for themselves. 1.7 million children inside Syria have stopped going to school and over a third of all schools have been bombed or taken over by militias as headquarters or prisons.

At the same time, 180,000 educational personal have fled the country and the UNHCR has received only 55 percent of the expected funding it needed to support Syrian children’s access to education in 2018.

In such circumstances, widespread lack of security and poverty are pushing parents to send their children into early marriage and labour.

“The rate of marriage of girls as young as 11 has increased since the start of the war. This is not just a product of poverty: fear of rape, an unspoken ghost that follows all Syrian women, is one of the biggest reasons. Families believe their daughters will be protected from sexual violence if they get married,” a spokesperson and activist for WomenNow in Idlib explained to The New Arab.

Often lacking better prospects, many children have turned toward the local militias, the only groups who can still provide a steady income in return for participation in military activities.

Randa, a Syrian activist from Deir az-Zour who spent the last two years in Idlib before fleeing to Lebanon, told The New Arab how common it was to find 14 or 15-year-old boys at checkpoints in rebel-held areas.

“That’s where most young soldiers are placed. When they walk around the car you can see their face, and some still don’t even have a beard!”

Living in Deir az-Zour during the Islamic State [IS] group’s initial occupation, Randa told us how easy it was for militias to recruit minors.

“They targeted young males from the uneducated population, especially from the rif, the countryside. They could control them easily, giving about $50 salary, a uniform and a gun after a quick training on how to use it.

“They used the youngest boys as informers, getting the children to spy on their own families often just in exchange for a hot meal and some cash.”

In a context of widespread violence, joining a militia can also be a way of finding a place and a meaning to one’s life.

“Daesh [IS] doesn’t just pay wages. They also teach that if they get killed fighting jihad they will go to heaven. The boys get brainwashed in justifying the violence they perpetrate for some higher purpose. Not even their parents can stop them from believing what they have been taught, because violence is all they know, is all they remember knowing.”

As the Syrian regime and its allies continue to fight extremism with indiscriminate shelling of civilian areas, they perpetuate a vicious circle that recreates the conditions for the recruitment of the most marginalised.

Perhaps, as Randa explains, “If more effort was given on supporting children to find stability and the possibility of a future, extremists would have a harder time recruiting in Syria.”

For those children who fled Syria, the situation is perhaps a little brighter. Being relatively removed from the conflict zones, refugee children in Syria’s neighbouring countries are relieved from the direct effects and psychological traumas of war.

Nonetheless, the precarious conditions most Syrian refugee children live in daily, place them at a high risk of exploitation and abuse. Child labour and child marriage are prevalent in Turkey, Lebanon and Jordan, the three bordering countries hosting most Syrian refugees. To face such problems, each host country has come up with its own ways of supporting Syrian children.

In Lebanon, all Syrian children are given the opportunity to go to school with no fees and no need to produce any ID, in a second shift system whereby Lebanese children attend school in the morning and Syrians go to the same schools in the afternoon.

Similarly to other aid programmes in Turkey and Jordan, such a service has been mostly funded by international donors, the EU especially. Moreover, there are many organisations – international and local – working to change the odds and ensure that Syrian children get the minimal educational support they need.

For children aged four to 12-year-old, this has proved relatively successful, getting about 220,000 children into school – nearly half of the Syrian children in that age bracket. This means that for Lebanon’s underfunded public-school system, there are now more non-Lebanese nationals (Syrian, Palestinian and Iraqi refugees) than there are Lebanese.

This comes as the consequence of widespread poverty among the refugee population, driving families to send their children to work or get married at that age. However, disincentives generated by unfavourable socio-economic conditions are not the only reasons keeping Syrian children out of school.

In January 2015, Lebanon changed its laws related to the permanence of Syrian nationals on its territory. The law obliges all Syrians above 15 years of age to pay an annual residency fee of $200, to possess a valid ID, a legal entry permit, a confirmation of place of residence and, for those not registered with the UNHCR, a Lebanese sponsor. Such money and documents are not accessible to most, affecting children’s accessibility to secondary education.

This article is the third in a six-part series investigating the issues of return of Syrian refugees from Lebanon.

However, there are people who fight against all odds to keep Syrian children at school. Mustafa H is one of them. Arriving to Lebanon in 2012 as a young Syrian teacher from Damascus, Mustafa now heads three Syrian schools in Tripoli.

“I used to teach people who later fought against each other in Syria. But I refuse to fight violence with violence. It makes sense to me that the future of Syria is with our children, so right now, the most important way I can fight for my country is to run these schools and make sure children receive an education.”

Mustafa’s job is not easy. Balancing his own personal hardships as a refugee with precarious status, he established the first school in 2015 with around 300 children. Three years later he directs three schools with over 3,000 children from the surrounding neighbourhoods, including Palestinian and Lebanese children.

“My first problem is with big international NGO’s and the UN. There have been billions of dollars poured into the Lebanese education system from abroad, but of all this money only a part goes to supporting the children. The rest disappears.”

Mustafa’s critique is not unfounded. A Human Rights Watch report issued last year confirms that lack of transparency is endemic when it comes to accounting for donor’s money arriving to Lebanon to support refugee’s education, resulting in the loss of millions.

“Unfortunately, what is left often goes to paying high salaries and providing tokenistic education. For example, when I started working in Lebanon, my first role was to evaluate a special fast-track programme teaching French to Syrian children needing to catch up with Lebanon’s francophone school programme. I couldn’t believe it, but after six months the kids had only learned how to count up to 10.

“At my schools we rely mostly on donations coming from the Gulf, but these come only with certain conditions, which often clash with the secular education I guarantee in my schools. So, I do not know for how much longer they will continue funding us.”

As regional policy shifts toward preparing the pathway for the return of Syrian refugees, the sustainability of education is threatened, as donors hesitate to predict for how much longer refugees will remain in host countries.

For Mustafa, sustainability is key as he works to ensure that all kids get their school certificates officially recognised.

Despite all of this, Syrians are showing their resilience both at home and abroad. Many families challenge the daily fear of sending their kids to school, whether in a war zone or in a refugee camp abroad.

“Education in Syria was a right, and as such it was provided to everyone for free,” Mustafa concludes.

“This conflict has taken everything from us. But we need to give a chance to these children before they turn into a lost generation.”