In order to provide for themselves and their families, Syrian women have stepped up and taken jobs that were traditionally only for men writes Alsouria Net. 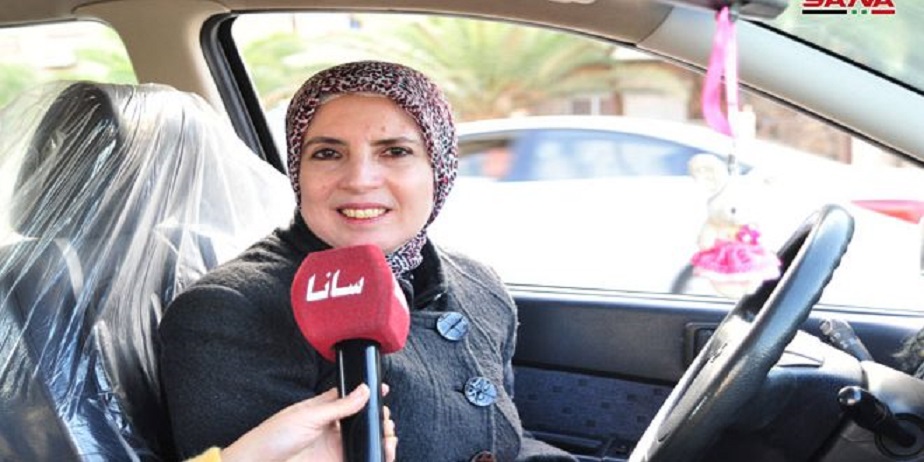 Syrian women have tasted the bitterness of forced displacement and the loss of breadwinners, husbands and sons, whether through displacement, kidnapping, arrest or death. This has pushed them to practice professions that had been traditionally monopolized by men—and this situation has changed their lives radically and changed them into the leaders of families inside and outside the walls of their homes.

Ibtisam, a Syrian woman, does not heed the view of society and its lack of acceptance of her profession, and she also has not surrendered to the conditions of life and the war. She has decided to overcome them through her will and determination, and so works as a taxi driver to earn a living for herself and her family.

Ibtisam Abou Qura told the regime news agency SANA, “After my husband died I could not rely on anyone else and I had to depend on myself. I worked with my brother in an herbal pharmacy in Damascus, but the war which devastated the live of Syrians and changed its features forced me to choose another profession. My car was the one solution to improve my life and to withstand the conditions of the war.”

Ibtisam knew that she was choosing a strange profession, but she overcame this through confidence and her ability to achieve success, saying that, “Women are able to confront all difficulties, and they are no less willful or patient than men.”

In 2012, Ibtisam began her work in Douma as a taxi driver and was ferrying passengers to Damascus and the airport, but the consequences of the war forced her to leave Douma and head to the town of Sahnaya and continue her work and gather new customers who came to her and her car because of her good treatment.

Ibtisam was not the only one to work as a taxi driver, as pro-regime media has previously reported the story of Samira Helwani, who works as a taxi driver—and driving a car was not strange for her, as she had previously worked as a microbus driver on the Jaramanah-al-Bab line.

It has also become normal in Damascus to see women working as waitresses in coffeehouses, such as Reem (a false name) who previously told Alsouria Net the story of working in one of Saruja’s cafes in Damascus, saying: “Our family has four girls and two boys, as well as my father and mother. My brothers were forced to flee to escape military service, and my father is no longer able to provide for us. This pushed me to work in the coffeehouse.”

Amal (a false name), 42, was also forced by circumstances, to work at a booth selling tobacco, after the death of her husband. The work does not bring in more than her daily needs for her and her son Hassan, who is 10.

Finally, Syrian women have entered a competition to become a government bus driver, which was announced by the Assad regime’s Syrian Trading Establishment, with three women chosen for the job which has long been exclusive to men.