Syrian-American activist Rania Kisar moved back to Syria from America and witnessed the start of the revolution writes Zaman Al Wasl. 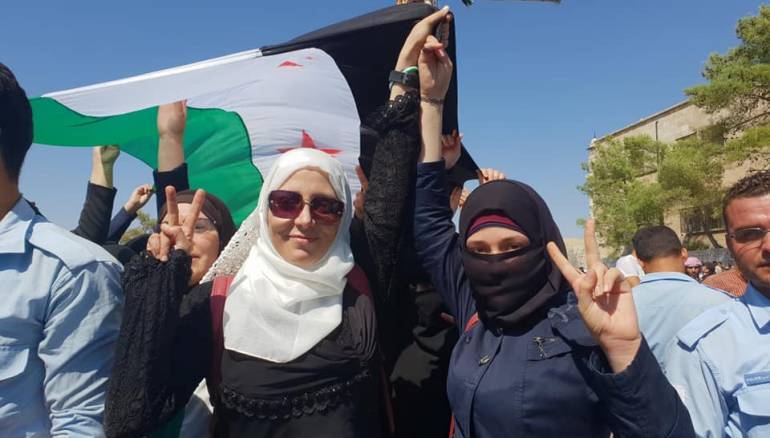 The Syrian-American activist Dr. Rania Kisar introduces herself on her official Facebook page as an advocate for freedom, human rights, justice and for the dignity of the proud.

Last Friday, footage featuring the outspoken woman went viral on social media when the Syrian orator rallied hundreds of people in the northwestern province of Idleb demanding the overthrow of Bashar al-Assad, chanting the eight-year-old slogan, "The People Want to Bring Down the Regime". The slogan first emerged during the Tunisian Revolution

Zaman al-Wasl interviewed Dr. Kisar in the town of Maarret al-Nu'man in order to shed light on the story of a high-profiled activist, whose most significant quality is that she is simply a Syrian citizen who was in love with her country and devoted to it, despite having the American citizenship.

She chose to work with people, in the most difficult circumstances; starting in the field of relief work and then establishing a developmental educational organization, which she achieved after having helped rehabilitate managers of the local councils and the building of its structures and tasks. Rania story is a Syrian tale worthy of being narrated and heard by Syrian people and by the entire world.

Kisar lived in the United States, where she studied, worked and then served as the director of the admissions office at Dallas University in Texas. She returned to Syria to work in Damascus, where she witnessed the start of the Syrian revolution. She sided with the opposition and did everything in her power to support the revolution and to help the Syrian people. She stood by them and made sure their voices reached every corner of the world.