Conflict has caused many children to fall behind with their education and harsh living conditions are making it less of a priority writes Sada al-Sham. 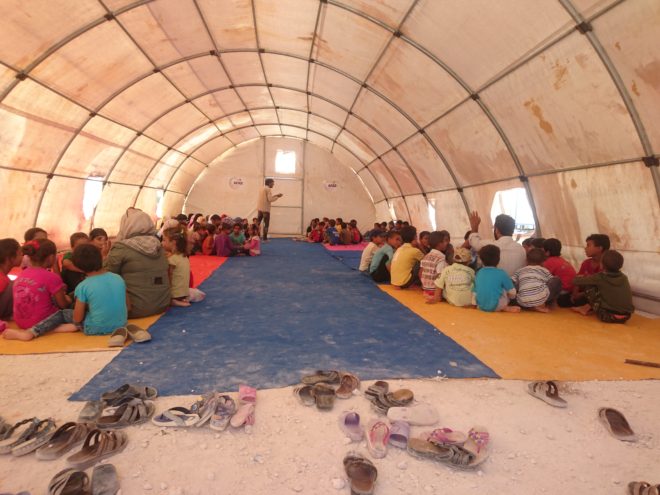 Primary school student Salma is just one of the children who was displaced from eastern Ghouta to the southern Idleb countryside. Salma told Sada al-Sham that she came with her family to Idleb at the end of the school year. “A year has passed, and we are living in a shelter and I do not go to school. I hope to live, my family and me, and not to die in the bombings. When I went to school after the displacement, I noticed that they were ahead of us in the curriculum, and I did not advance even a little, and then my family moved to this area, and I lost the entire year.”

Abou Radwan, 53, a father of a number of students now living in a camp in the Jabal Zawiya area, had been living in an area on the outskirts of Ghouta, before bombing forced him to move inside Ghouta. He told Sada al-Sham: “We had hardly settled down when the regime advanced and displaced us again. We were far from a school, and my children didn’t learn anything. Saving our lives came first, as they say. Here we can’t send our children to school because of the harsh economic situation. One of them is 13 years old and doesn’t know how to write his name.”

Idleb province has received thousands of displaced students from other areas and the Education Directorate there has prepared to begin the eighth school year since the revolution, amid fears and expectations of a likely attack by regime forces and its backers in the area.

In one of the camps on the Turkish border, Munir al-Jadoua, the director of a primary school in the al-Karama camps area, said that the biggest problems displaced students face was “the difficulty of accepting the new situation, and the difficulty of acclimating with the housing (the tents) and the school (tents or rooms covered with tarp unequipped for proper education).”

He told Sada al-Sham that the difficulties students face include “fear and isolation. They are scared of others and it is difficult for them to make relationships and new friends. They cry and are nostalgic for their old home and friends. They compare their new situation with the old and this creates despair and psychological exhaustion, as well as an inability to acclimatize to the new teachers and relate them to their old memories.”

He said that “they look bleakly towards the future and don’t see a need for learning or education or what they will achieve from education now that everything is gone.” Likewise “there is a need to work to secure a living due to the poverty and the loss of breadwinners,” which also imposes hardship.

Mahmoud al-Hassan, a language instructor in a secondary school in the Idleb countryside, said in an interview with Sada al-Sham that the displaced students who came to their school have a severe education deficiency, and that they also suffer from terror and sometimes find it difficult to integrate with other students.

The teacher added: “In this secondary school, we had a student come to us last month from Ayn al-Fijeh who had mismatched clothes and also had a low level of education, which forced the teachers to delay the curriculum and to review until the student was able to accompany the others.”

Rateb al-Ali, who was an education official in eastern Ghouta and was displaced to Idleb province, said that “when the displacement to Idleb occurred, the students and parents faced the problem of stability, as many of the families had changed their place of residence numerous times in search of greater safety, as well as looking for work. Given this, the issue of education fell to the backseat for the family. A number of Ghouta's students were entered into accelerated education centers established by the Idleb and Aleppo directorates this summer and continued for two months. The main targets of these activities were students displaced from Ghouta and other areas. However the rate of enrollment in these centers was small because of what I mentioned earlier.”

The Education Minister in the Syrian Interim Government, Imad Barak, told Sada al-Sham that many students who were displaced from Ghouta had their situation rectified when they were registered in schools, with some of them registering for examinations. For others displaced from the Damascus countryside and elsewhere who were not able to enter exams, a decision was issued to carry out a preparatory course for them, whereby they have to right to offer all subjects and not just two subjects, as is the case for students of the region, because most of them had been displaced during the exams period.

He added: “We allowed them to enroll in the closest school and we secured all educational necessities for them. In the ministry, we set up a department known as the Department for Displaced Persons Educational Affairs. In the camps we also registered displaced students who settled there, and we will establish schools there as part of a plan that has been drawn up.”