Local councils in the free provinces in Syria carry out the missions of providing public service, resolving conflicts among the locals and providing protection 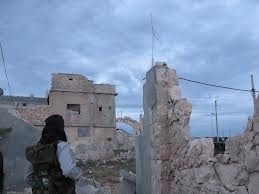 With the regime recently losing authorityover several Syrian cities and towns, local councils, civil committees, commissions and legislative courts have been formed to fill the void. These have carried out the missions of providing public service in terms of aid, reconstruction and other facilities, resolving conflicts among the locals and providing protection for public and private money and public records.With several months of experience, the local councils and commissions recorded a lot of successes but also faced many obstacles:

1-         The multitude of local councils resulted ininternal fighting inside a single town or city.

2-         The ineffectivework showed the weak coordination among local councils in cities and governorates, which reflected negatively on the condition of public services in the town itself.

3-         These councils' work revealed that their competence is directly related to a political dimension that targets authority over public life in the town or city, imposing a single political color and making it a condition to provide service.

These developments have negative results and they may have a long-term effect; if they continue, they would threaten the unity of the country bydeconstructing the general administration on the national level in an irreparable way. They also hinder the creation of an alternative general national political area with a democratic depth, which is in turn an actual guarantee of national decision making independent from the regional and international interactions. Unfortunately, these interactions became the main regulator of the revolutionary movement both in the field and in politics.

What these local councils produced can be built upon and restructured and this happens actually on the ground. Improving the difficult reality requires modifying the work of local councils and commissions by following these essential principles:

–           The goal of local councils and commissions is to find a practical, local solution to face the challenge of providing public services while dealing with the conditions of the revolution and the destruction imposed by the regime, ultimately establishing a public life dominated by the principles of freedom and dignity on all Syrian soil.

–           The immediate task of the local councils is to face the challenges of saving and administrating public life during the revolution and the destruction practiced by the regime; the task is not struggling over the form of rule which will govern the country after the revolution.

–           Overthrowing the regime cannot be completed without saving the state's institutions for the post-regime stage and enabling these institutions to be built upon the principle of giving the priority to the freedom and dignity of Syrian citizens.

–           The work of these local councils at this stage doesn’t require the creation of new institutions but rather the revivalof Syrian institutions existing without the regime or the retrieval of those under the regime, giving them to the community, so that these institutions can effectively keep up with community life concerns and perform their original role of serving the Syrian citizen and protecting his rights and interests neutrally.

–           The local council should be always open and able to involve all the components of the local community, including those didn’t participate in the revolution. It should be also able to provide the conditions by which all Syrians can meet and discuss their common affairs despite the differences in their opinions and affiliations.

–           To make the work of these local councils and commissions effective and to guarantee the unity of the country, work should be coordinated in a uniformed way on the national level, both in the "liberated" zones and in those still under the control of the regime.

–           The revolution remains a temporary situation and the administration of public affairs and necessities cannot be treated and understood from a bureaucratic technocratic point of view. The local, regional and international objective data revealed that the conditions to enable this are not available yet.

–           Giving the state's institutions back to the society requires local councils and commissions at this stage to practice general administration without exceeding the necessary: supporting people's stability during the revolution, providing general services and saving the money and records of the state as well as its national wealth resources, both economic and cultural ones.

–           The local council or commission in a city or town is the basic unit upon which any further coordination should be established and it should follow the administrative division of cities, towns and villages already in existence. These divisions will be discussed later under legitimate and constitutional conditions after the fall of the regime.

–           To make the coordination tight and effective on the town or city level andthe national level, all the active forces in the town or city should agree on forming a single council or commission that involves all the councils and commissions active on the ground. If there is more than one council, commission or court that has a different subordination to a brigade on the ground, the responsibility of this commission is to neutralize public services from political conflict, so that these services can be provided justly and with no discrimination.

–           Local councils, either on the city, town, governorate or national levels, need to regulate their work according to unified procedural regulations. This can be done quickly by large scale consultations within one council untilthey agree on a sample list of regulations and this list can be circulated among the existinglocal councils in order to unify their procedures and among the newly formed local councils to adopt them. This mechanism is already in use by local councils and commissions in some Syrian governorates. There is no trouble in studying and adopting the procedures regulating the work of local councils in the local administration law, but this should be after the agreement between local councils and commissions on the national level to eliminate all the texts and procedures that guaranteed the authority of the regime without achieving any procedural justice and any equity among citizens. In any case, there should be balance: local councils of Syrian governorates should follow unified regulations, but these regulations should be flexible for each local council in order to face the challenges in organizing public matters on the local level and in every town.

–           Local councils should invite government employees responsible for the state's service institutions, especially those famous for being honest, both personally and professionally, to start their work according to their specializations and active regulations. Regulations that guarantee the authority of the regime and ignore justice among Syrians should be eliminated. This procedure should be coordinated and unified on the national level.

–           Local councils of each governorate elect a representative to be a member in the higher national council. This member should have the experience and professionalism that qualify him to carry out the administration of public affairs.

–           The higher national council of local councils and commissions selects one of its members to administrate each specialized office and administrators should exchange their offices according to organizational procedures already regulated.

–           The higher national council specifies policies and makes executive decisions on the national level to provide resources for local councils and state institutions which work under its command, especially considering employees' salaries and local councils' compensations and allocations.

–           The higher national council makes executive decisions to develop resources and national wealth properly; this wealth comes either from taxes or the income of minerals, livestock and agriculture. The council guarantees that the income would be delivered to Syrian regions justly.

–           The higher national council specifies the general unified strategy to administrate various public facilities from a perspective that takes into consideration the whole country and prefers relying on national wealth resources and saving and administrating them transparently and wisely to uphold the independence of national decisions.