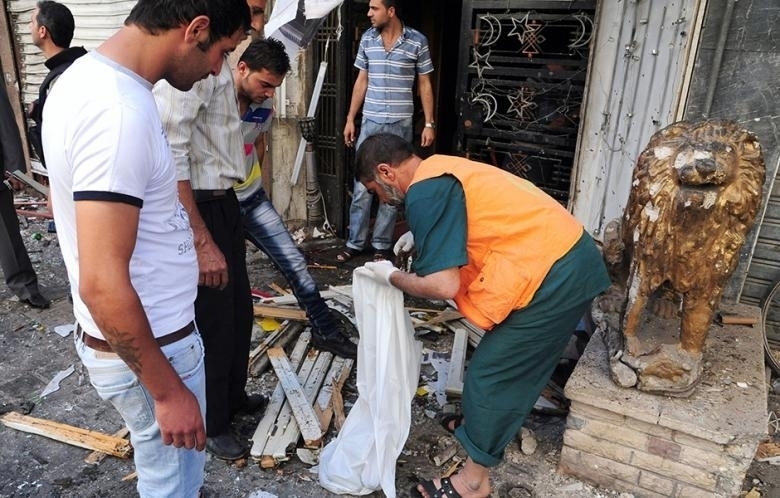 Near Damascus’ Marjeh Square and Thawra Bridge, a market has emerged where vendors peddle the detritus of war. Stalls with worn-out wooden bases line the place, whimsically known as Souk al-Haramieh, or the Thieves Market.

Recordings of Syrian pop music can be heard from the market’s entrance. Here, one can find anything from second-hand tools and furniture, to sewing kits and other household wares.

Yahya sits behind a metal desk plastered with photos of naked women. His trade is pornographic films. “Business is good,” he says.A vendor peddles a brand-name flat-screen TV at a bargain cost. When a customer buys the TV, the vendor gives him a small present, saying, “Take this mini TV for 2,000 Syrian pounds ($20).” Little did the vendor know that this “mini TV” was actually an iPad.

This site used to be occupied by a produce market that was closely monitored by the government. At the time, the stolen goods-stalls were confined to a small corner. Now that the produce market has relocated to the massive Souk al-Hal in the Zabaltani district, the hawkers have expanded their businesses.

Though the entrance to the old city of Damascus sits on part of this market, the Syrian government, for reasons unknown, has allowed this chaotic commercial sprawl to expand. Perhaps the explanation lies in just how bad things have become.

In one corner of the souk, Yahya sits behind a metal desk plastered with photos of naked women. His trade is pornographic films. “Business is good,” he says. “Dozens of people buy the films at 50 Syrian pounds (SP) (50 cents) each. Maybe after the crisis people have no other way to have fun!”

Abu Ahmad, who owns a stall selling used clothes, says, “Damascus’ economic gutter – that’s what the merchants in Hariqa, Midhat Pasha, and Hamidieh call it. They mock it and the people who trade here.”

“Those big shots left us nothing. They manipulate the exchange rate, they monopolize goods, yet no one holds them accountable,” the man adds. “They are complicit in choking the people and aggravating their humiliation and deprivation.”

What matters today is that you don’t take part in protests or take up arms against the government. Other than that, do whatever you like. Sell stolen goods, heating oil, gas, or bread, and no one will say anything.Across the market, a soldier approaches the checkpoint at Thawra Bridge, stopping to chat with one of the cheap liquor vendors based there. The vendor, who was driven from the eastern Syrian city of Deir Ezzour more than a year ago, speaks about the difficulty of making a living in a harsh economy dominated by big merchants.

“I work and sleep at this place. I sold my wife’s jewelry for SP75,000 ($755), bought a second-hand refrigerator, and set up shop here selling cheap, locally made liquor,” he says.

One of the market’s alleys extends into a cluster of stalls selling produce at wholesale prices. These vendors’ profit margins are meager, no more than a few pounds, yet the system works out decently for them.

The Thieves Market remains the cheapest – and most atypical – option for goods in Damascus. Its social composition has become more diversified with the influx of displaced persons and hawkers from south of the capital, with battles raging in areas like al-Hajar al-Aswad and al-Dahadil.

Many have found refuge in this market, living in makeshift homes of blankets and tarps. Abu Fahed (not his real name) is one such internal refugee. A barber, he was able to salvage some of his tools and now offers his services to the street vendors and passersby.

Meanwhile, according to Qusai, a young man who sells used mobile phones set atop a neat plastic box at the center of the market, the police have stopped coming after the vendors. The youth, who hails from the Wafidin Palestinian refugee camp, says, “What matters today is that you don’t take part in protests or take up arms against the government. Other than that, do whatever you like. Sell stolen goods, heating oil, gas, or bread, and no one will say anything.”