The puppet artworks send a loud and critical message to the tyrannical regime, mocking its leader, who last year told Russia Today TV"I am not a puppet of the West and I will live and die in Syria" 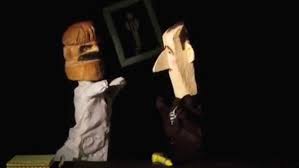 'Matte Straw' is a Syrian artists group including both professional and amateur artists expressing their opposition to the Syrian regime through the creation of puppets and caricatures.

The puppet artworks send a loud and critical message to the tyrannical regime, mocking its leader, Bashar Assad, who last year told Russia Today television: "I am not a puppet of the West and I will live and die in Syria."

The Matte Straw team, which worked secretly in the first months of the Syrian revolution, fearing detention, has put a life-sized head of Assad on a puppet, describing him as "the little dictator", and "the first mercenary."

The team is scheduled to participate in the Window Festival in London next month, following several performances in Syrian liberated regions, including Minbij.

Zaman al-Wasl met the director and one of the actors in the team, who asked that we use his pseudonym 'The White Camel' for safety reasons.

Q: Why did you choose puppets as a  means to express your ideas and artistic message in fighting Syrian regime?

A: Puppets in themselves are satirical and popular. In Arab artistic heritage we use silhouette and similar forms. Satire is employed as a means to face the violence by mocking it, and consequently destroying it. The majesty and aura surrounding the dictators, either Hafez Assad or his 'little dictator' son who promoted themselves as gods and prohibited from reproach is smashed. We have done what they prohibited for decades… we went to those gods and destroyed them through irony, satire and criticism.

Q: You said that your work mimics the silhouette art forms.  How does shadow come in your work?

A: I didn't say that our work mimics the silhouette art, I said that our history contains puppets like 'Karakoz and Ewaz', which means that the audience is ready to receptive to the puppet form. From this came the decision to choose puppets as means for expression.

Q: 'Matte Straw' is a surprising name for those don’t know the beverage. Why did you choose this name and how is it significant?

A: Matte is a popular beverage in Syria and it is known well among all Syrians. At the same time, it is a social beverage that brings people together, as the matte needs two people at least to drink it. The Syrian regime tried to separate people and attempted the impossible in prohibiting people from gathering in one place. That's where the idea of matte as a popular beverage that gathers people and motivates them to talk and discuss came from. Matte is also the beverage of all Syrians, no matter how different their sect, beliefs or cultural backgrounds.

Q: But this beverage has become associated somehow with a specific sect and became a subject for satire, especially with the start of Syrian revolution. Did you take that into your consideration?

A: That is correct, but if you think carefully, you will find a wide range of Syrian society drinks this beverage. What we wanted to say was: there is no monopoly on anything. This a typical Syrian beverage just like any other idea or place or beverage. By the way, we didn’t mean to talk about a specific sect, or to make the idea sectarian. Our team, for example, gathers Syrians from several sects and backgrounds and they all are matte drinkers, both men and women.

Q: You work as partners. To what extend has this helped your work succeed?

A: The basic secret of our success is our openness towards the different ideas we all share during the formation and discussion stage. At the end we reach a formula on which everyone agrees –  but of course with respect to the director's opinion.

Q: You performed in many liberated regions. Can you tell us about this experience and how it was received by your audience?

A: It was a great experience for us. The people taught us that life should go on; that despite pains and death and all this violence, there is still a desire to live on. The most important thing we learned from people was that this revolution is a revolution for life, not death and that people live in solidarity, with tenderness and cooperation and try to live normally, despite everything.

Q: You have been invited to perform your shows in Britain soon, what does this mean to you?

A: Of course this is a precious opportunity to report scenes from the Syrian revolution to people abroad. Specifically, we want to impart the devastating massacres committed against the Syrian people. It is an important opportunity and we are happy for the invitation.
There is also an exhibition in New Jersey in the U.S. coming up. This is very important for us, especially after the attempts by the regime to portray the revolution as violent, extremist and ugly.

Q: What funding do you get? Are you self-funded or is there an artistic institution that funds your work?

A: At first we were self-funded, but you can't continue this kind of work without funding, especially because of our needs and the equipment required such as cameras, lighting, decoration, dress design and travel costs. We asked for funding from international and independent institutions such as Hivos and Prince Klaus, which are famous Dutch organizations.There are a lot groups who helped us, including the Half an Apple Group, Syrian Bear, Syrian People Know Their Way, as well as other activists.