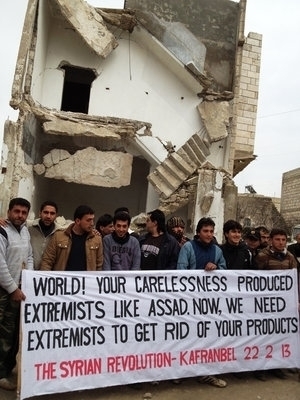 If the news about the killing of Father PaoloDall’Oglio is true, it means that the Syrian revolution has made a jump towards the unknown.

The death of Father Paolo has been reported by different sources, accusing different parties. The Britain-based Syrian Observatory for Human Rights claims Father Paolo Dall'Oglio has been executed by jihadist rebels in the city of Raqqa.

"Activists in the city, and who are close to Father Paolo, have confirmed to the SOHR that the Italian Jesuit priest and the messenger of peace Father Paolo Dall'Oglio has been killed while in the prisons of the Islamic State of Iraq and Syria (ISIS), where he has been held for over two weeks," the SOHR said.

A reputable Syrian news website, Zaman al-Wasl, quoted a Syrian activist as saying that the “Syrian intelligence has penetrated the ranks of the Islamist groups and contributed to the murder.” “The Assad regime should carry full responsibility,” said Lama Atassi, the secretary general of the Syrian National Front.

There is little difference whether the ISIS killed Father Paolo at the orders of the Assad regime or at the orders of Al-Qaeda commanders. In both cases, the Syrian revolution has changed its face and its mission. The fact remains the same: the Syrian revolution, which started as a democratic uprising against totalitarianism, inequality, and poverty, has ended up killing the very people who defended the revolution and called for Assad to depart.

Father Paolo was at the heart of the revolution. The regime expelled him from the country in which he lived for three decades, calling for dialogue and for love among people. He is the one who spoke loudly since the very beginning, saying, “Our hearts and souls shiver at the barbaric assault that President Bashar al-Assad and his army have led on Syria, its landmarks, heritage, and relics. Why do you grieve when shells hit the Umayyad Mosque? Where’s the problem? We have the old maps and plans; and we will rebuild and restore it once the regime falls. The most important thing is that the dictator leaves; the rest is easy.” But this “icon of the revolution,” who took part in all opposition activities that served the Syrian people during the crisis, suddenly became a foreigner and stranger to the Syrian regime. He was therefore expelled from the country because he “exceeded the boundaries of his church responsibilities.”

This person was kidnapped – and most probably killed – by lslamists, who came to Syria, uninvited, to fight against the regime, but ended up fighting against the Syrian people.

Father Paolo was ecstatic to arrive in Raqqa late last week, nearly five months after the city was taken by the rebels. He spoke in the town square on Saturday about the desire for unity, hope, and education as tools for saving Syria. According to accounts of different activists who spoke to Reuters, father Paolo was adamant about meeting leaders from the two extremist groups Jabhat al-Nusra and the Islamic State of Iraq and Syria. His message to them according to the Daily Star was going to be “to stop kidnapping and doing all this dirty stuff,” to put an end to the fighting against the Kurds, and to promote coexistence and openness in treating fellow Syrians.

Lebanese analyst Joyce Karam wrote, “Father Paolo’s fight for a better Syria is threatened by both Assad’s artillery and extremists’ agendas. His fight does not involve kidnapping bishops, banning women from wearing pants, establishing Islamic courts, and killing FSA rebel commanders. Nor does it condone a regime that uses Scud missiles and bomb barrels against its own citizens.”

By going to Raqqa, Karam added, Father Paolo has done what the elite in both the regime and the political opposition would not do. He is Syria’s voice in the wilderness, calling for humanity and tolerance against hatred, for preserving the country’s diverse heritage and open culture. And it is in Syria’s interest that this voice is not silenced.

The news of the killing of Father Paolo triggered a heated discussion on Twitter and Facebook. Activists called Syrians to take to the streets on Friday (today) to renounce the presence of the jihadist fighting brigades. One activist, Anas al-Arabi, wrote, “The regime shall not be overthrown before overthrowing those who climbed on the revolution.

Another activist who lives in exile said that whether the killing of Father Paolo is true or not, the Syrian revolution has reached a point of no return.

Bassam Chaghouri added that the tolerance threshold of the Syrian revolution is accepting the possibility of the killing of Father Paolo: this is the bottom line.

Chants of “the people demand the downfall of the regime,” “the Syrian people are one (united) people,” and “get out, Bashar” have been forgotten now. Instead, we hear chants such as “the people want the declaration of Jihad” or “the Ummah wants an Islamic Caliphate,” while marchers often wave the black flag of Islam alongside the pre-Ba’athist flag of the revolution.

Scholar and activist Salam Kawakibi wrote in his weekly column in Al-Shourouk that the military and para-military forces are destroying the infrastructure and the social fabric, far from the real goals of the Syrian people.

Kawakibi criticized the dominance of Jihadi Islamists over cities and provinces, and stated that these groups are only brave when it comes to assaulting civilians or repressing the civil components in the local authorities in the liberated areas.

The efforts of the Islamist groups happen to fit the regime’s efforts to silence the free voice of the Syrian people. Therefore, it is merely logical that the regime works hard to arrest civil activists, while Islamists silence those who have different views from theirs. Both parties, at the same time, are happy reaching agreements about wheat and oil.

While the Islamists are hijacking the Syrian revolution, the Syrian opposition is totally silent. The National Coalition issued a poor statement on Thursday asking to uncover the fate of the pro-revolution celebrity in a province that theoretically falls under its authority. The statement did not even bother condemning the kidnapping of the priest and or taking any political (or otherwise) action against the group that kidnapped him.

The Syrian Coalition “urged” that FSA battalions and the Local Council in Raqqa to “take any possible steps to ensure the safe return of Father Paolo. The Coalition stresses the need for all Revolutionary Forces to commit to the guiding principles of the Syrian Revolution including protecting civilians as well as journalists and clerics.”

But the farthest it could go to was to emphasize “that public freedom must be enshrined in the Syrian Revolution's guiding principles and respected by all Revolutionary Forces.”

Kawakibi says the National Coalition is “suffering from the childishness of some members and from the psychological illnesses of others, in addition to the personal benefits of a third party through their foreign connections.”

Has the time arrived when the Syrian people question their revolution?