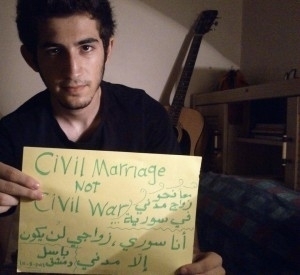 Editors’ Note: All names are pseudonyms.

Khaled and Mona married in Syria in April 2012. It was an unusual marriage: he is a Sunni Muslim and she is from the Ismaili sect. Still, their families accepted the intersectarian marriage.

A Syrian calls for the adoption of civil marriage. Credit: "Civil Marriage in Syria" page on Facebook

“The issue never came up in my family, and when my husband came to them to propose, they dealt with him solely on the basis of his character and his treatment of me,” added 35-year-old Mona, who was born into the Ismaili faith.

Khaled says he and Mona don’t consider themselves part of any sect, and neither do their families.

“We live outside a sectarian framework, so there was no issue with our getting married,” said the 46-year-old Sunni school teacher.

Still, Khaled and Mona try to avoid mingling with their neighbours, most of whom do not know their religious affiliations. But they say that the rising sectarian tensions in Syria have not affected their marriage, mainly because their families and friends are very tolerant.

Other Syrian couples who married across sectarian boundaries, however, tell a different story.

Fatin, 32, an Alawite housewife with a university degree, married a Sunni man nine years ago.

“We faced many obstacles, the first being my family’s refusal to allow me to marry a non-Alawite man,” she said. “They justified their stance by saying they were worried about me being a stranger among his family, unloved and disrespected and far from my environment. But I was convinced of my decision and I went through with it.”

The situation has become more difficult for Fatin since the start of the uprising. The political gulf separating her from parents widened as a result of severe disagreements about the uprising. She was forced to move away from her parents and siblings, and to cut off all communication with them except during major family events.

Her husband’s family also has a hard time accepting her because of her sect, despite their shared support for the Syrian uprising.

“I wore the veil to appease my husband and his family, and I adopted their customs to preserve my marriage and my children,” she said.

Although Fatin revolted against what she called a “society lacking freedom, not governed by the rule of law and citizenship,” she believes that like any other woman, she has paid the price of living in a regressive society, regardless of whether she married of the same sect or not.

“In my case and in light of the current situation, I live a double oppression. A woman like me pays the price for her choices, estranged from her environment and family,” she adds.

Abdullah, 41, an artist of the Sunni sect, spoke of the difficulties he encountered due to his marriage last year to Sana’a, 33, an Alawite government employee. Both of them are from the Homs countryside. Abdullah said his wife’s family was reluctant to approve the marriage, and eventually only approved the nuptials out of fear the couple would elope. He says sectarian incitement has not affected his marriage.

“We agree on things and disagree on others just like any other couple,” he said. “We argue about cleaning the house and the amount of salt in the food and leaving hair in the sink. Our religious differences do not, and will not, affect our lives because we are both secular,” he added.

Syrian law does not prohibit marriages between different Muslim sects, so changing one’s sect to get married is unnecessary. However, Druze men are required to relinquish their faith.

“Despite the fact that the Druze are a Muslim sect, they have their own religious courts,” said lawyer Ayham.

Ayham says Article 307 of the personal status code exempts some Islamic Sharia laws from being applied to the Druze, and that the Druze court requires that a married couple both be Druze, since one cannot convert to the Druze faith.

To a large extent, the same applies to the Christian sects, which sometimes stand against marriages among Christians from different Churches and categorically reject marriages with Muslims.

Syrian personal status law requires Christian men to relinquish their sect and embrace Islam if they want to marry a Muslim woman. According to Article 48 of the personal status code, the marriage of a Muslim woman to a non-Muslim man is void. On the other hand, a Christian woman may keep her membership in her sect if she marries a Muslim man, although Article 264 of the personal status code denies her any inheritance rights. In addition, there is strong social stigma against such marriages, which may include estrangement, banishment, and even murder.

Misha, 26, a Christian master’s student in journalism, decided to marry an Ismaili man in August last year. He converted to Christianity with his parents’ approval in order to win the approval of Misha’s parents. They were married in a church in Lebanon, and the couple has recently moved to the United States after Misha was awarded a scholarship to do graduate studies.

“We believe in secularism, but society and law in Syria force one into a specific sect,”

“It is not just patriarchal culture that opposes anything unfamiliar to established social norms and outside the power of the family and society. The main problem is that the state, through law, does not protect individual’s autonomous choices, but rather protects patriarchal culture particularly as it pertains to controlling women’s bodies,” she said.

It is notable that Misha and her husband were unable to register their marriage in Syria, since her husband is an apostate according to Sharia law. He may yet be punished, if not by the state, then at the hands of religious extremists.

“Removing legal obstacles to a civil marriage law that ensures the full rights of both partners is the key to security in a future Syria,” said Misha.

On the legal level, however, the situation is more complicated. Civil marriage implicitly requires the adoption of secularism, which currently does not exist in Syria despite the ruling party’s claim to the contrary.

“The Baath Party presents itself as secular when in reality it has only the outer shell of secularism,” said Mahmoud, an academic researcher on politics and religion in Syria who did not want his full name printed.

“The evidence is there, not least of which is that a real secular state does not impose Islam as the state religion in its constitution,” he said, speaking of current Syrian law.

“Nor does it require a Christian man to relinquish his religion if he marries a Muslim woman, while also making it illegal for a Muslim man to convert.”

“This is enough to prove the Baath state’s false secularism,” Mahmoud said.