Abu Wael, a paramedic from the town of Zamlka, says he chose the colour yellow for these masks because it reminds children of the cartoon character Sponge Bob 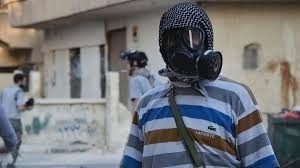 Fear of another chemical attack is still present here in this town of  approximately 25,000 people outside Damascus. More than 300 people were brought to the medical centre here when the Eastern Ghouta region was subjected to a chemical weapons attack on August 21. 27 peopled died in Hamouriyeh’s medical center, just a few of the 1,302 Syrians alleged to have been killed in the attack, according to the Violations Documentation Centre in Syria. Eight of the injured were paramedics from Hamouriyeh who inhaled toxic gases while rescuing others.

Abu Wael, a paramedic from the town of Zamlka, says he chose the colour yellow for these masks because it reminds children of the cartoon character Sponge Bob.

Abu Wael, a paramedic from the town of Zamlka, says he chose the colour yellow for these masks because it reminds children of the cartoon character Sponge Bob.

The harsh reality of war has even hardened the children here. In mid-September a group of elementary age boys sat around on the street and discussed the situation as if they were adults.

The rest agree with this solution, even though the surgical masks they are referring to won’t protect them from deadly gases.

The Eastern Ghouta towns of Zamalka and Ain Tarma received the bulk of the chemical rocket attacks on August 21. Most residents have fled since the attack, but some have returned with a measure of caution.

“Anything is easier than being displaced,” said Oum Khaled, a Zamalka resident who has been forced to leave her home several times over the past two years, and left after the August 21 chemical attack.  Two of her sons were killed by the gas. That came after a sniper killed her husband in July.

She returned to Zamalka with her five daughters in September. She cleaned the house thoroughly and washed the clothes that had been hanging on the laundry line several times despite a water shortage, in an effort to cleanse the house of deadly chemicals. That was the advice doctors gave.

“Inspectors came wearing special clothing and masks, fearful for their lives,” she said. “We’ve gotten used to it.”

Um Khaled, 50, has lost 27 members of her and her husband’s family.

“Families in their entirety are gone,” she said, repeating a phrase spoken often by many others. Her two paramedic sons died along with other paramedics due to a lack of gas masks on August 21. Most residents had gone out to help without knowing to take necessary precautions in dealing with the gas, despite the fact that this was not the first chemical attack they had endured. It was, however, the worst.

Abu Wael, 30, a civil defence volunteer and trainer, put a wet shirt over his face before entering houses in Zamalka to assist the injured.

“We were breaking down doors, washing the faces of the injured with what little water we had, carrying them on our backs to the cars of civilians who had come to help,” he said.

According to Abu Wael, he lost many of his paramedic colleagues because of a lack of organisation and training in how to deal with chemical weapons attacks. Despite his repeated efforts to organise civil defence teams, local committees did not heed his calls until tragedy struck.

In September, Abu Wael organised lectures to explain the principles of evacuation to a number of new civil defence teams using an old projector.

Abu Wael also oversees local production of masks containing charcoal, which offer some protection from the gas for up to an hour. It is almost impossible to import proper gas masks to the region due to the current siege. A former toy salesman, Abu Wael made thousands of masks to be distributed at production cost to paramedics, health workers, and those in at-risk areas. He chose the colour yellow for the masks so that children would be willing to wear them.

“The kids see them as the cartoon character Sponge Bob and don’t complain about wearing them,” he explained. “They were afraid of the black masks.”

The effects of the attack are still present on one doctor and anaesthesiologist in one of Ain Tarma’s clinics. Her name is May, and her hands are scratched after having broken tens of ampules of atropine, a drug used to treat sarin poisoning. Residents have asked her how they should respond if Ghouta is hit by another chemical attack.

“Most people are certain that there is no deterrent for the government to attack again and again with chemical or biological weapons, or even nuclear weapons if it has them,” she said.

Most residents describe August 21 as if describing the apocalypse. It doesn’t occur to them to ask who used the chemical weapons.

“We have been under siege and fighting one enemy for over a year. We have no one else to suspect,” said Abu Salah, a member of the local coordination committee in Zamalka. He recalls that the rockets and missiles that started landing the morning after the chemical attacks were the worst that he had seen. He is unconcerned with changes in the international community’s policy.

“With no electricity or TV news it is easy for us not to care what decisions are being made and to focus on our work. No one really cares about us,” he said.