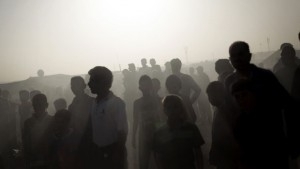 Syria’s border crossings have been in the spotlight again this week, after Kurdish militias in northern Syria fought Islamist rebel groups for nearly three days to secure the Yaaroubiyeh crossing with Iraq.

Ever since the civil war in Syria erupted, rebel groups on all sides have been keen to secure control of border crossings, and with them guaranteed routes to transport supplies crucial to their fight against the regime of President Bashar Al-Assad.

In the days since the Yaaroubiyeh crossing was captured, Asharq Al-Awsat spoke with several people involved in the fight against Assad about the state of Syria’s borders.

Syria’s neighbors—Iraq in particular—have grown increasingly worried by the number of crossings falling into rebel hands as Islamist groups, particularly the Al-Qaeda-linked Al-Nusra Front and the Islamic State of Iraq and Syria (ISIS), come to dominate the opposition groups controlling the borders.

Lebanon, however, does not seem to be worried, perhaps because the majority of its border crossings to Syria are still in the Assad regime’s control. Yet the government there has taken tight security measures at the official border crossings with Syria, a clear sign that rebel groups are making full use of illegal crossings.

And the Turkish government seems to have no qualms about opening its borders with Syria, despite the radical Islamist groups that now control almost all of the crossings along Syria’s longest border.

Speaking exclusively to Asharq Al-Awsat, the head of the Syrian Observatory for Human Rights (SOHR), Rami Abdulrahman, accused Ankara of “facilitating the access of ISIS elements into Syrian territories.”

The border between Syria and Turkey contains several strategic crossings. The Bab Al-Salama border crossing is considered the most important, and large amounts of food and other aid are taken into rural areas of the Aleppo governorate over that crossing.

In an informal agreement with the Turkish government, the North Storm Brigade used to control and administer the crossing.

But following violent clashes with the Al-Qaeda-linked ISIS in July, the North Storm Brigade—one of the many groups fighting under the banner of the FSA—had to retreat. In its place came the Islamist militant Al-Tawhid Brigade, which secured full control over the strategic crossing.

With these changes on the ground, Ankara shut the crossing for a short time before partially reopening it to allow trucks carrying food access into Syria, an anti-Assad activist in Aleppo, Yasser Al-Najjar, told Asharq Al-Awsat.

According to Najjar, the Al-Tawhid Brigade also currently controls the Jarablus crossing, where the “Turkish government is preventing trucks loaded with relief material from entering” Syria, yet at the same time, “allowing individuals to enter.”

The Jarablus border crossing fell into the hands of the Syrian opposition in the middle of 2012, after Syrian troops loyal to Assad were forced to retreat.

While Bab Al-Salama and Jarablus border crossings remained relatively secure after they came under opposition control, Bab Al-Hawa— another border crossing controlled by the opposition— has been the subject of several car bomb attacks. The Turkish government has blamed the Assad regime for the instability at Bab Al-Hawa.

In a sign of a possible shift in Turkey’s opinion, however, Ankara began construction on a wall along its eastern border with Syria in early October, over concerns about illegal migration and potential violence. It has proven an unpopular move in Syria, and only yesterday, November 1, Turkish authorities dispersed crowds protesting the wall with tear gas.

While Turkey has been willing to cooperate with opposition forces controlling the crossings along its borders thus far, but Iraq, in contrast, has imposed tough measures at its Abu Kamal border crossing.

“Movement in and out of this crossing is almost non-existent due to obstruction from the Iraqi side,” the head of the opposition Free Syrian Army’s military council in Deir Ezzor, Muhannad Al-Talla’a, told Asharq Al-Awsat.

There has been only intermittent movement of people and goods over the border between Iraq and Syria during the 31-month conflict.

Due to intense concerns about militant groups permeating the borders, Iraq has kept its Syrian border shut for long periods of time, and even stationed 8,000 troops along the border in advance of local elections in June.

In fact, the border has been subject to such severe restrictions that headlines were made around the world when around 10,000 Syrians crossed into Iraq in less than a week after Iraq’s semi-autonomous Kurdistan region opened the Peshkhabur crossing in August.

In a clear sign at the gravity of the situation, Iraqi prime minister Nuri Al-Maliki and US president Barack Obama issued a joint statement on Friday agreeing that Iraq needed more equipment to fight extremist groups in remote areas along its border with Syria.